I was put in touch with project lead and artist, Professor Neil Brownsword in early 2019, who had been working at Staffordshire University just a few months as our new Professor of Ceramics.

He was looking for advice/ideas on the role interactive technologies could play in both preserving and educating the general public on the stockpile of cermaic molds at Spode.

I invited walking technological encyclopedia Richard Harper to get involved.

While he focused mainly on an automated process for digitally reconstructing a countless supply of moulds, I needed to address access and outreach concerns.

We met in the middle with an update to our Discover prototype. 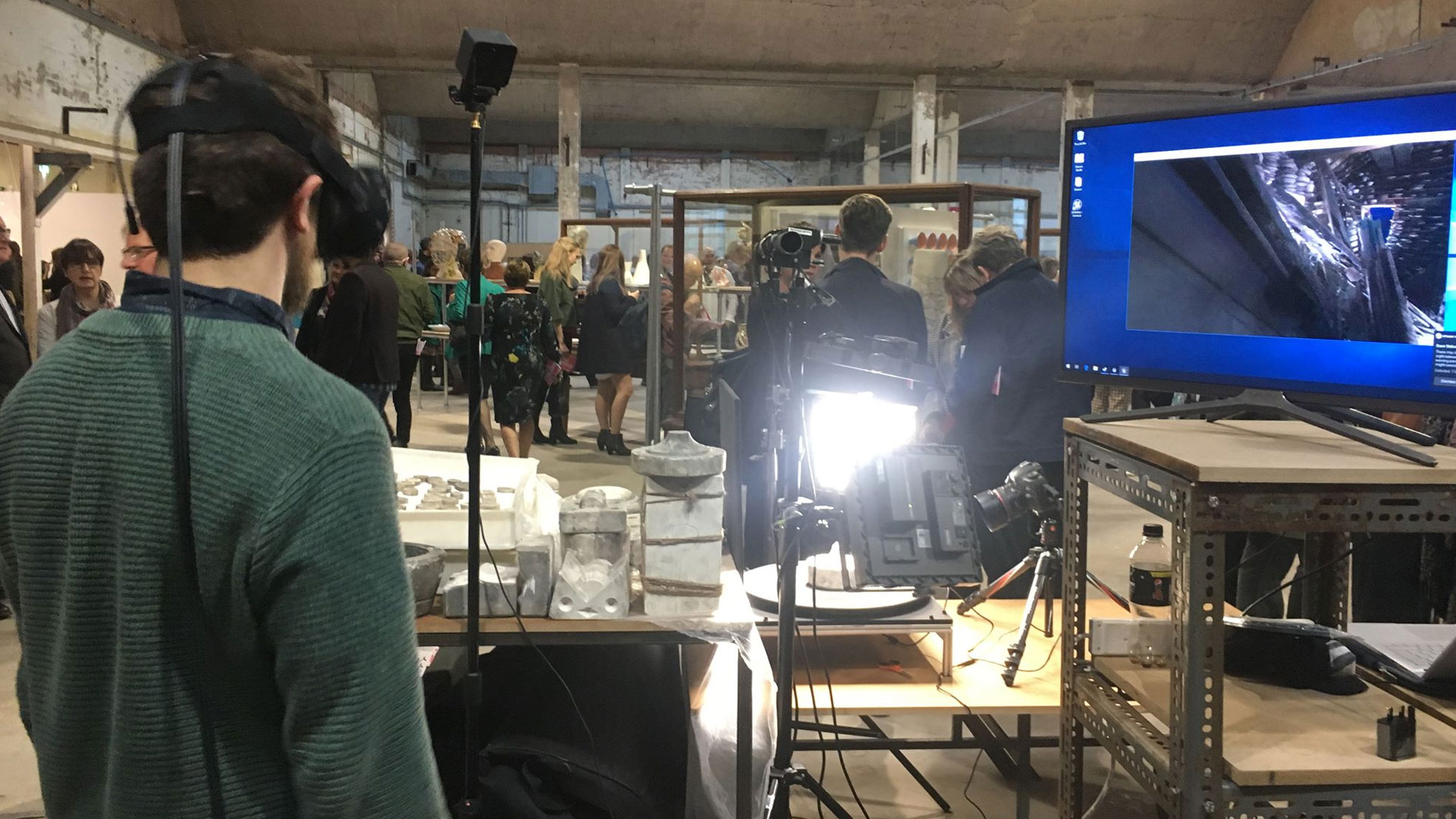 Our stand at the final event, comprising real-time photogrammetry capture, Virtual Reality and a touch screen experience of the restricted areas.

From an outreach perspective, our main goal was to provide the event with some attractions that would make effective use of interactive, digital mediums.

We felt that this would only work if the mediums were employed in such a way, that they would facilitate an experience otherwise impossible.

Spode itself features countless mould stores and buildings which are not accessible to the general public. They’re incredible sights to behold, featuring an endless array of objects which are so intrinsic to Stoke-on-Trent’s culture and heritage.

Due to safety concerns, access is restricted. We felt that therefore reconstructing one of these rooms with photogrammetry and integrating it with our VR prototype, would be the best possible use of the technology. 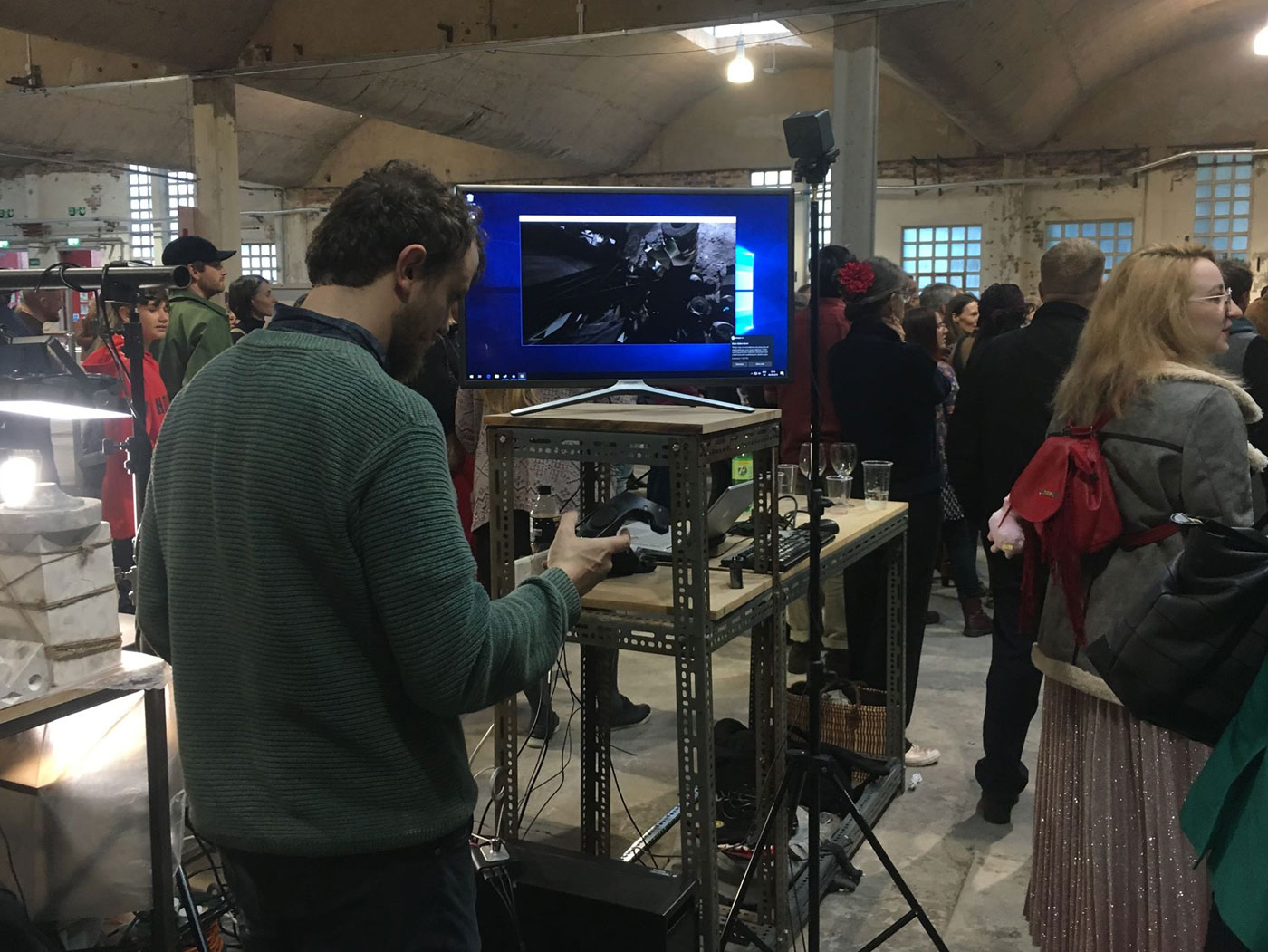 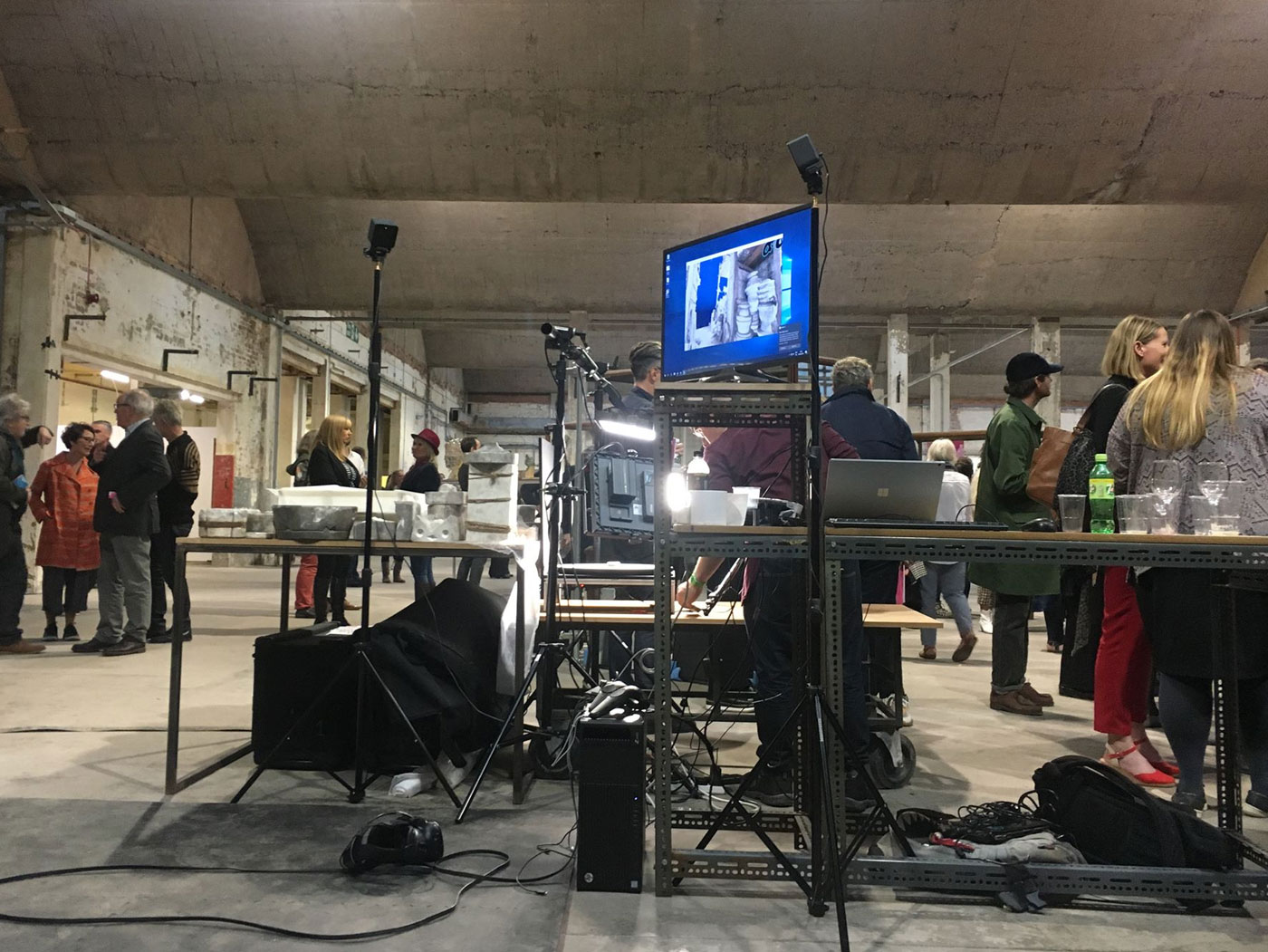 A drawback of VR is that it tends to be a very insular experience and ideally, we wanted to encourage group activities as well.

Rich and I ventured into a number of the restricted mould stores, creating 360 degree panoramas in the process.

I build these into a basic HTML, CSS and JS framework, which we fed into a touchscreen at the event. This allowed people to tour the various rooms and discuss their content as a group.

An additional benefit of this, was that the British Ceramics Biennial were able to upload it to their website, allowing anyone with a phone, tablet or computer to experience these rooms themselves. 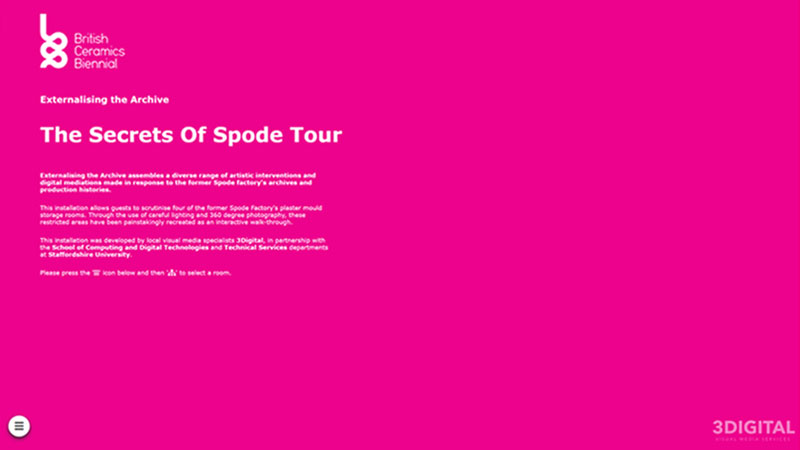 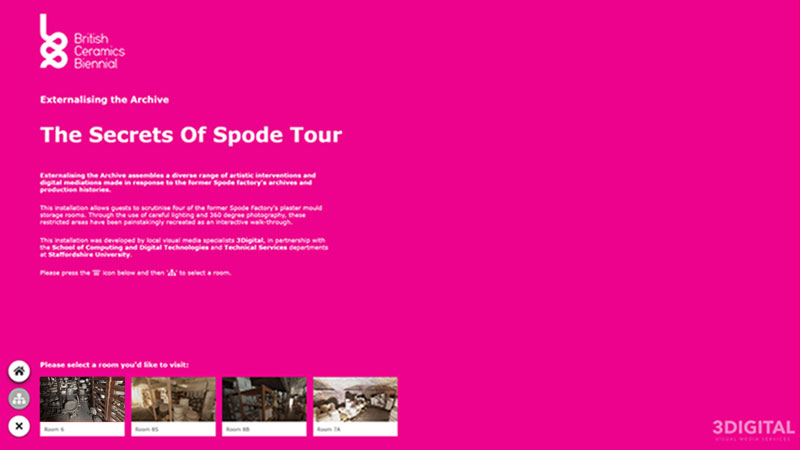 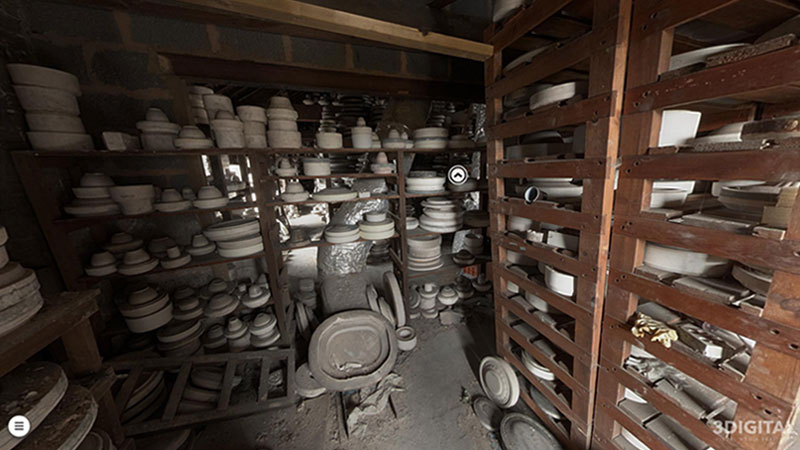 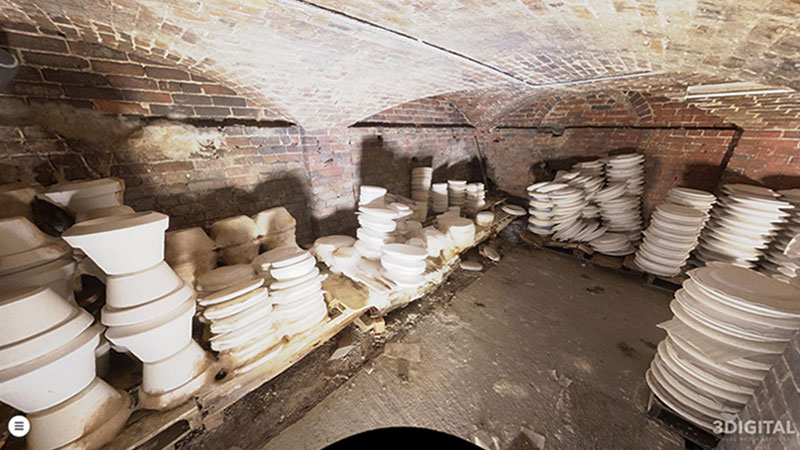 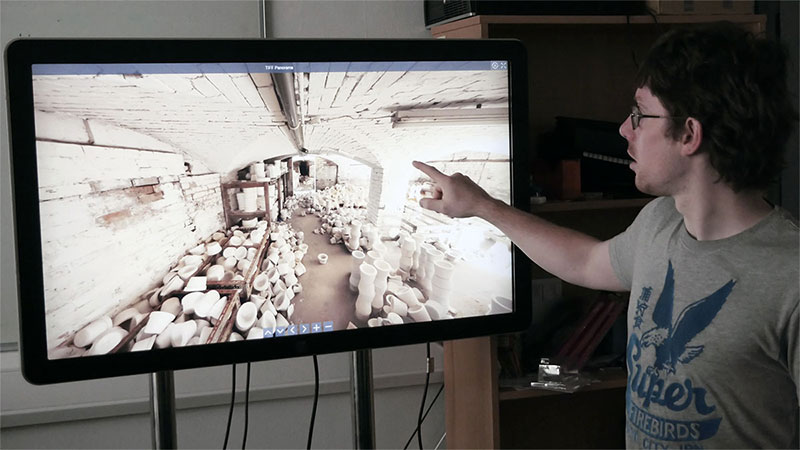 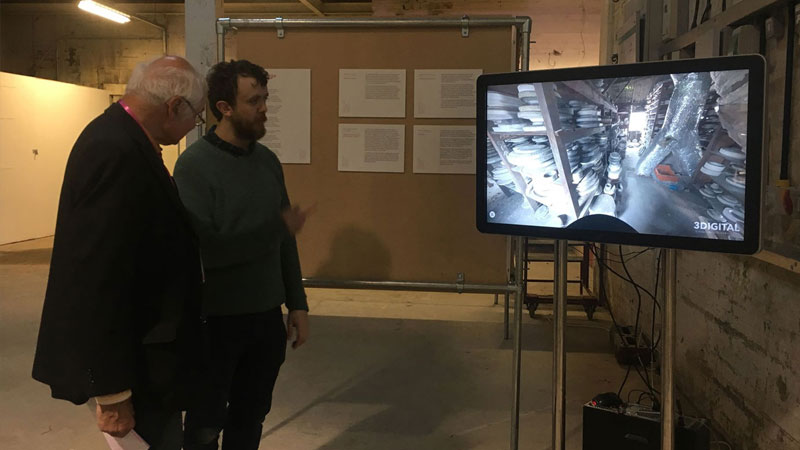