I was recently cleaning up some hard drives and came across an old film project – White Shark tracking in Gansbaai, which was put together during my time at the Dyer Island Conservation Trust and Marine Dynamics Shark Tours.

Watching the video, I was at once struck by absolute disdain for my filming and editing skills (or lack thereof) at the time, and an intense sense of nostalgia. The latter was strange because the creation of the video and the activities showcased didn’t take place all that long ago. Or at least, I thought they didn’t.

So I went onto YouTube to check the publish date… November 26th, 2012. Yeah, ten years ago. Ten bloody years ago!

On the one hand, it was immediately depressing to think it’s been a decade since we were living in South Africa and carefully researching these incredible beasties on a daily basis. On the other, it was a nice opportunity to reflect upon all those experiences and wax lyrical about the joys of tracking great white sharks. 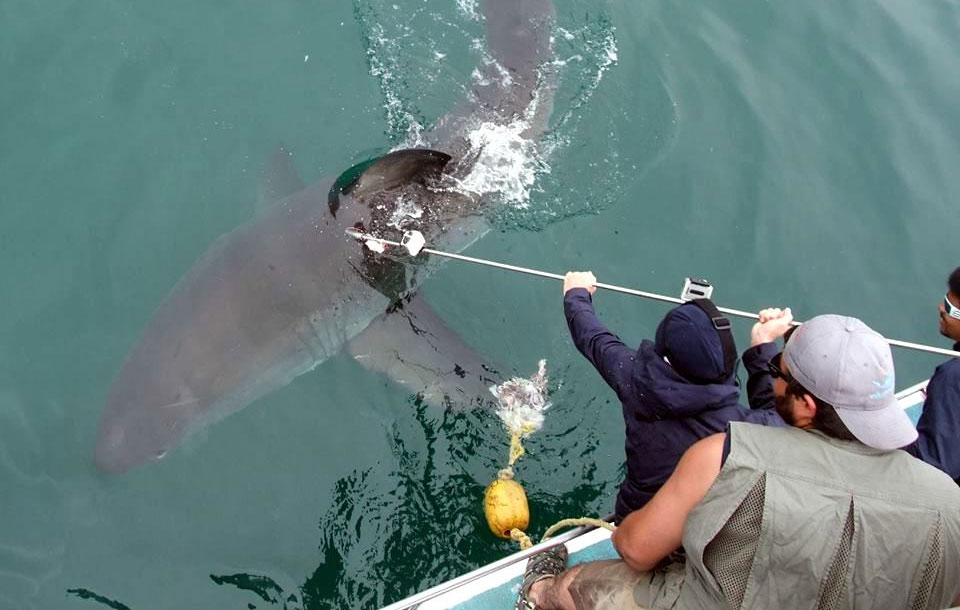 Just so there’s no confusion, ‘tracking’ involves tagging a device to a shark and following it around the sea. Its movements and our observations there of, are essentially ‘tracked’ over a period of time.

The specific method of tracking we used is called manual acoustic tracking, wherein said device emits a ‘ping’ to a receiver on the boat. We used two types of hydrophone to receive that ping. I’ve completely forgotten what they’re called. Such intellectual shortcomings may be somewhat contributory to me not being as involved with shark research as I once was.

Basically, one can receive pings from all directions but at a relatively low distance. This was very useful in instances where we just wanted to confirm the shark was nearby. Most often this would be at the start of a tracking session after we’d been kept off sea for a couple of days. We’d take the boat to a few spots where we expected the shark to be in. The hydrophone would get dropped into the water and fingers crossed – we’d get a ping. 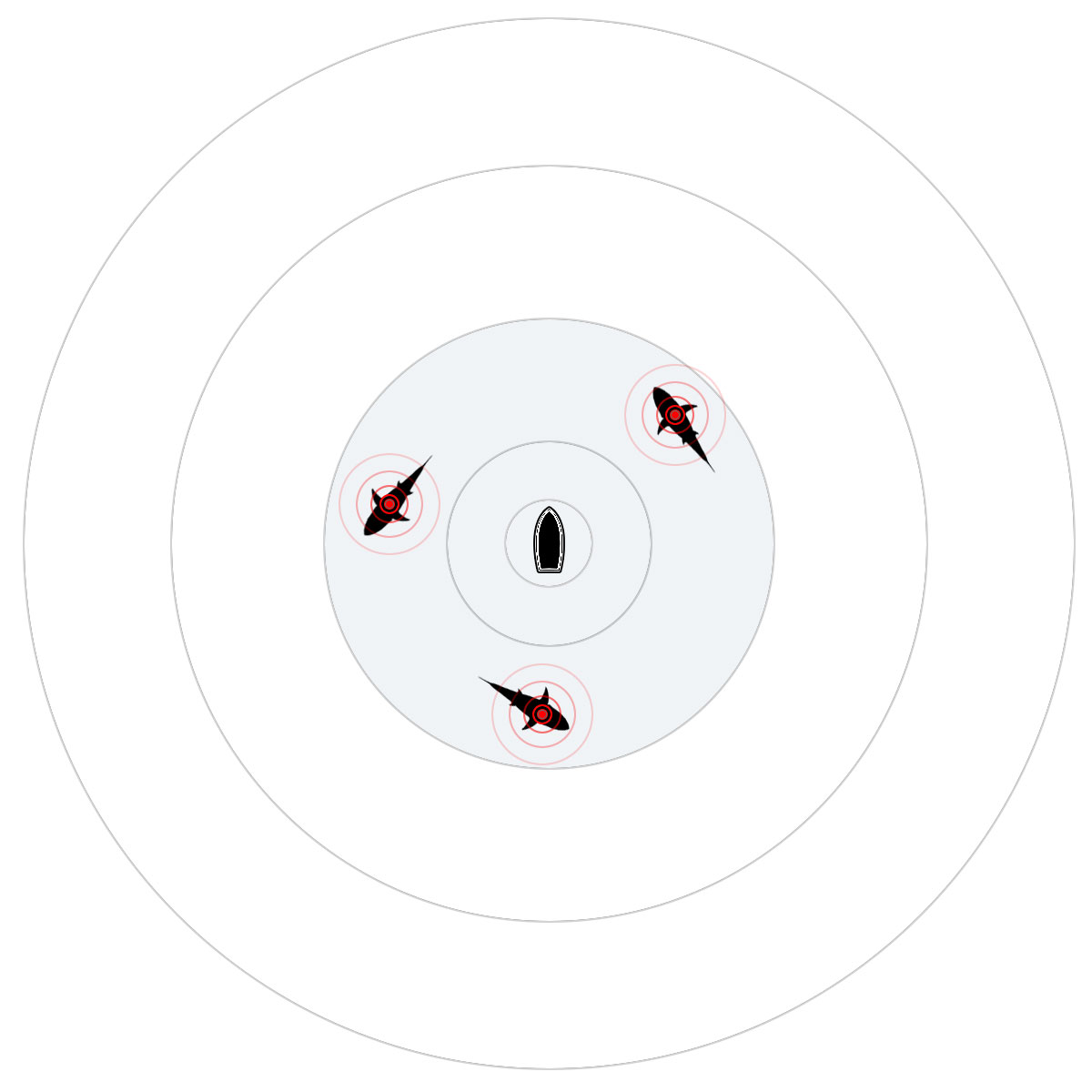 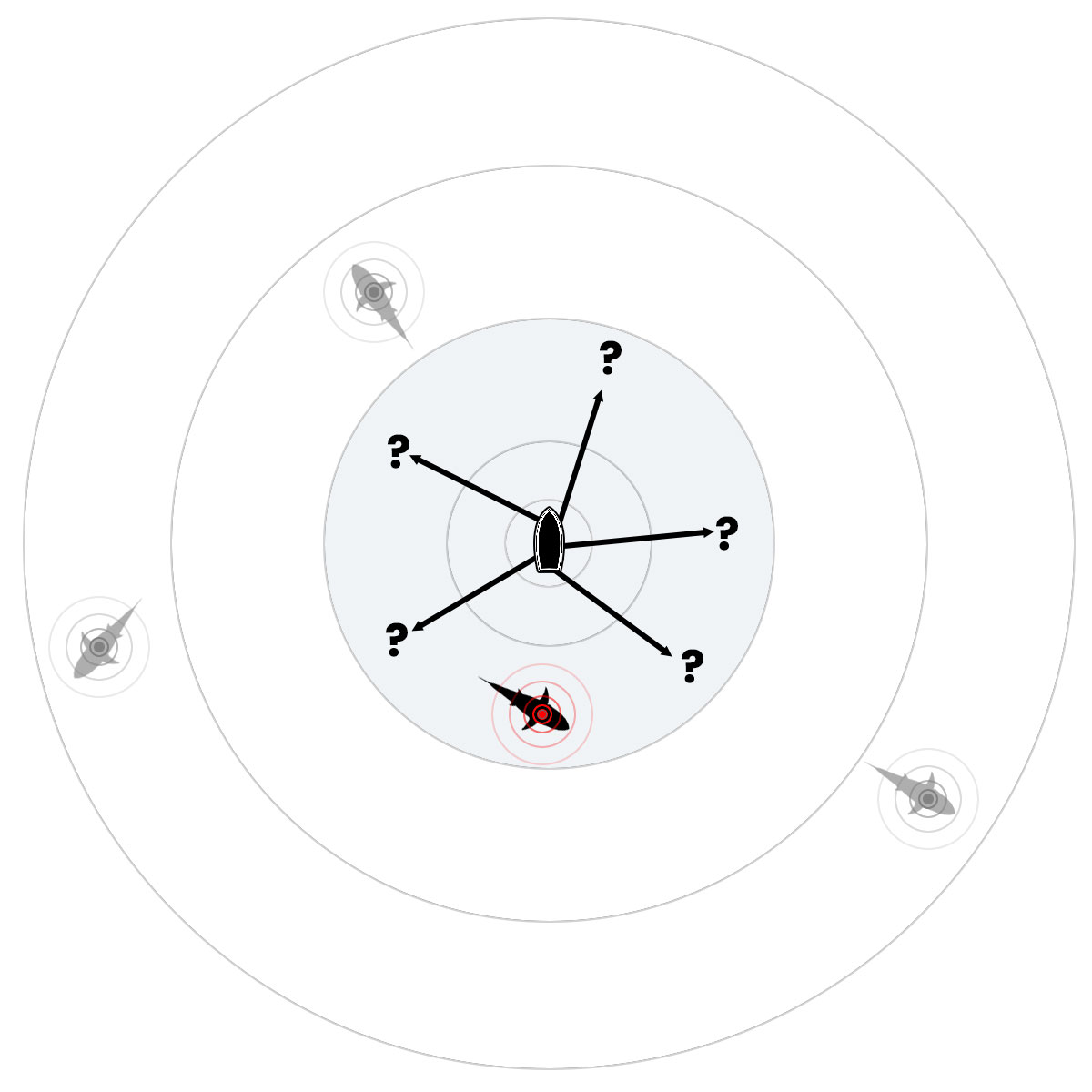 The right tool for a particular job

Once successful, we’d switch over to the other hydrophone. This receives pings from a greater distance, but in a straight line. I (once again) forget wether this is a completely straight line or more of a ‘cone’. I therefore ask that nerds please forgive me if the following illustration isn’t entirely accurate.

Anyway, we used this one pretty much exclusively once the shark had been found. This is because it allowed us to maintain sufficient distance as to not interfere with the shark’s behaviour. However, because this one didn’t receive pings from all directions, it wasn’t not particularly helpful at finding a shark once they’d been lost. So let’s say the shark just darted off in a different direction or had moved behind some unseen underwater obstructions. On these occasions we’d move over to where they were last sending pings from and go back to the previous solution. On days particularly poor in weather, dancing between the two in this fashion was pretty much constant. 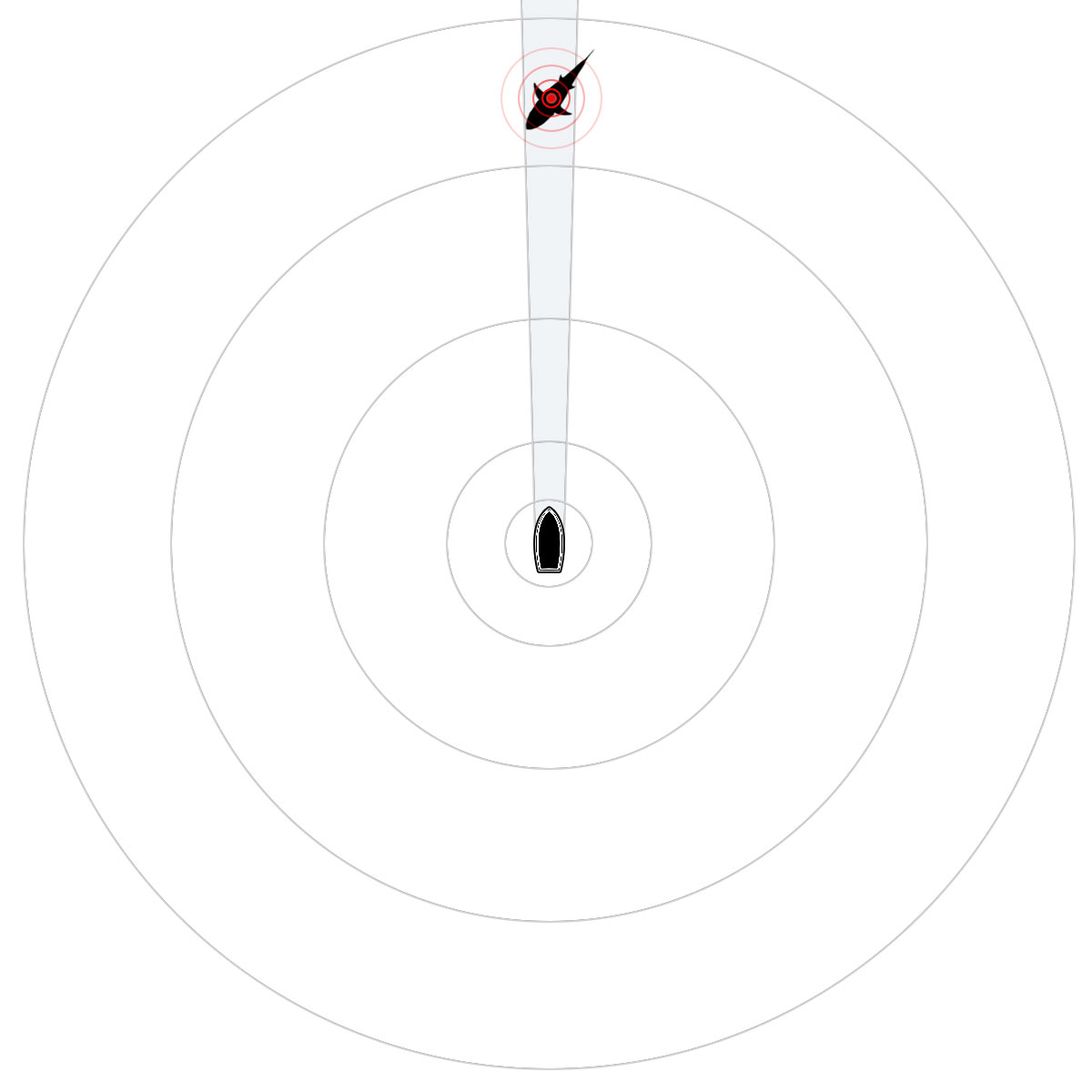 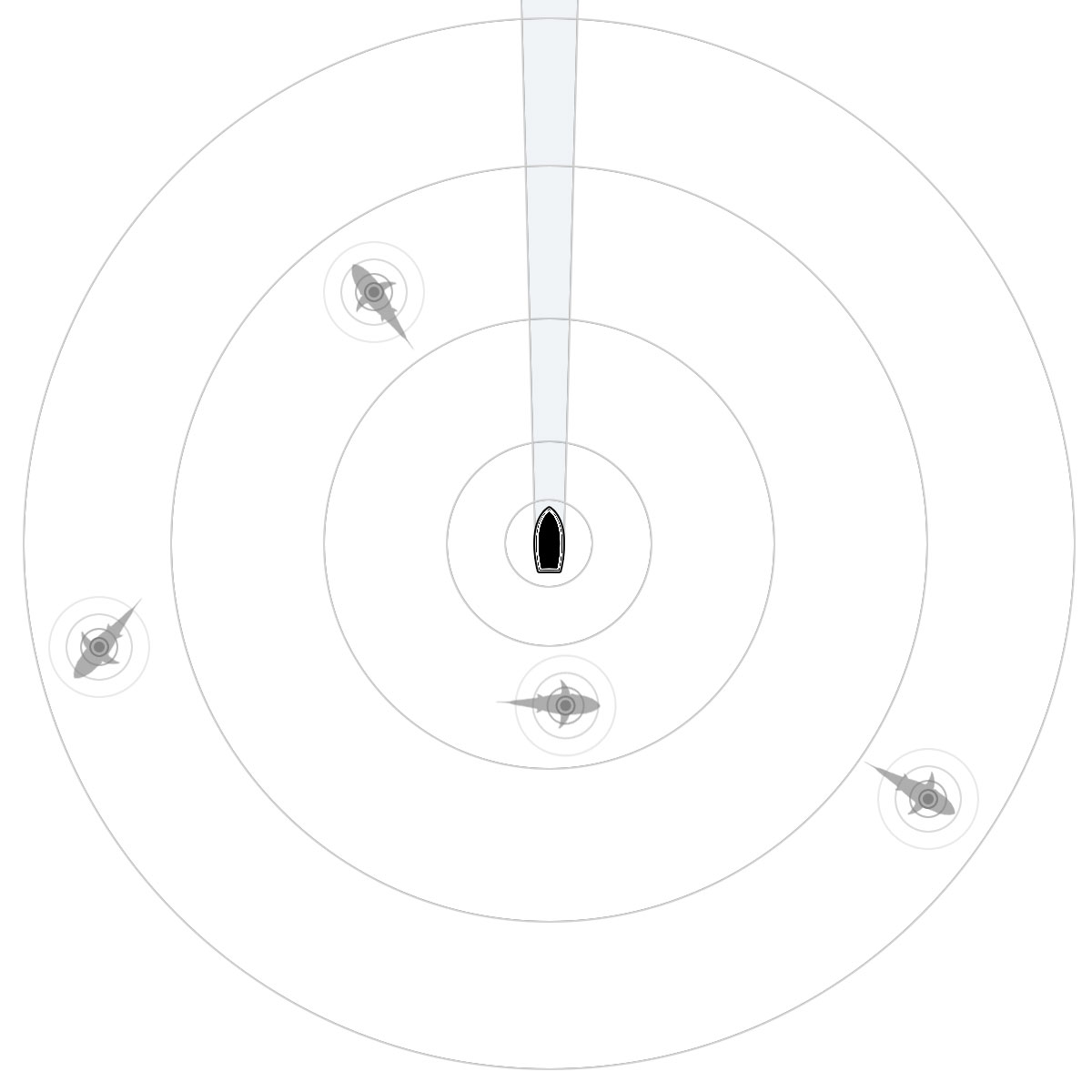 You might be wondering how this ping manifests itself… well, as a ping. It’s literally a pinging noise on the receiver. The louder the ping, the closer the shark, therefore the stronger the signal. We’d basically be at sea for hour upon hour, intensely focusing in on this noise much like a (good) drummer would practice to a metronome. Team’s would typically comprise four people: one skippering the boat, one controlling the direction of the hydrophone, one collecting data and then another for rotation.

My favourite role was always being sat at the hydrophone. I quite enjoyed the challenge of endurance and focus, of keeping the shark ‘in our sights’. This was especially demanding when the shark was at distance and/or there was a lot of noise coming through the receiver. After a while, you find yourself subconsciously trying to get into the animal’s head. You start letting that guide your intuition when feedback from the technology is less than perfect.

What data is sent by said ping?

The tag itself collects some data, such as the shark’s depth and our distance from it. Every team does things slightly differently, but in Gansbaai we kept a constant log of this data. We would supplement it with further observations such as whether seals were in the area. Said data was collected for as long as possible, often for consecutive days and nights at a time. I believe the team I was part of in Mossel Bay from 2009 to 2012 (Oceans Research) broke the record for longest continuous track of a great white shark.

Tracking during the night is an absolute treat. Sure, it can be cold and moody, being sat on a boat at 4am with the rain coming down and you’re tracking a shark which is being particularly stealthy. But sharing in it’s hourly routines, seeing the bioluminescence of seals and dolphins as they swim by the boat, it’s not a feeling or experience I’ve had any luck in since replicating.

Because nothing says ‘growing up’ quiet like riding the inevitable decline in diversity and enrichment quality of life experiences. 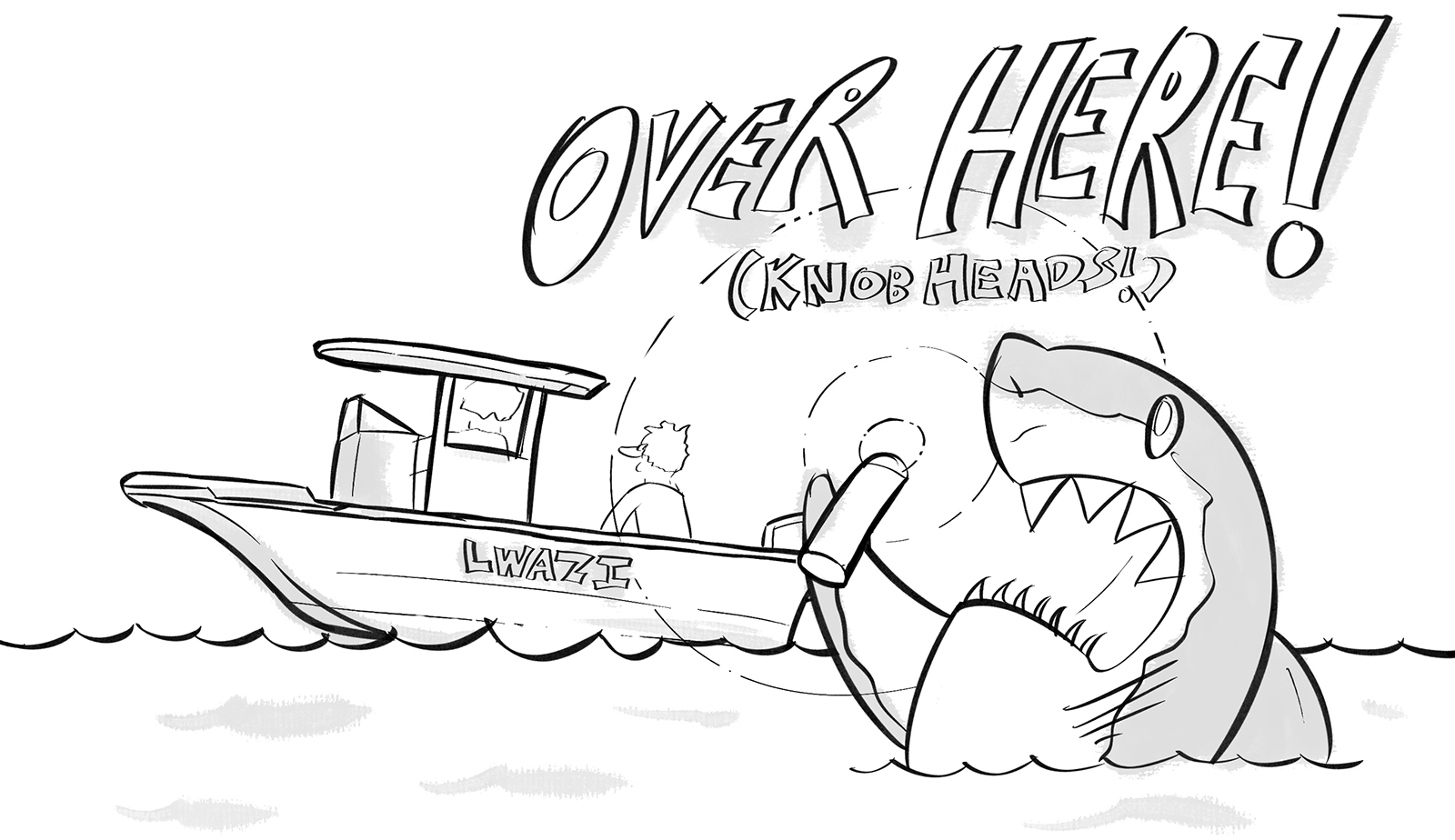 There’s plenty of reasons as to why someone would want to do this. It’s cool as fudge is chief among these reasons. More importantly however, is that it teaches us more about how great white sharks use their environment.

By tracking multiple sharks at different times of the year (tracking some when they returned to the area in the following years) we can start to build up a sense of general habitat use and variations. That information can likewise be looked at when studying the behaviour of other species in the area. One such example would be Michelle (Wcisel Jewell)’s Masters’: The effects of white shark presence on the behaviour of Cape fur seals at Geyser Rock, Gansbaai, South Africa. 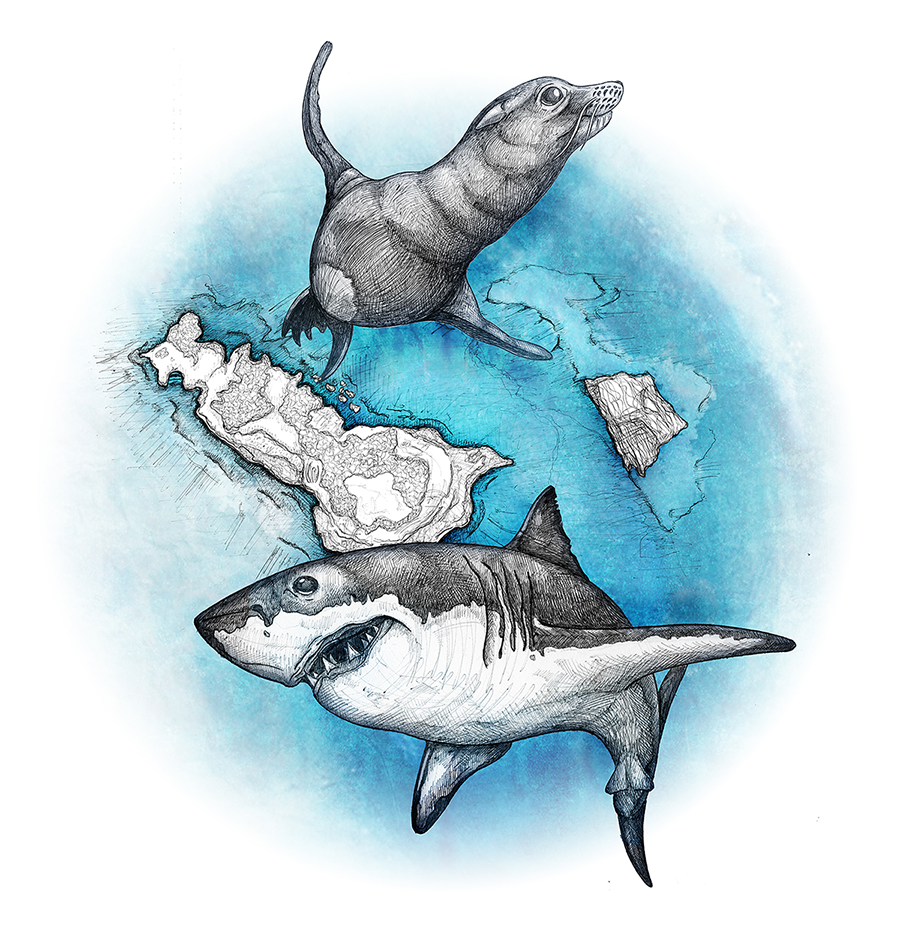 At this point, I find I’m doing a far worse job of explaining what tracking is all about than I did with the video that triggered this journal entry, made some ten years ago. The video itself was a group effort by the team at Marine Dynamics and the Dyer Island Conservation Trust. Our primary goal was to encapsulate why all this stuff is important as succinctly as possible.

The timing was also quite opportune. Much of the trust’s research was sponsored by Volkswagen South Africa, members of whom were visiting Gansbaai to learn first-hand about what they were supporting. This gave us the impetus to put a bit more effort into the production value. Oli  (Oliver Jewell), with the help of some damn fine (as if there’s any other sort) South African red wine supplied narration to my script, while GJ Worthington produced an original score: 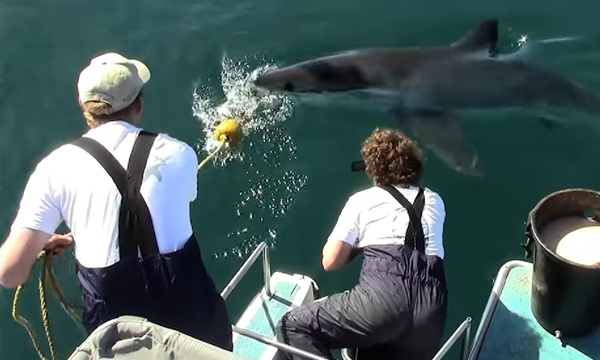 The theoretical and practical elements of white shark tracking were key in helping the Marine Dynamics team establish its Academy in Gansbaai. Oli had done considerable work in setting up the tracking program years before, much of which now continues to be led by Senior White Shark Biologist Alison Towner. In my view, the fundamental principles of tagging and tracking are critical to the continued improvement of our own understanding of the associated wildlife. The principles are also scalable, with tagging programs for smaller sharks being no less valuable.

For some context; Oli, Michelle and myself all got our first experiences of tracking great white sharks around the same time. Oli and I were among the first interns for Oceans Research (then named The South African Marine Predator Lab) back in 2008, albeit a few weeks apart from each other. Enrico Gennari, Steph Swanson and Ryan Johnson had established the internship on the basis of helping students gain more experience with the practical elements of marine wildlife research. The three of us all moved to the country within the same month and would eventually find ourselves in Gansbaai some years later.

Oli has continued his tagging and tracking work across the globe in both the USA and Australia. It’s not been limited to great white sharks either. As covered in my journal some years back, a camera tag attached to a flat back sea turtle which then met a (potentially) hungry tiger shark, revealed some interesting results.

I joined him and others on research expeditions funded by The Monterey Bay Aquarium in 2014 and 2017. These were particularly exciting because the tags themselves also included cameras, meaning we got to review everything the sharks saw when the tags were retrieved.

I wrote about this a little more extensively in my ‘Great White Sharks Hunting In Kelp‘ journal entry from back in 2019. In the meantime, here’s another video on the subject. I didn’t make this one. That likely comes as no surprise: 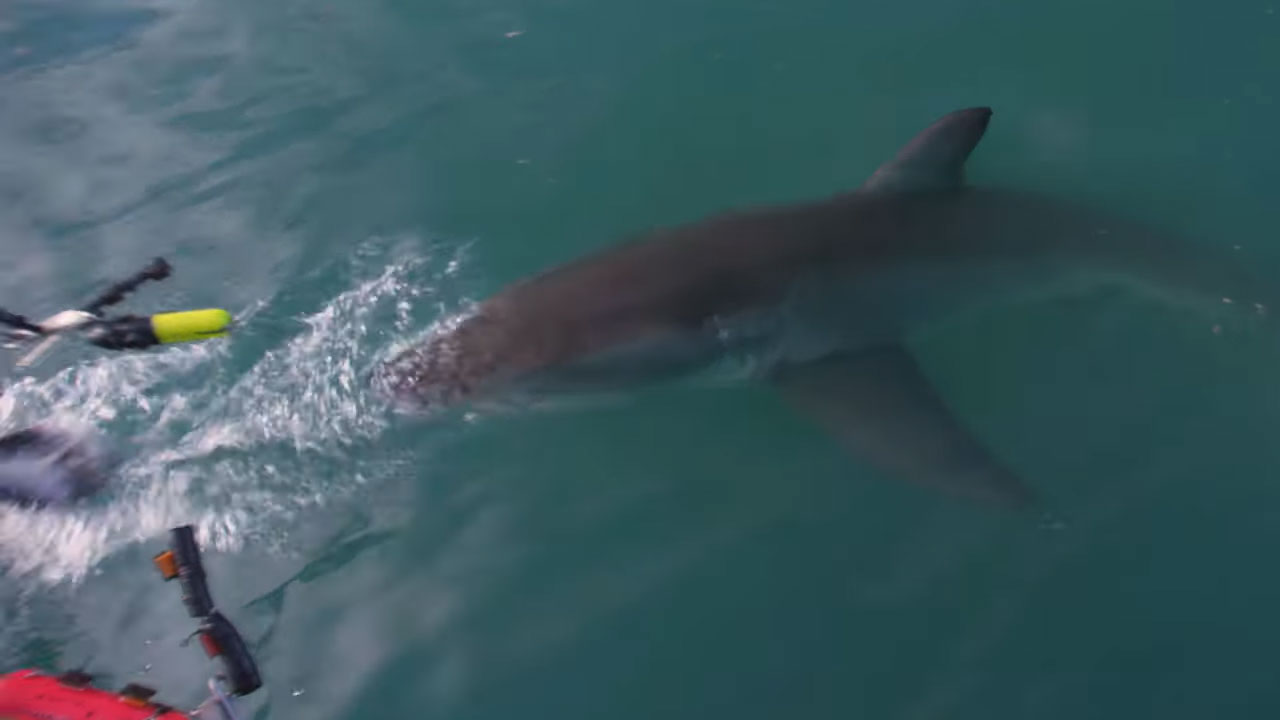 Obviously this is all very interesting to shark nerds such as myself, but I’m sure the majority would prefer to just see some pictures of sharks. Who wouldn’t, in fairness? They’re fudging great.

Here’s a few photographs taken during the twelve months we were all in Gansbaai, tracking great white sharks on a fairly regular basis. I might’ve snuck in a couple more recent ones just because they’re badass. All taken by my other half, Anna Phillips, but for the top down shot of Oli attaching the tag to a white shark passing by. That was expertly timed by one of our interns: 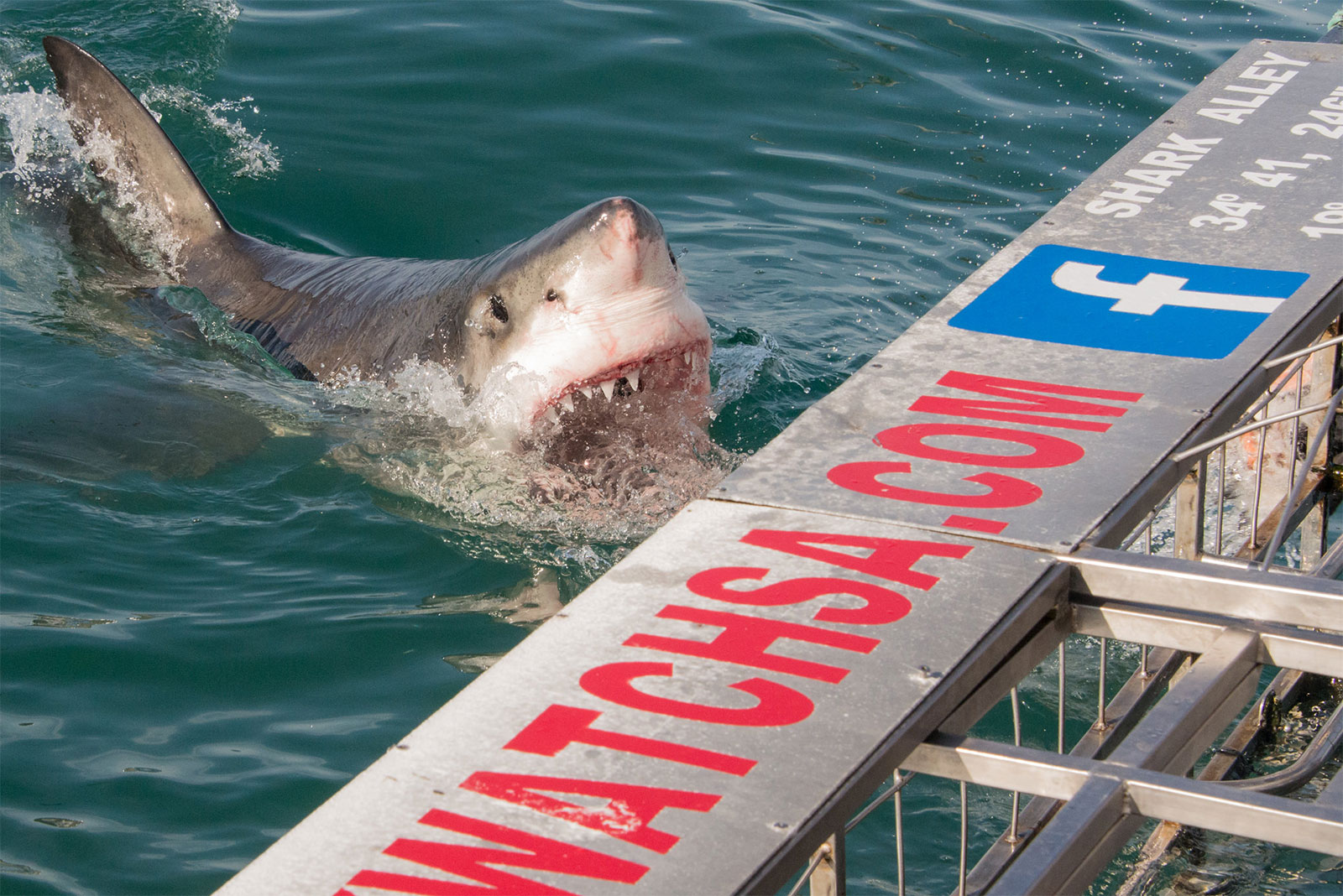 I think about sharks and shark-related projects on a daily basis, but I only write about them maybe two or three times per year. As such, my journal and portfolio probably isn’t the best place to go to for the most recent, indepth sharky news. I would therefore like to suggest that if you do want to learn more about great white shark tracking and sharks in general, you visit the following folks who are all mentioned or were involved with the above:

And here’s some more sharky projects or journal posts from my site: