It’s been a while since I spoke about great white sharks on this website. Just over two months, in fact.

My Meet The Sharks feature has suffered especially.

It’s not that I don’t have plenty of incredibly fond memories and stories about specific white sharks. Roxanne, Betty, Pasella and Slashfin especially, all spring to mind.

The problem is that by the time I’ve gotten my head back into writing mode and started looking for pictures, I’m reminded that it’s unlikely I’ll see any of these fish ever again.

That might sound ridiculous and make no mistake, I consider myself quite privileged that as far as personal problems go – not seeing one of a few very specific great white sharks again isn’t that big a deal.

But it’s been ten years since being immersed in that whole ecosystem on a daily basis. Even if we didn’t see one of our favourites or regulars, there was always the feeling that we could, that we might. The more time that passes, the more that feeling slips away.

And let’s be honest, it seems like the South African Government is hell bent on letting most of its shark species slip into extinction anyway. Please do check the Shark Free Chips website if you’d like an update on that depressing situation.

But enough misery! Sharks are fudging great and while I’m no closer to sharing any stories of my own, there is one particular fish who has been making a few headlines of late. 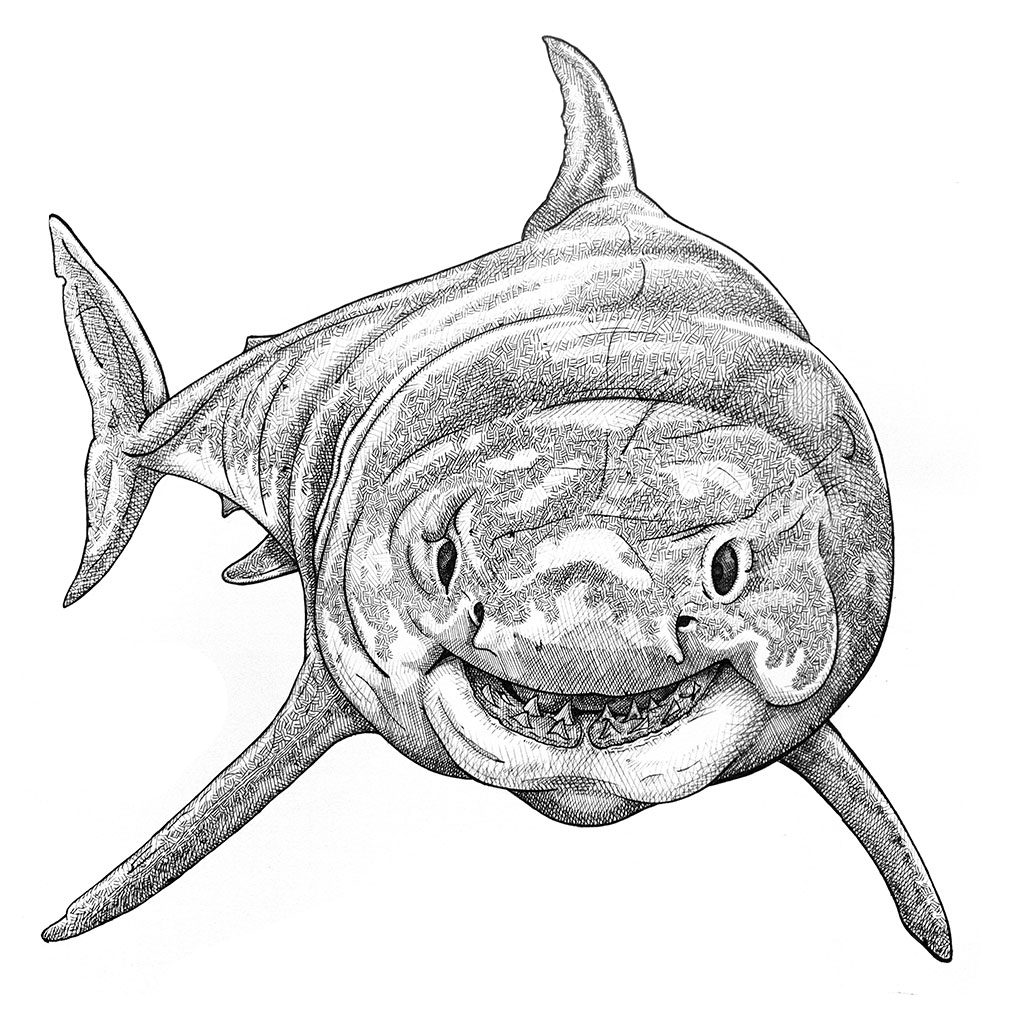 This is a non-related illustration I did of a great white shark which I’ve included purely due to self indulgence.

During last weekend, my long suffering mother called on the phone. That is she used the phone to speak to me, not that her name is ‘On the phone’.

Within the dense tapestry of provocative topics discussed (ie: the weather) was mention of a great white shark ‘heading to the UK’.

A quick Google search reveiled that this to be correct – a great white shark named Nukumi was indeed shown to be crossing the Atlantic.

She was tagged by the OCEARCH team back in October 2020 in Lunenburg, Nova Scotia. Weighing approximately 3.75 ton and stretching to a little over 17 ft in length (5.1m), she has been transmitting data consistently now for around six months.

Following the East Coast of the USA, she made her way south until reaching North Carolina before heading into deeper waters.

On March 8 2021 she made a distinct change in direction, making her way deep into the North Atlantic ocean.

Which sounds all well and good in principle, but it’s ever more impressive when you actually see how that looks on a map. 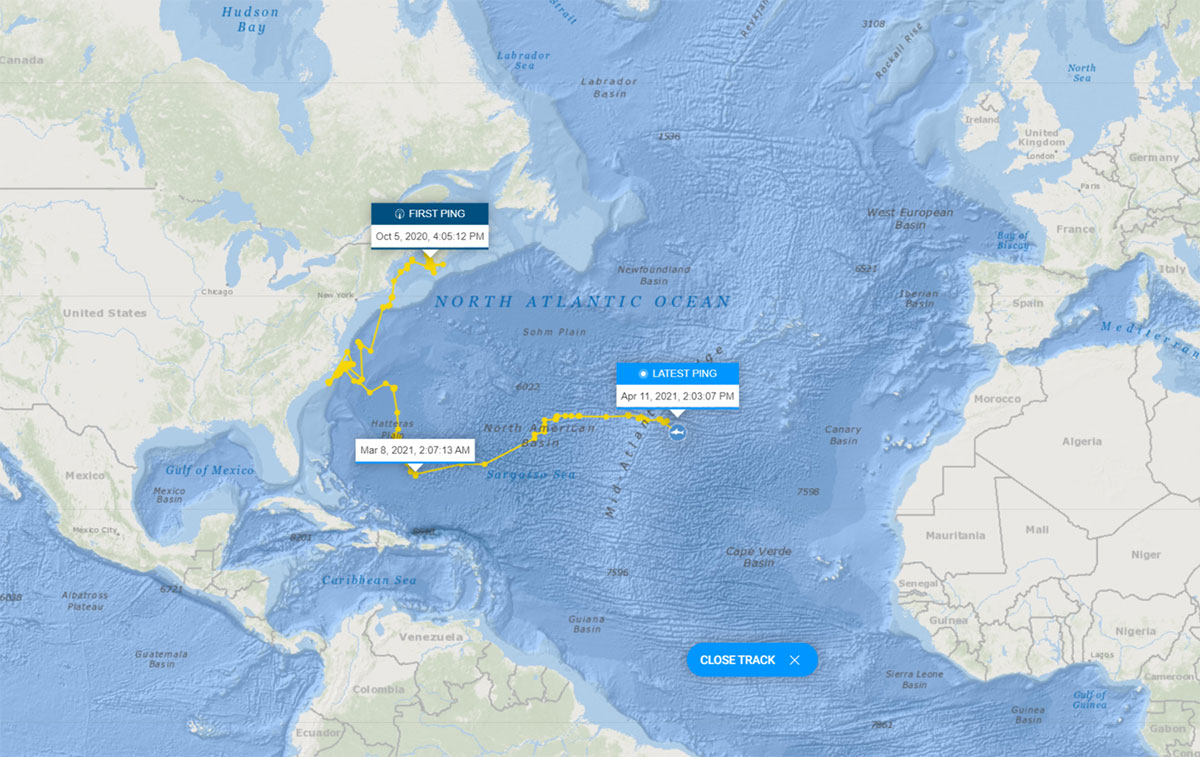 Do I think Nukumi will make an appearance in UK waters? No.

First off, this isn’t the first time one of OCEARCH’s great white sharks has made these sorts of movements.

Over a four year period after being first tagged in 2013, Lydia made very similar movements. She ultimately followed a straight line pretty much dead centre in the North Atlantic, before doubling back on herself once reaching the Charlie-Gibbs Fracture Zone. 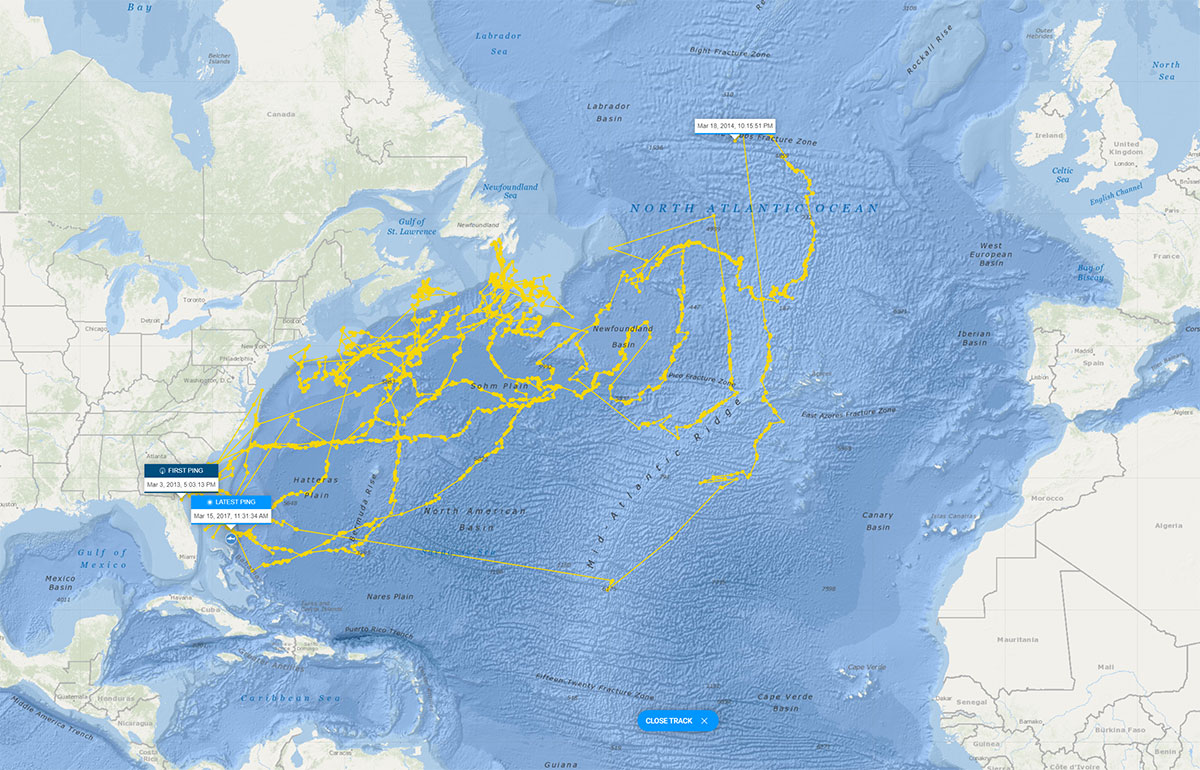 To be fair, Nukumi is larger and heavier than Lydia and there is some speculation that she might be pregnant.

If so, she could have very different motivations for making this journey. We do have a good healthcare system, for example.

But I don’t know how much of this is informed my scientific fact as opposed to a need for clicks. ‘Pregnant great white sharks’ and ‘great white sharks in the UK’ are far more likely to engage general users than ‘big fish goes for a swim’, afterall.

Secondarily, to my knowledge great whites tend to prefer warm waters such as the Med’, South Africa and obviously the USA.

Our seas can heat up to around 20 degrees during the summer and we’ve a few seal colonies that make for bargain bin alternatives to the original great white shark McDonalds Drive Thru.

So while these things mean it isn’t statistically impossible, when viewed in context of white shark movements across the globe I think we are just too far out of the way. 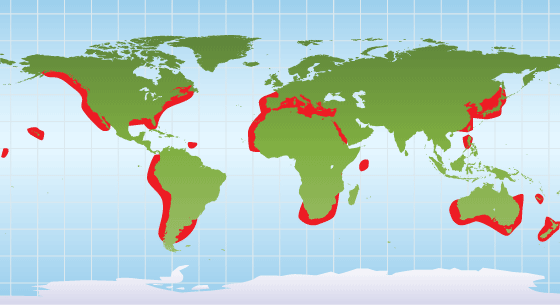 But stranger things have happened. Anna cut my hair on Sunday evening and I still have both my ears.

So yeah, while it’s possible I don’t think it’s likely. But I do look forward to the influx of articles confusing porbeagles for being Nukumi when summer eventually hits.

Ed you are so cool – what more stuff can you tell us about sharks which like you, are also cool?

For one you can follow SharkStuff on Facebook. We are a small charity focused on education, research and conservation of UK shark species. The pandemic has buggered some of our operations up over the last twelve months but fingers crossed we’ll be hosting some workshops later this year.

You can get updates on various shark movements directly from the OCEARCH Shark Tracker.

And you can also bookmark Akulabyte – more on that in the coming weeks… if I ever manage to get my head around AI.