Here’s something new for you – I’ve done a project combining illustration and marine wildlife!

What’s that you say? “Ed, this isn’t new at all. All you do is waffle on about sharks and/or design in between massively delayed tour diaries from places we’ve never heard of”.

Well, you make a good point and I have no retort.

Beyond of course, a plea that you continue reading because the project in question is truly deserving of your time.

Which is something I rarely promise on this website. 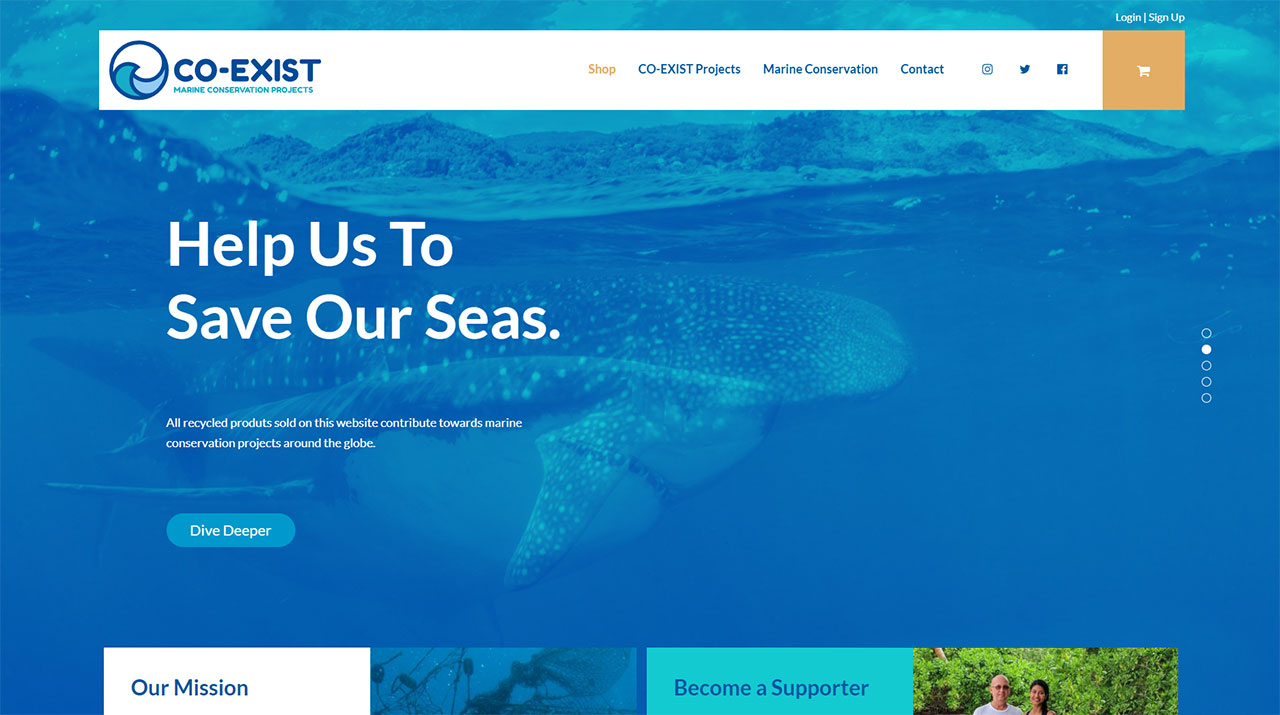 Co-Exist – Animals and stuff – check it out!

CO-EXIST – For the good of the ocean

CO-EXIST is a recently launched marine conservation initiative, lead by a team of passionate, experienced professionals. It supports a number of projects across the globe and produces its own range of custom designed, ethically sourced merchandise.

One of the goals of the initiative is to raise awareness of pollution in the world’s oceans. Promoting this message is a series of clothing products featuring artwork created by various artists.

Long time client and collaborator of mine Milestone Ecommerce Ltd, was brought on to develop their website and assist with marketing.

As Miles (Managing Director of Milestone) learned about me within about five seconds of our first conversation – I like sharks and drawing.

He therefore asked if I’d be game for doing some designs.

I responded with the energy you might expect from a Toddler being offered sweets.

That is to say – with no small amount of enthusiasm.

The original brief was to create some pretty marine wildlife illustrations. We’re talking very early in the development process of the whole initiative. Therefore, specifics about exactly what needed to be in those illustrations was still open to discussion, inviting creative input from the artists involved.

The only stipulation in my case, was that I use the three shades of blue established in the initiative’s branding. Beyond that, artistic style and tone were to be developed as we went.

I’ll write up a more detailed case study at some point, but in short – a lot of rough drafts followed.

What those drafts led to was a basic fundamental concept – the relationship between sea animals and plastic. See, one of those things belongs in the ocean, the other does not. Yet, it’s the one that does not belong which grows in density day by day, while the other dwindles into nothing.

I explored this concept with two somewhat literal/on the nose approaches. The first we entitled ‘50/50′, where one half of the animal is made up entirely of plastic. We called the second  X-Ray  and here, the internal organs of animals are swapped for various pieces of plastic. 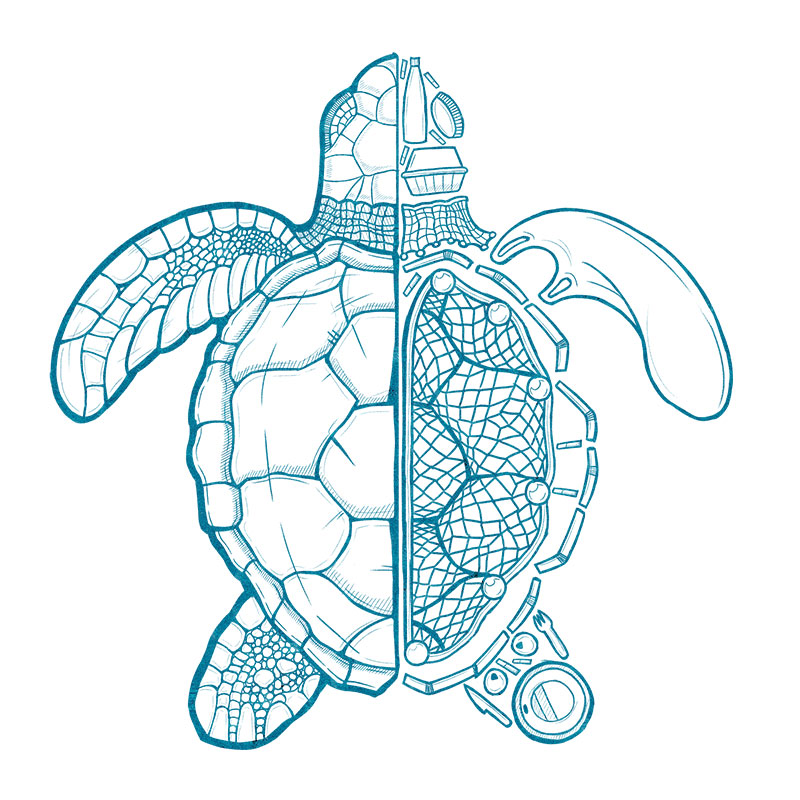 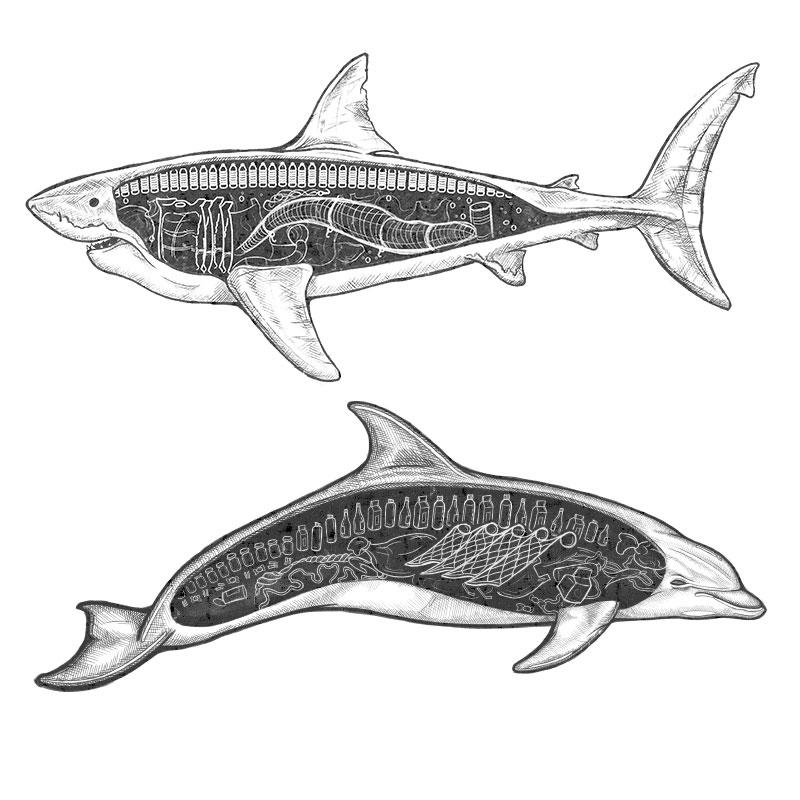 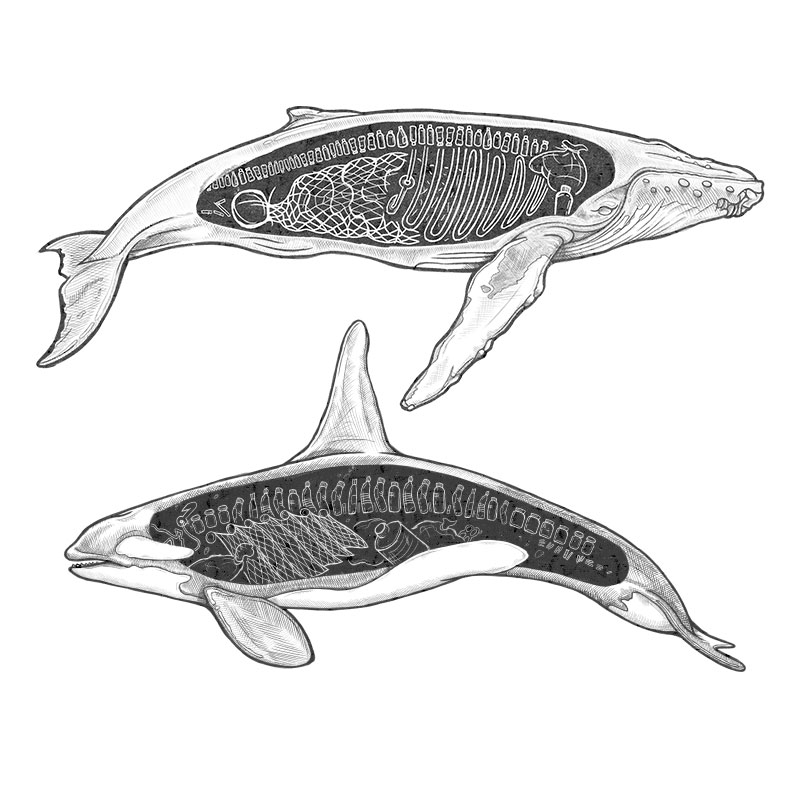 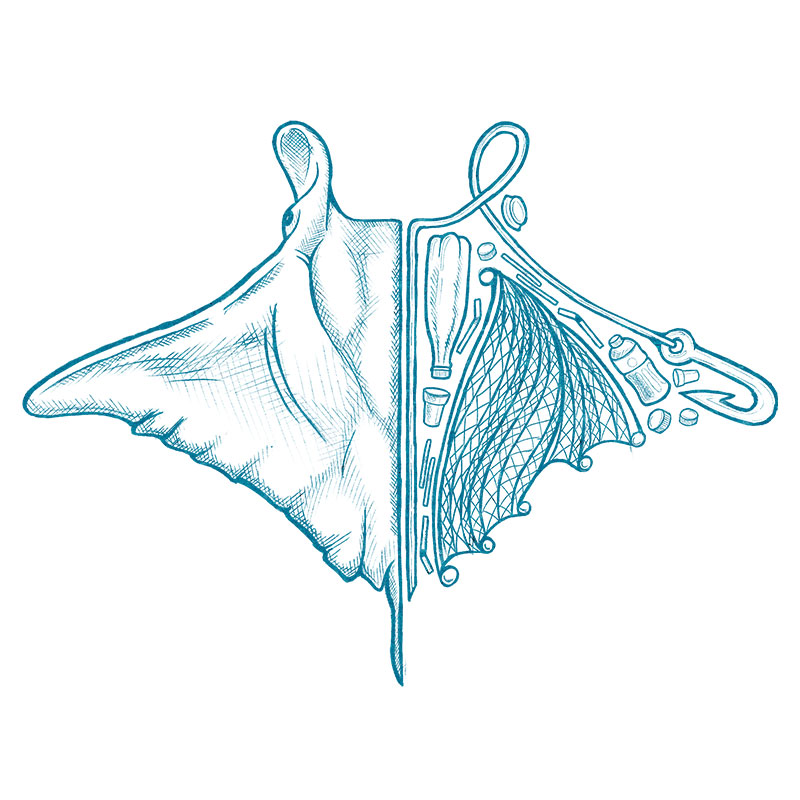 A different story when you look twice

The driving force is the same in each – I wanted to create something where upon first glance, all you see is an animal.

Upon closer inspection however, you come to realise that’s really not the case. What should be body parts and internal organs are infact the very items we drink from, bring our shopping home in, or attempt auto erotism asphyxiation with… so I’m told.

This seemed a creative, interesting exploration of the initiative’s central themes. I felt the idea of people needing to look twice to see and recognise the reality of what’s in front of them could be considered a fitting encapsulation of the larger issue. I very clearly remember art college impressing upon me how much more important the ‘meaning’ is than the execution. Meaning is important, apparently.

But what’s more important is the fact that they look pretty good on the clothing: 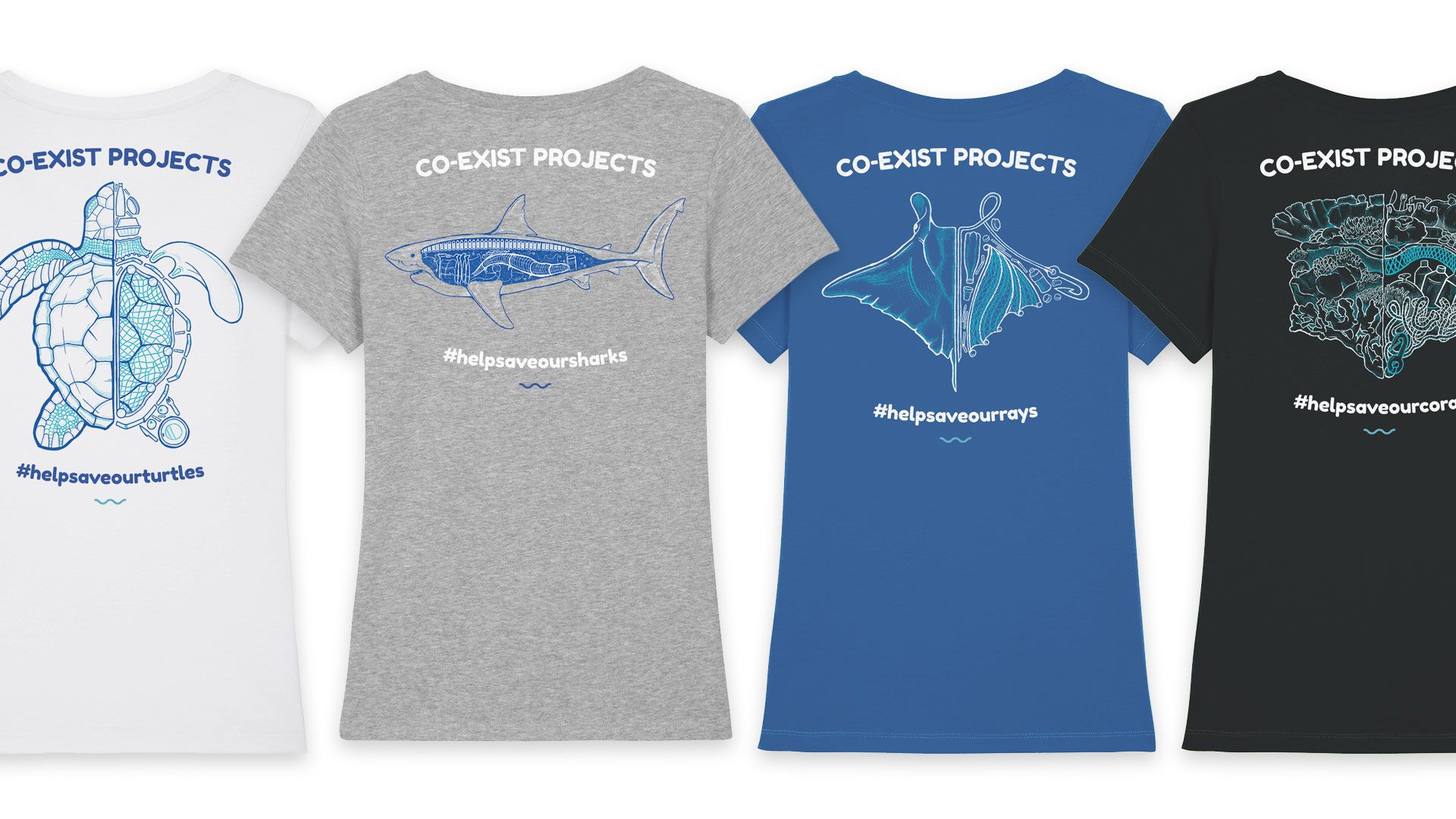 In the early stages of the project I shared the artwork I’d overseen for the film Of Shark and Man.

While I was responsible for the overall direction on that project, it was Anna’s sister Sue who handled its execution. 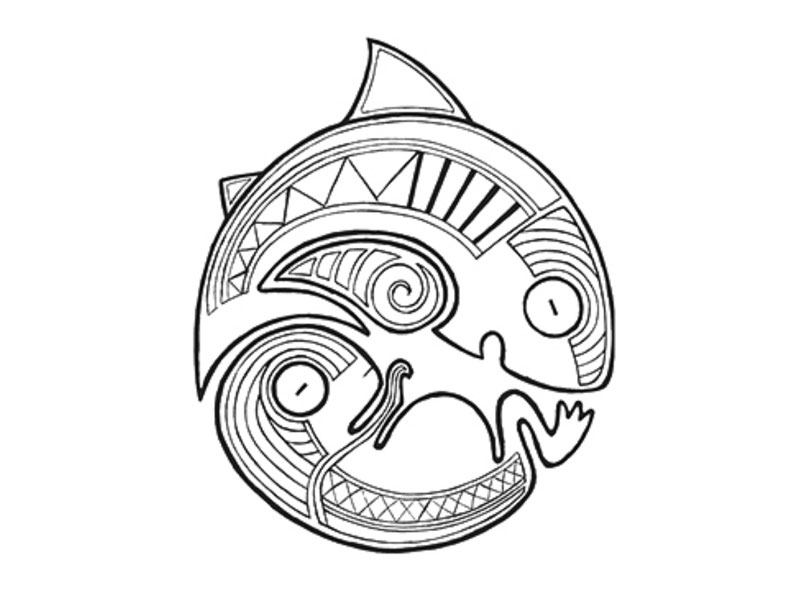 The CO-EXIST team dug her work on thatt and so asked if she’d produce a few more samples for the T-shirts in a similar style.

She said yes and so, the following products are also available: 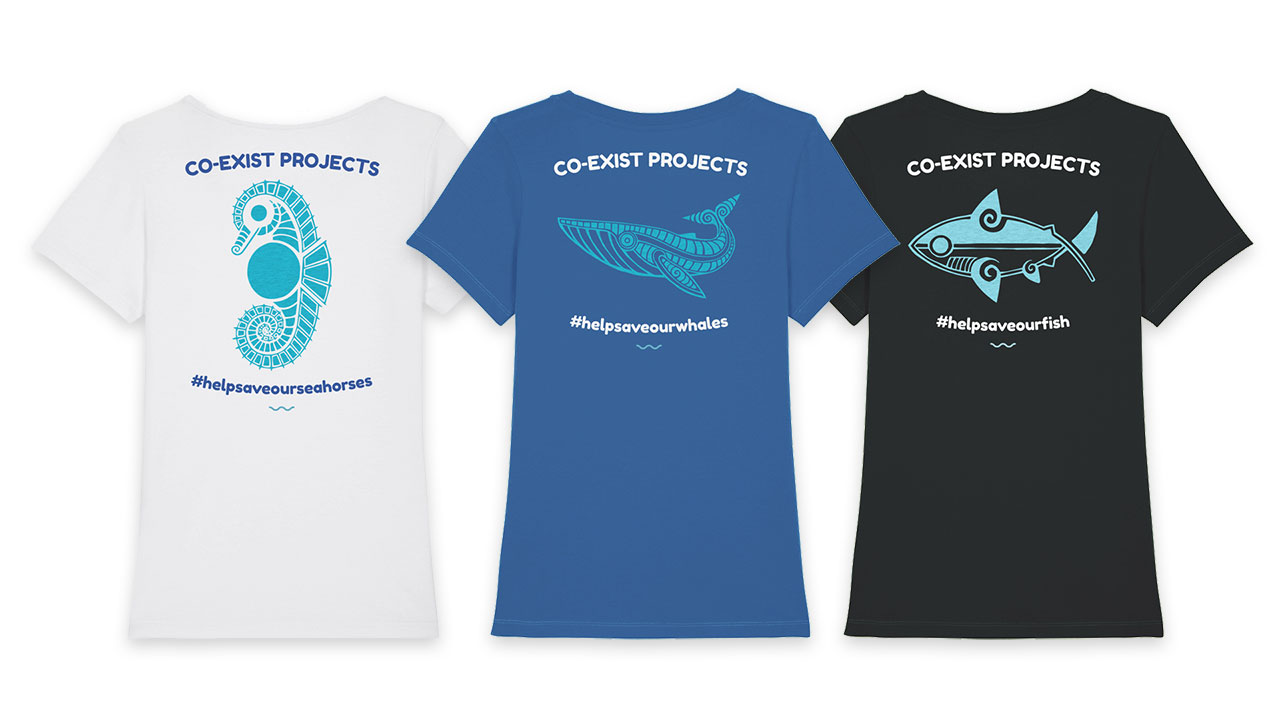 Hopefully, the website will grow in popularity and as a result, so too will the range of artists featured across the products in their store.

Thanks to Milestone Ecommerce for bringing me onto the project and please do take the time to check the website out for yourself.

Our aim is to develop an awareness and support for the Coexist Projects Foundation through the sale of ethically sourced and environmentally friendly products.

CO-EXIST Projects
Back To Top