Like me with cake, Tiger sharks eat everything. It’s a fact that we all accept.

Nevertheless, they do have their favourite delicacy, which just so happens to be sea turtles. I don’t know how legitimate a fact that is, but what good are facts if they can’t be mis-quoted to serve a narrative? This is 2020, afterall.

Infact, the teeth of a tiger shark (which are considerably shorter and broader than that of the great white, whose are better suited to chunky flesh) are perfectly designed for devastating hard surfaces. Hard surfaces like turtle shells, or that of my cold, masculine persona.

You’d therefore be forgiven for thinking that the result of every fight between the animals, would be a resounding win for team Tiger Shark.

A new paper by Jenna Hounslow, Oliver Jewell, some other cool folk and me, should have you thinking twice about that.

I know, right? Life will never be the same again.

A research team based at the Harry Butler Institute of Murdoch University (Western Australia) have been putting camera tags on flatback sea turtles. If your immediate response to this is “Why?” then you’re seriously on the wrong website. If on the other hand, it’s more of a “That’s cool… but why?” let me tell you – the reason is to better understand the species behaviour and lives on their main feeding grounds.

To my knowledge, they’re not a terribly well known or understood species. I’m as guilty as anyone for focusing my attention on the ‘sexier’ animals, but as far as research is concerned, understanding species like these are no less vital to our better overall understanding of the ocean environment.

Jenna Hounslow has been leading the project, with long-time colleague Oliver Jewell aiding through his extensive experience in tracking. 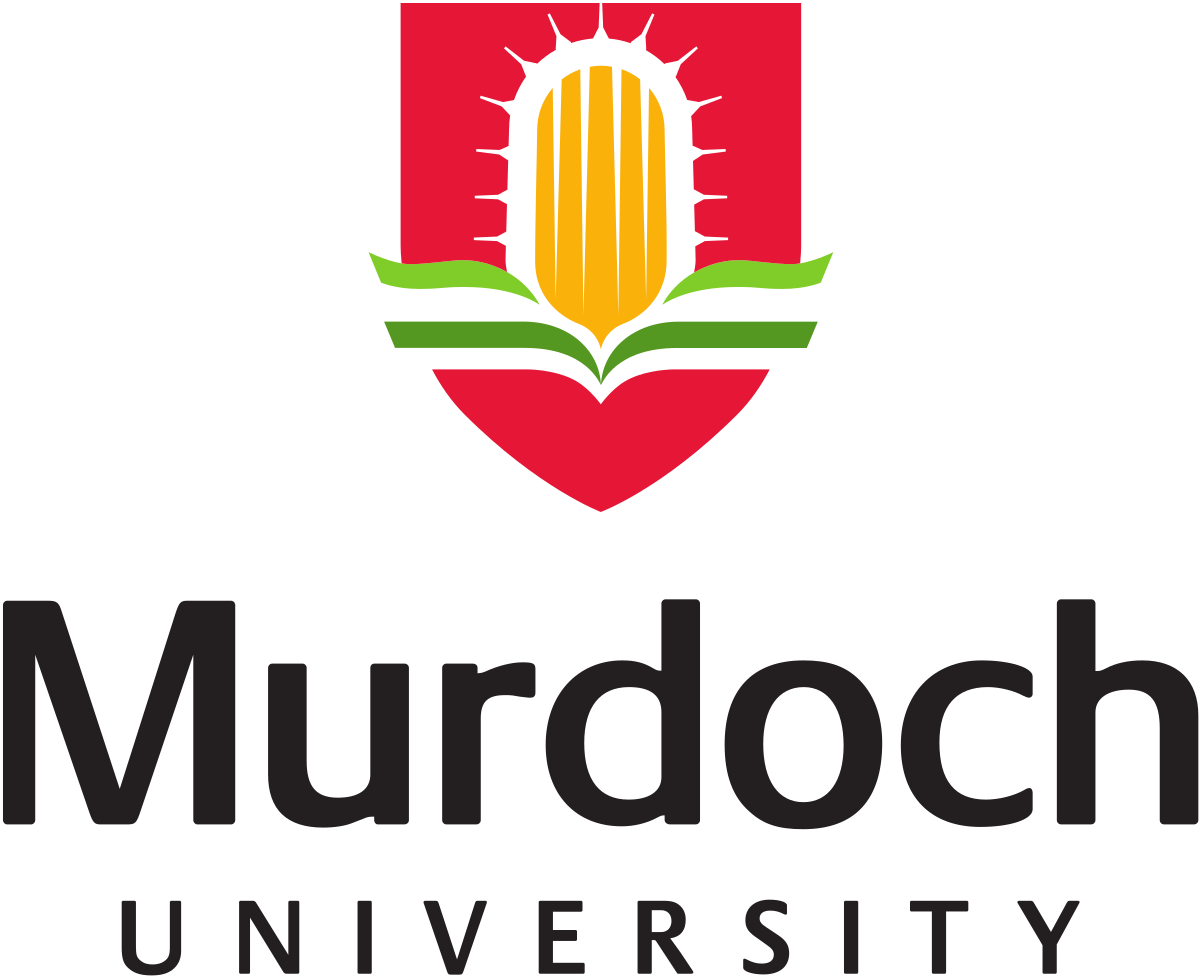 During one particular expedition in 2019, the tagged turtle was approach by a tiger shark. Nothing surprising there since as mentioned, tiger sharks like to eat turtles.

What’s surprising is just how little of a shit the turtle gives toward the shark’s appetite. They don’t just evade the predator, they literally lunge with an attack of their own in footage which is the first of its kind in the world.

Animal‐borne video from a sea turtle reveals novel anti‐predator behaviors was recently published in The Scientific Naturalist and documents the entire event. Included is the actual video footage, which is available for viewing and I strongly advise watching the whole thing, because it’s great.

Camera tags of this sort are a relatively recent technical innovation. As such, they’re helping scientists learn more about anti-predator techniques and in doing so, correcting some previously-heald views. Flatback sea turtles demonstrating aggression towards a predator hasn’t been documented before and thus, has often been overlooked as an avoidance strategy.

Now it’s rather late, I’m tired and Manchester United have barely squeezed a win against a team yet to win a single game this season. I am therefore at risk of failing to do the study justice by waffling on indefinitely, so let me advise that more detail on the story is available on both the official Murdoch website and Scimex, if you’d like to read quotes from some of the authors and see more pretty pictures.

I’m proud to be a co-author on the study, having assisted with the analysis. This is my third peer-reviewed publication to date and having begun my masters this year, my intention is for it to become one of many. My intention was also to have obtain some string of inner peace by thirty six so let’s see how that works out.

Marine science is not exactly where I thought a degree in Multimedia Design would take me, but it certainly beats stacking shelves. Just consider it proof that when someone tells you “You can’t do that, that’s not the way to do things”, the confidence in their words won’t necessarily be matched by their wisdom on the topic.

Back to the project – as you might expect I also produced some artwork. Jenna liked the 3D artwork I had done for Oliver’s study on sharks hunting in kelp and gave me a considerable amout of freedom in how I approached visualising hers.

Digital chalk and charcoal have very much been my visual preference for illustrations this year and this was no exception. I wanted to create something that had a sense of dramatic tension and really captured how mis-matched a fight this is.

Which is why the turtle’s victory is all the more impressive. 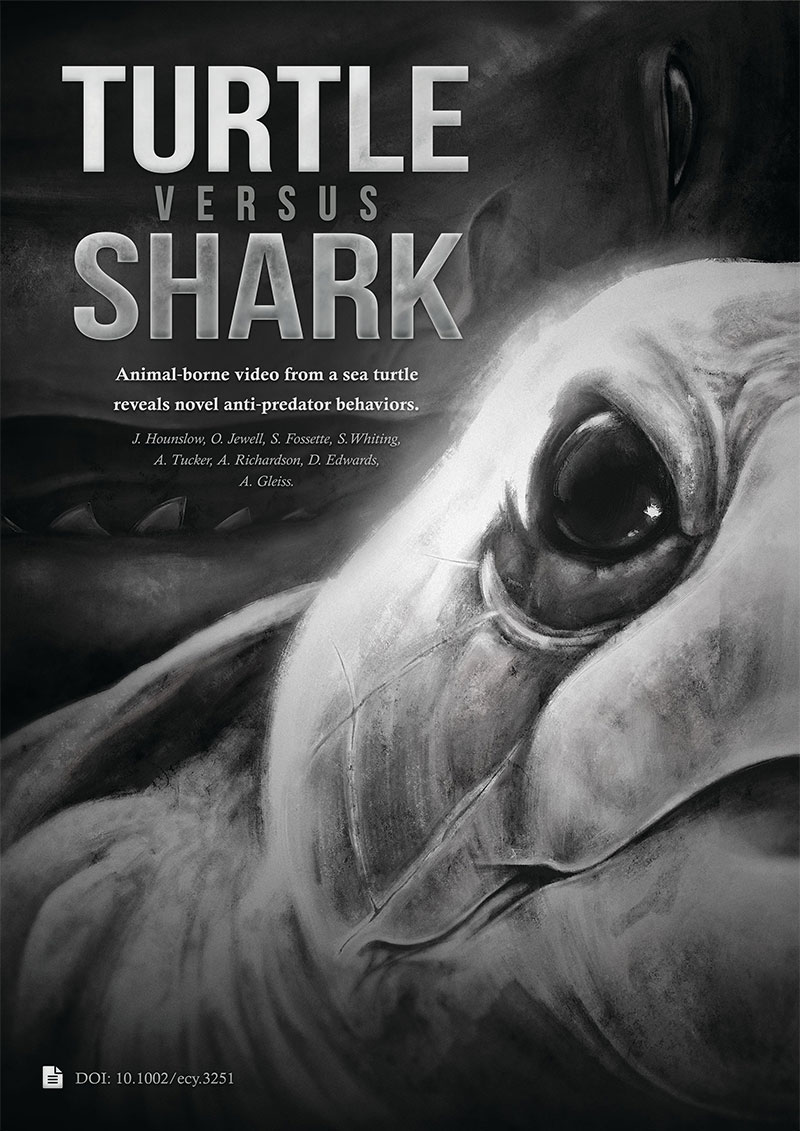 It wouldn’t be like me to create an illustration without spending some amount of time talking in unnecessary detail about how I created it.

If you like what you see, please do visit Turtle vs Shark for more screenshots like the following, showcasing some of the really fine details and development of the illustration. 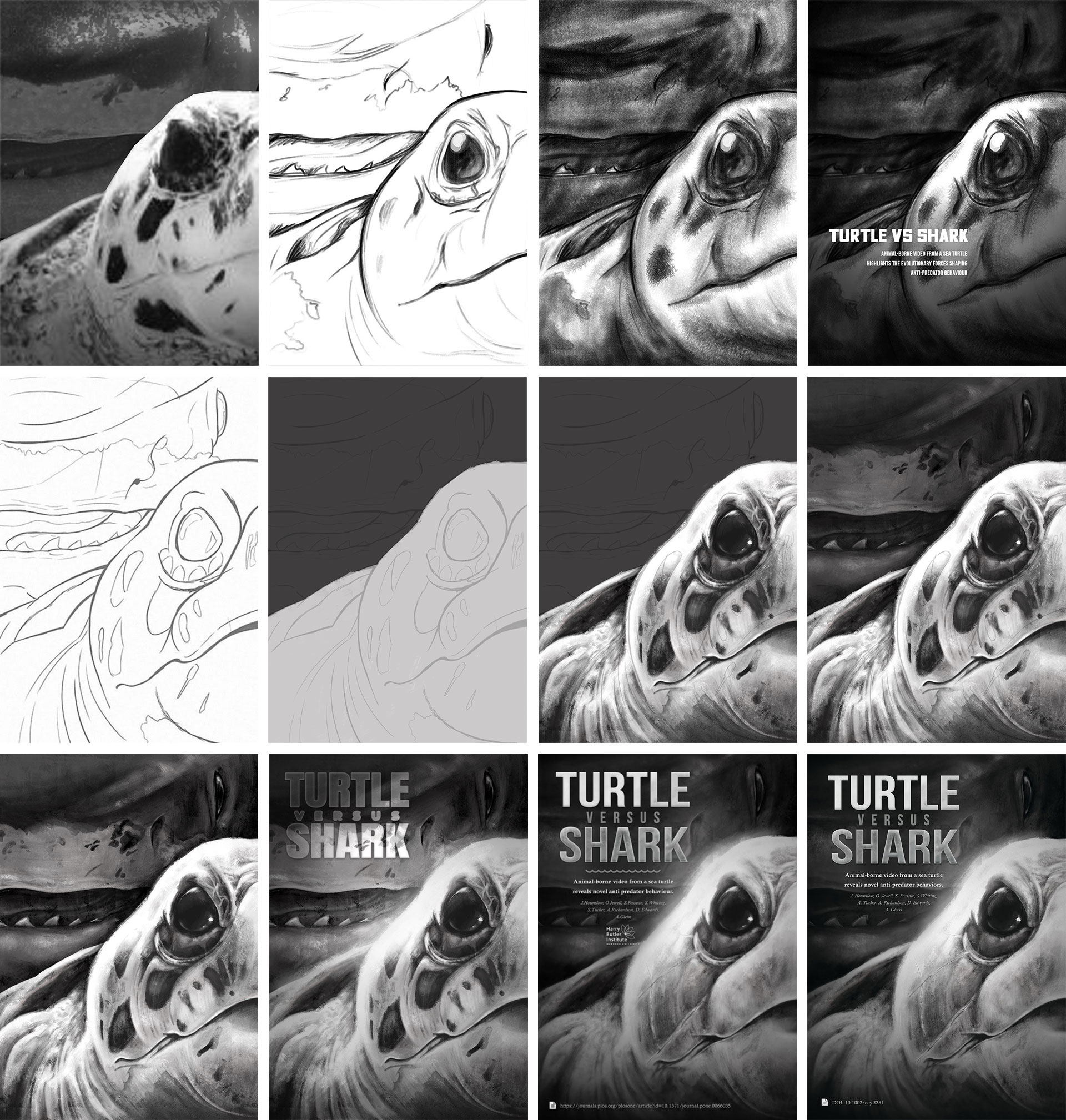 Development of the promotional artwork for this project

Thank you yet again to Jenna, Oli, Adrian and everyone else involved with the project. Primarily for furthering our understanding of such badass wildlife, but also for keeping me busy.