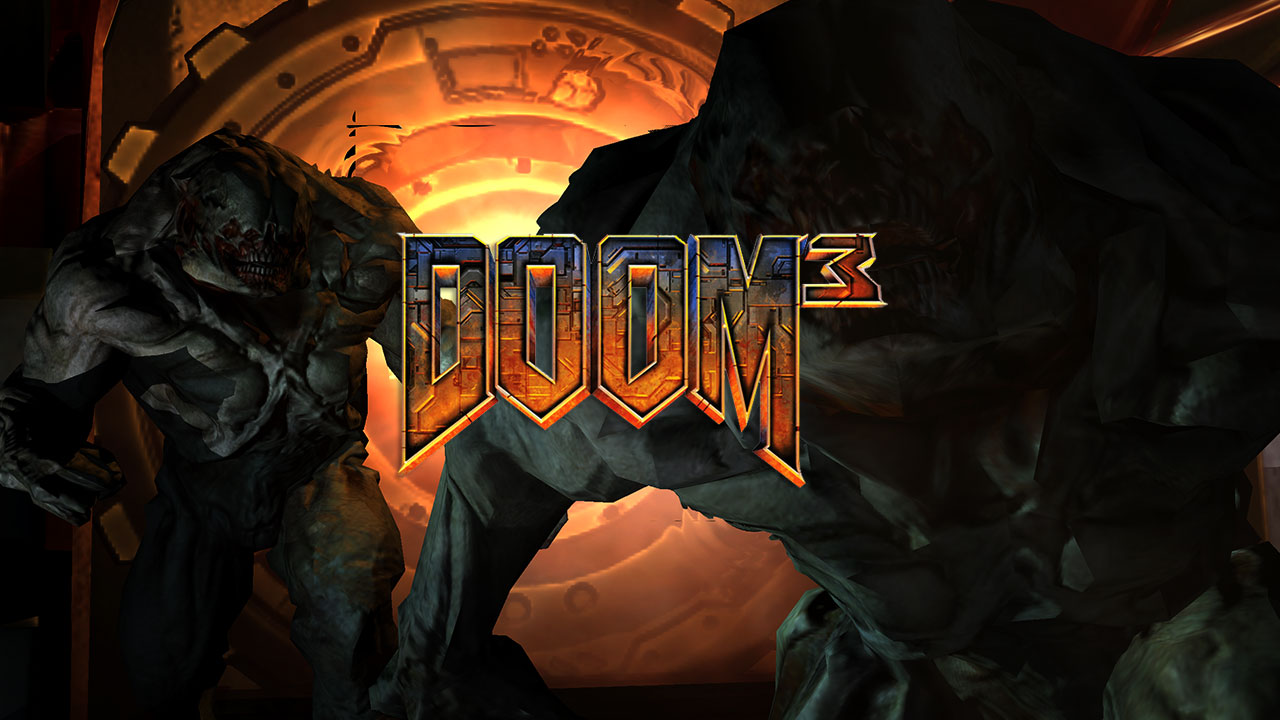 More intimidating than the Cyberdemon's introduction in Doom 2016

Knights to see you! A great demonstration of real-time lighting and composition

This sequence unfolds in the latter stages of the game. At this point, most of the enemies you’ve fought have been of an equivalent size to you, except for The Vagary.

Though a greater challenge than the average foe, The Vagary was more of a nimble, mobile opponent. When the Hell Knights arrive, they are the first adversary to tower over you with a physically intimidating presence. They represent a whole new level of threat. Brown-sludgey-pant-inducing threat.

As far as gameplay is concerned, their mere appearance offers a fresh challenge. But the incorporation of this brief cinematic sequence gives their arrival a greater sense of relevance to Doom 3’s narrative. At the same time, it intensifies the threat they pose with the use of some very simple but smart cinematography.

It brings value to the gameplay and the story – as any good cutscene should.

The Vagary enjoyed its own great cinematic introduction, but represents an entirely different sort of threat to the player.

To my knowledge, id Tech 4 was the first game engine to use completely dynamic lighting. No pre-baked lightmaps or alternative rendering pipelines for animated and static meshes. All lights and shadows are unified, giving every scene a rich, immersive look.

The room this cinematic takes place in has two distinct areas of lighting. To the right of the entrance you have a reasonably large, open area with a consistent dispersal of light across it. This is where most of the combat takes place, so room to navigate and clarity in what you’re fighting is important.

To the left, the portal through which the Hell Knights enter is shrouded in darkness. There’s a very distinct channel of black between the two areas. This supports the cinematic in a very specific way, explained later on.

When the portal does open, the eruption of colour serves two functions.

First, it provides a centralised focal point. Second, an intense, dramatic back light for the oncoming monster.

The warm oranges and reds work in tandem with the aggressive motion and framing of the creature. It only walks through the light briefly before being in dangerous proximity and cloaked in shadow again. It makes you aware of the strength and threat this prick poses, while maintaining some degree of mystery.

The next shot builds on the lighting with some smart camera work.

Tilting the perspective upwards from a low elevation, drives home the sheer size of the Hell Knight as it dominates the focal point of the frame.

The use of the human character is pivotal in making this effective, not just in terms of allowing the enemy to demonstrate its strength. First person games don’t communicate scale as well as those in third person. You can’t see yourself, so it’s difficult to get an accurate sense of how large something is in comparison to you. Putting a human character of comparable size in the foreground solves this problem.

Furthermore, when the sequence begins we see our character and the camera moves in to share their general point of view.

We already have some context for the framing of the shot, which further clarifies our physical relation to the Hell Knight and character between us.

All of this unfolds in that black channel I mentioned earlier. The foreground of both characters are engulfed in darkness, against the hot back light of the orange portal. We are almost completely dependent on the key light for understanding what’s going on. In this case, that key light is a pair of strobes at either side of the frame, which flicker roughly in alternation. Their cold tone and erratic nature creates a heightened sense of tension, unease and danger which complements the action as it unfolds.

Between the balanced use of light and careful framing of the central characters, cinematography is everything that makes this sequence work.

Step one in making your pants brown – be this guy.

What follows wraps everything up nicely. Mr ugly git slams our poor friend against a wall without breaking a sweat, proving once and for all that he/she means business. As if there was any doubt.

The next shot is the first which doesn’t centralise the frame around the Hell Knight. The intense, flickering strobe light maintains the intensity and our focus on the beast, while a second aggressor enters the frame in the adjacent space.

Two for the price of one!

The preceding moments were dedicated solely to communicating the sheer size and strength of this creature. Before we’ve even had chance to process this, we’re faced with not one, but two as they dominate our view.

The entire sequence lasts barely twenty six seconds. Less than half of that features the Hell Knights.

So in ten seconds, we’ve had a dramatic introduction to a pair of characters and the extent of the threat they present. While their behavior is obviously a massively important part of this, the lighting and composition of every shot is what makes it truly effective before gameplay resumes. 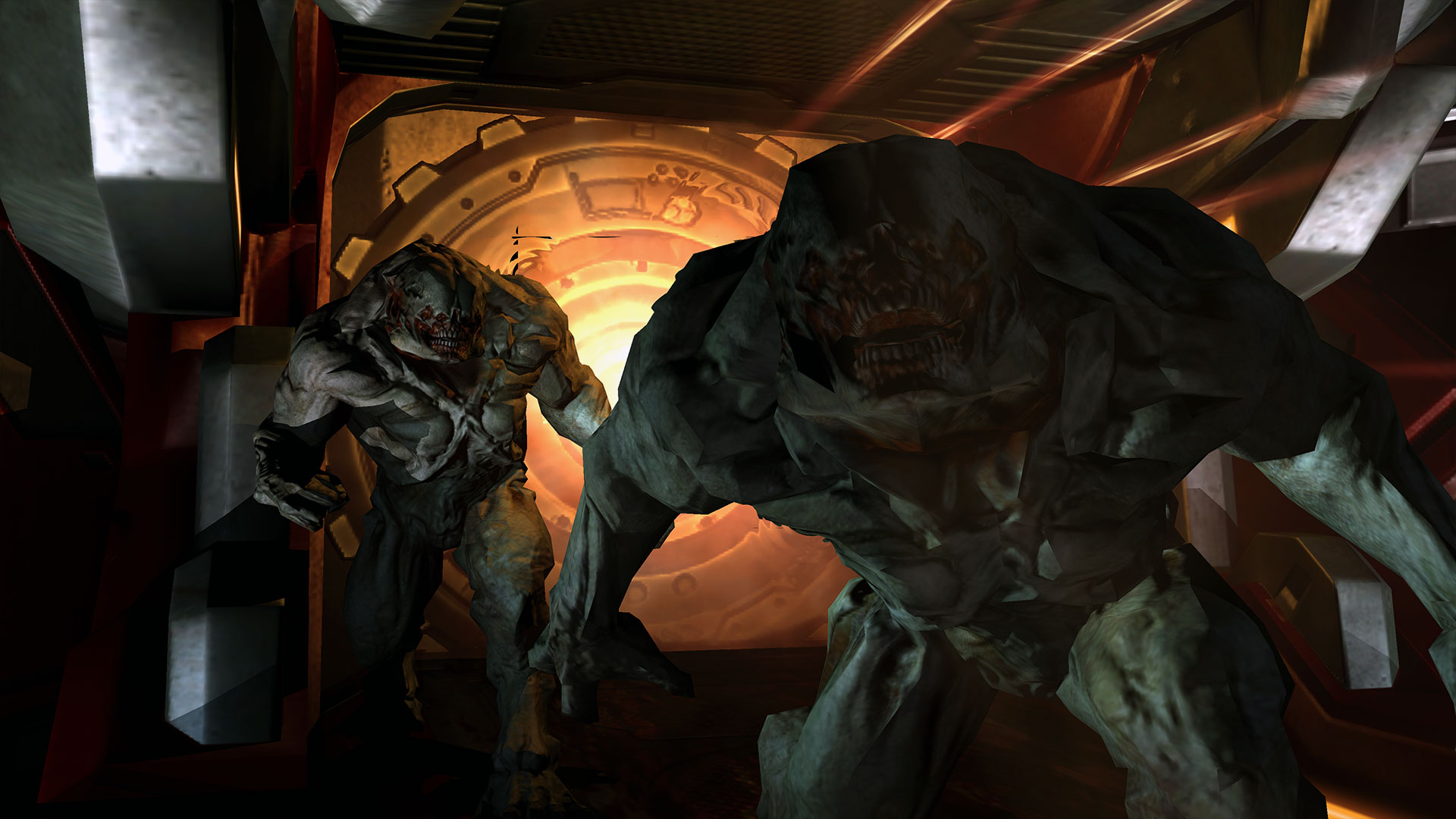 From Hell Baron to Hell Knight – An ode to the past

I can understand why some people felt the game was more preoccupied with feeling cinematic than building on many of the original’s gameplay tenants. Much as I enjoy Doom 3 and appreciate its dedication to the original’s horror tone, the gameplay suffered. There’s some awesome, memorable encounters, but the moment to moment action is fairly forgettable.

Nevertheless, Doom 3 is littered with good cutscenes, especially when it comes to introducing new enemies. In my view, the cinematics peak with the Hell Knight introduction which is lit, shot and timed perfectly.

It’s also a wonderful reimagining of the dual Baron reveal at the end of Knee Deep in the Dead, the first episode of the original Doom.

I remember that despite bricking my pants during this segment as a nine year told, I couldn’t help but imagine how it would look in a movie. Doom 3 took us a step closer to turning what was in our imaginations into a tangible, breathing reality.

This was back in 2004. In that year we got Doom 3, Half-Life 2, Vampire – The Masquerade: Bloodlines, The Chronicles of Riddick Escape from Butcher Bay and Far Cry. Graphics have come a long way since even then, but this era was when games really started knocking on the door of photorealism.

Anyway, that’s a digression I’ve not the time nor inclination to indulge just now.

Thanks for reading. Please do consider reading other posts I’ve written on the subject of cinematography in videogame cutscenes and then go play Doom 3.