Week three‘s results weren’t especially thrilling. A few other projects convereged and consumed most of my time, leaving very little to do a decent job.

As these projects are still ongoing and free time ever-elusive, I factored the limitations into week four’s reconstructions.

And I still managed to fall behind. You can’t ever accuse me of not being consistent.

To make up for it, I’ve contextualised week four’s reconstructions around game design. Surface materials, to be specific. I thought I’d have a go at shooting random surfaces and seeing how well they would work as materials, with as little faffing around as possible. I didn’t bother worrying about making the materials tile, because lazy.

In each case, a high poly object is exported from Reality Capture, its diffuse, normal and displacement then baked onto a flat surface in Maya. These were then imported into Unreal Engine 4 for preview.

In respect of photography, I’ve also utilised a very specific shooting approach to each subject. Mainly to mix things up, but also to see if there’s a certain technique which works best in these situations.

The process here was to shoot from a single trajectory at three proximities. The closer I got, the more photographs I took for coverage. Honestly, I reckon the same results could’ve been achieved with ten photographs, given how subtle the depth is.

I may have gotten better results with a rotational method, but again given the lack of depth I don’t think we’re talking a significant improvement. The normal map works quite nicely, but the displacement suffers from the carpet not being completely flat. 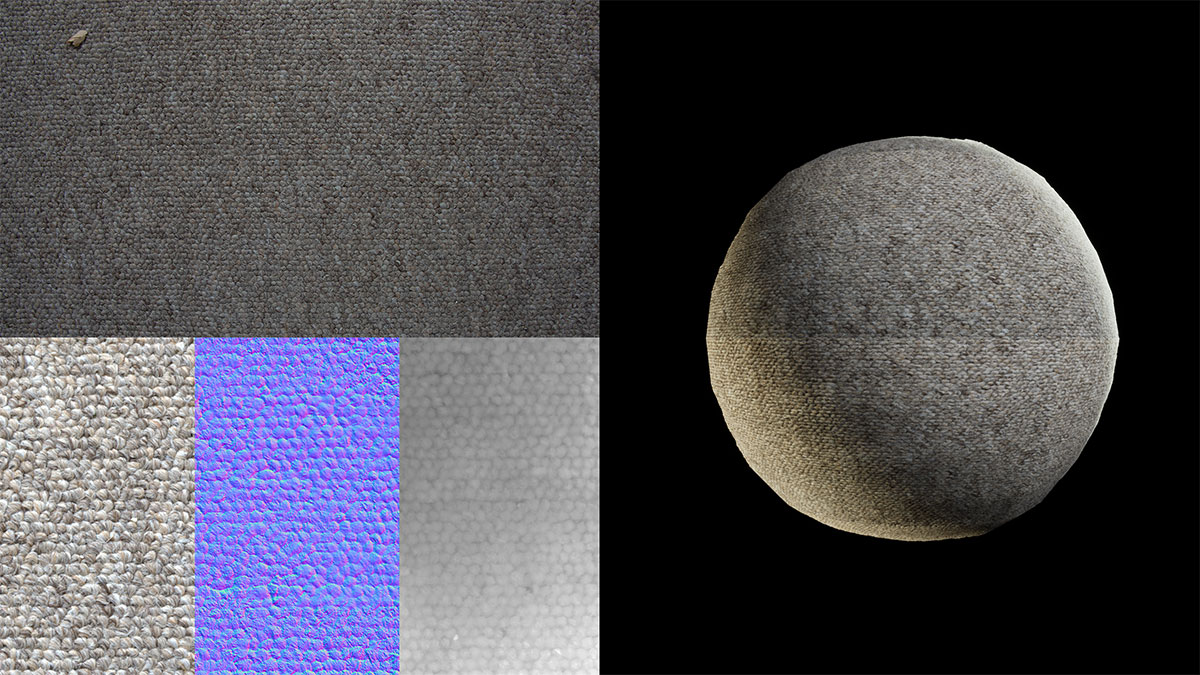 Smooth surfaces can always be tricky, but I felt there was enough variation in the colour of these tiles and depth from the grouting, that they wouldn’t be too troublesome. In contrast to the previous reconstruction, I shot from various angles. As a result, I managed to capture a lot of super fine surface variation that I couldn’t even see when photographing. However, to really see these on the material I have to intensify the normal map to such a point that the result is no longer consistent with the real world surface. 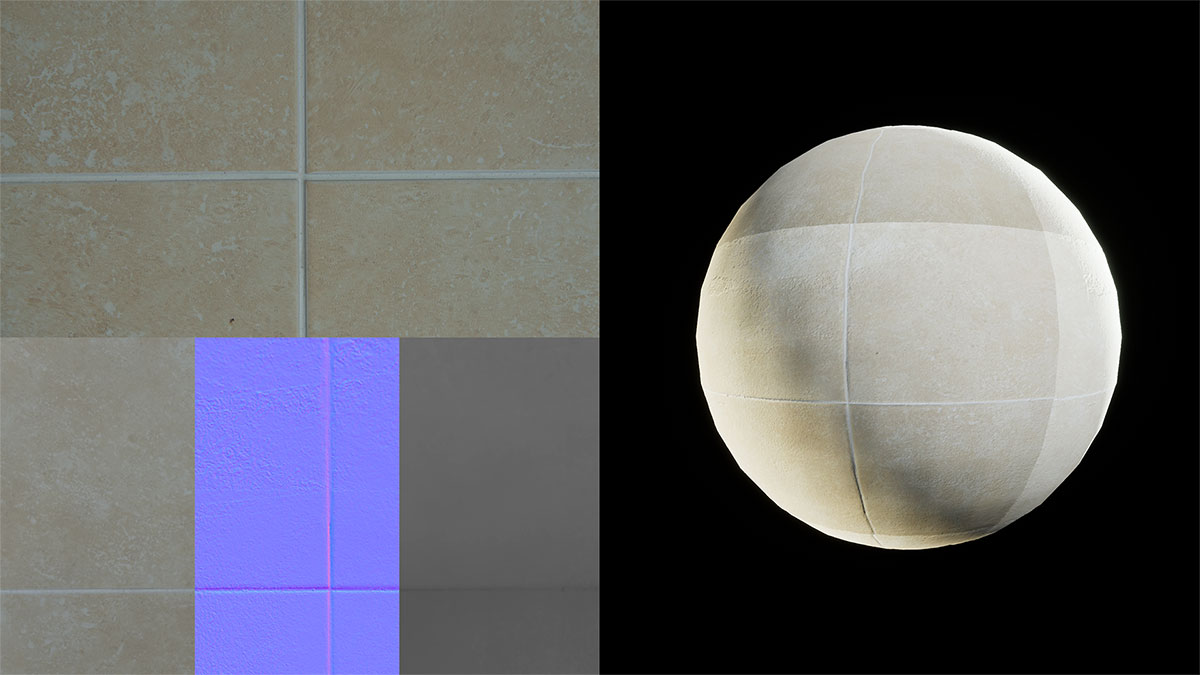 I went back to shooting from a singleangle here, only this time I didn’t bother with any context shots. I usually do these so Reality Capture understands where the finer details sit in relation to the larger area, but I took enough photographs that this wasn’t really necessary.

Tiling is terrible due to the lighting of the environment, but it wouldn’t take much to fix this. Also this is probably the best demonstration of normal and displacement maps working in unison. Displacement made very little difference to the previous surfaces where geometric variations were subtle and the normal maps did enough to imply greater depth. Here, where those variations are far more severe and pronounced, the difference a displacement map makes is far more obvious. 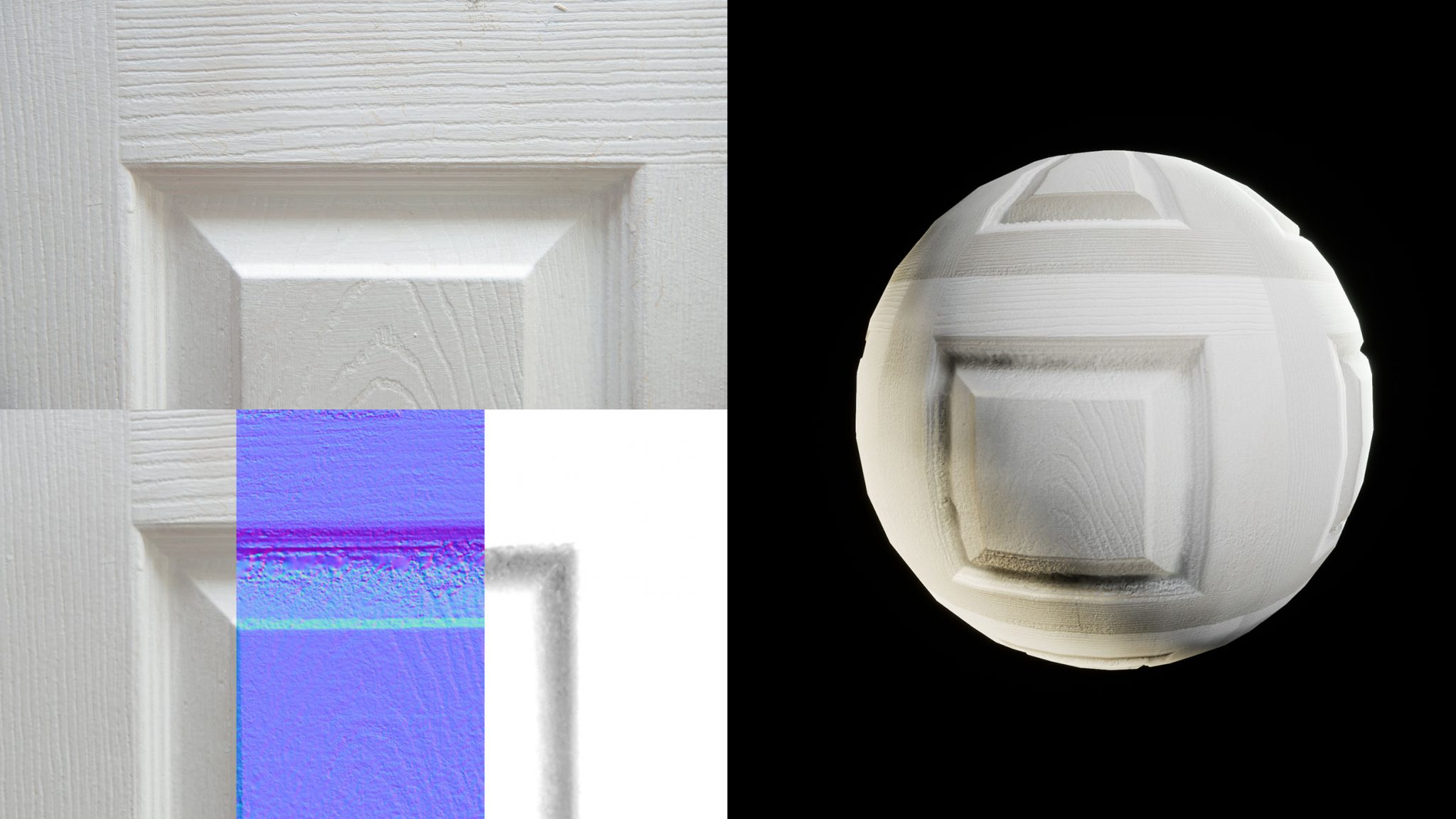 Since the last approach worked so well (no context shot or angles), I wanted to test it under more rigid limitations. I took only ten photographs but feel the results turned out pretty well.

Plenty of the really fine surface details were captured which look good on the normal map and as before, displacement makes a big difference. I don’t think the tiling is good enough for this to be useable in a foreground context, but if you just wanted to get a basic visualisation together, it’s not so terrible that it’d make you question all your life decisions. 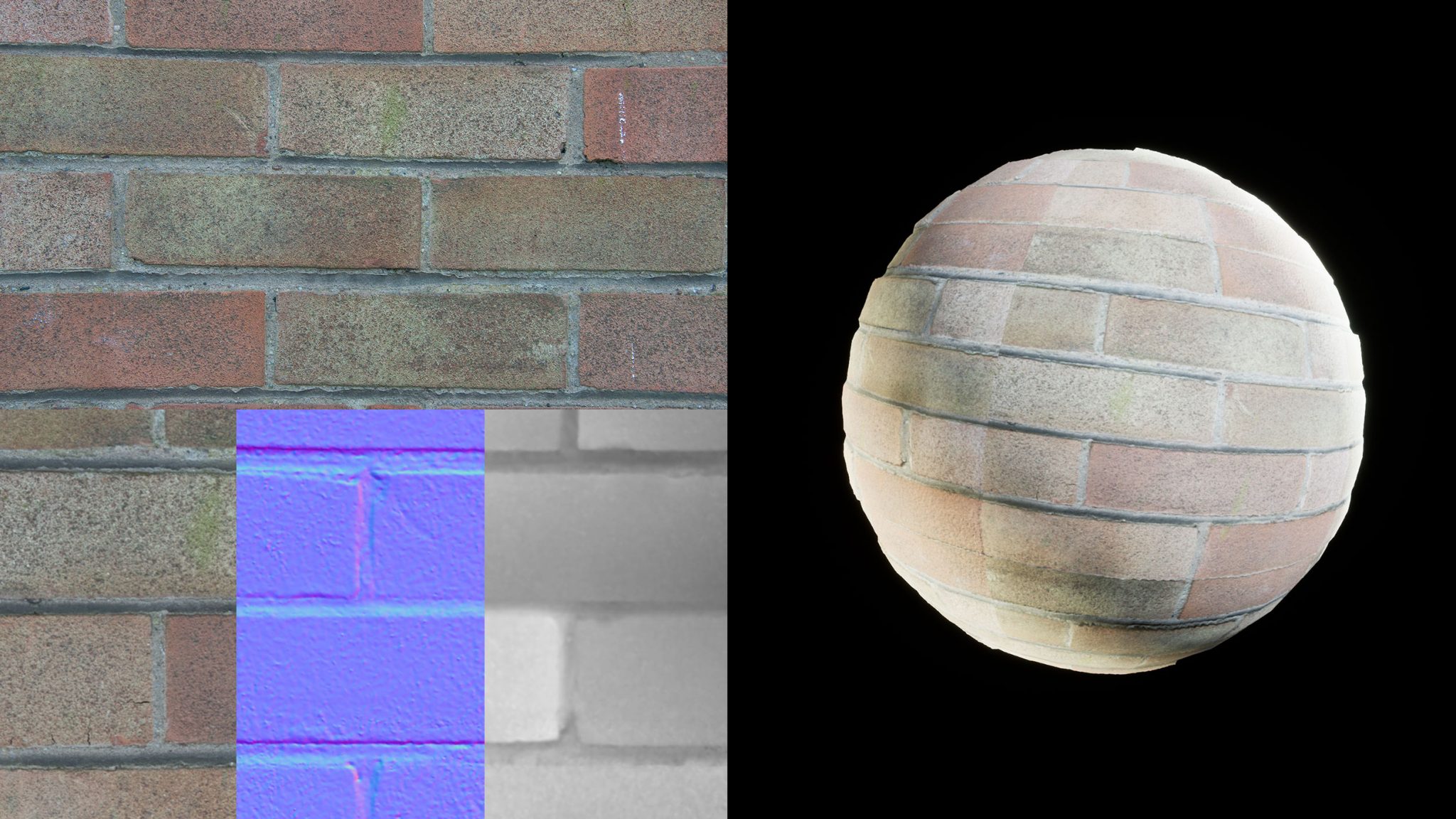 I got a bit bored of shooting flat surfaces at this point, so went back to my tired and tested rotational method from multiple angles to capture this small hole. I also cocked up the displacement so there’s bugger all benefit to that, but the normal works great and I’m actually quite surprised by how well it tiles.

I’m not suggesting you would use this as such, it’d probably be better used as a decal to add some variation to an existing surface. But in that respect, this amount of photos is excessive. Based on what’s been done so far, I could’ve gotten a comparable diffuse and normal map for perhaps a quarter the amount of photos.

I’m really running out of things to say. 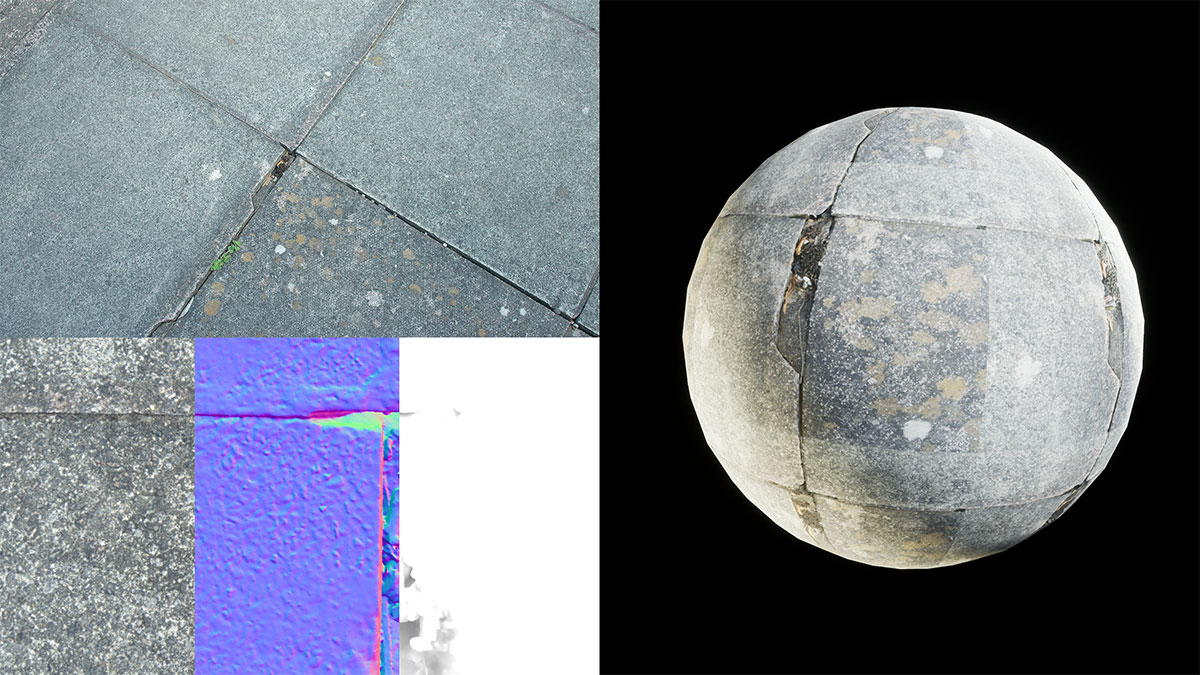 With this one, I gave myself the goal of reconstructing a surface that would actually benefit from the displacement map, which I’d say only one really has, thus far. Some fence panels seemed good as there’s a decent mix of finely detailed surfaces and severe geometric extrusions. I also limited myself to as few photographs as possible.

Seven seemed a decent number and the results would suggest so, too. Alignment is poor, but it wouldn’t take much work to clean that up and make the tiling neat. I’m consistently amazed by just how much you can do with just a few photographs. 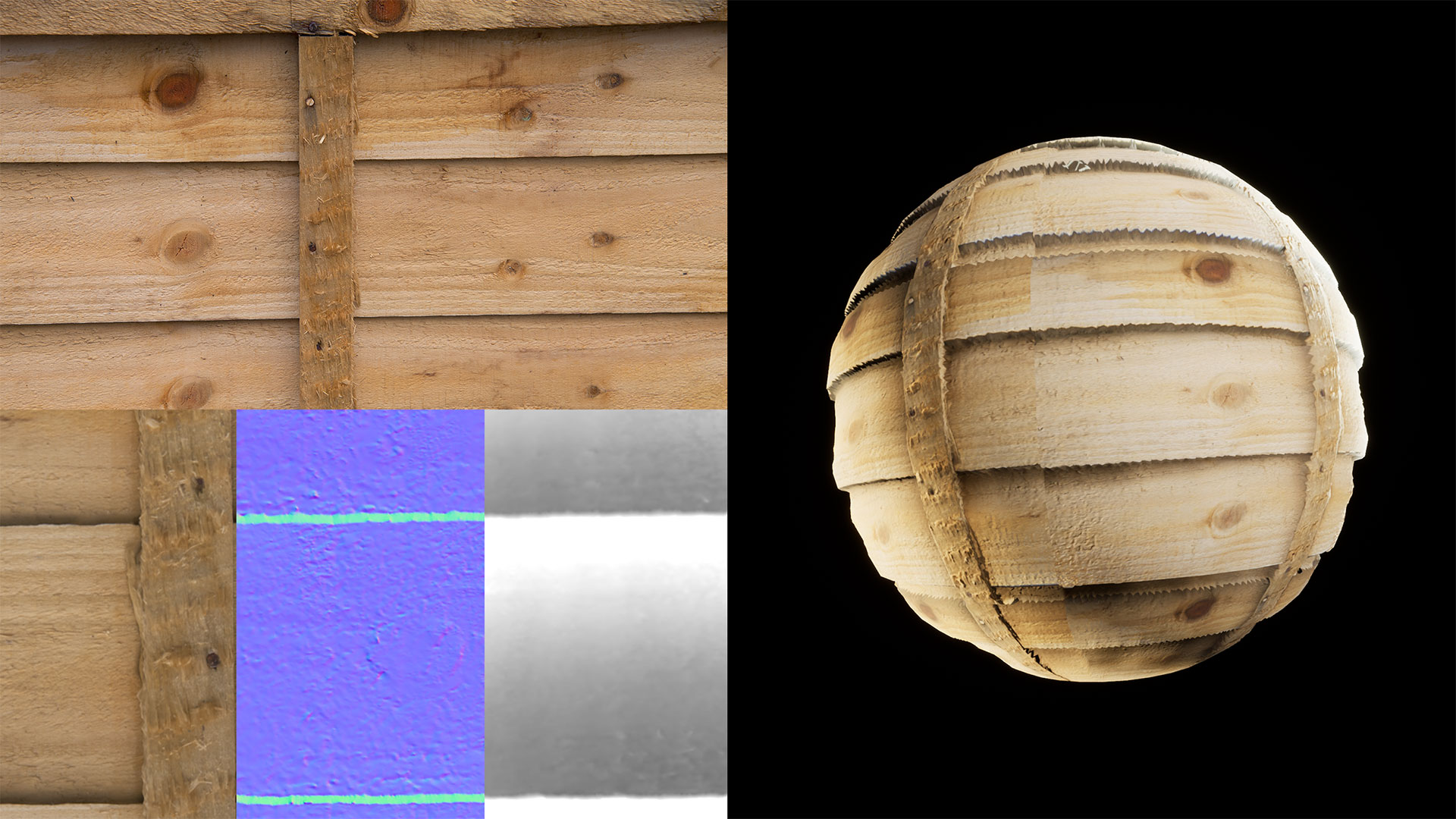 To finish, I decided to make a genuine effort towards creating something that could tile. The concrete slabs out the back of the house sit in a roughly square shape, so I took a single photograph from each corner and edge at a single trajectory. I didn’t need to get close because I wasn’t bothered about displacement.

While that aspect certainly suffered, the diffuse and normal both turned out pretty well and but for some slight colouration issues, it actually tiles quite nicely. 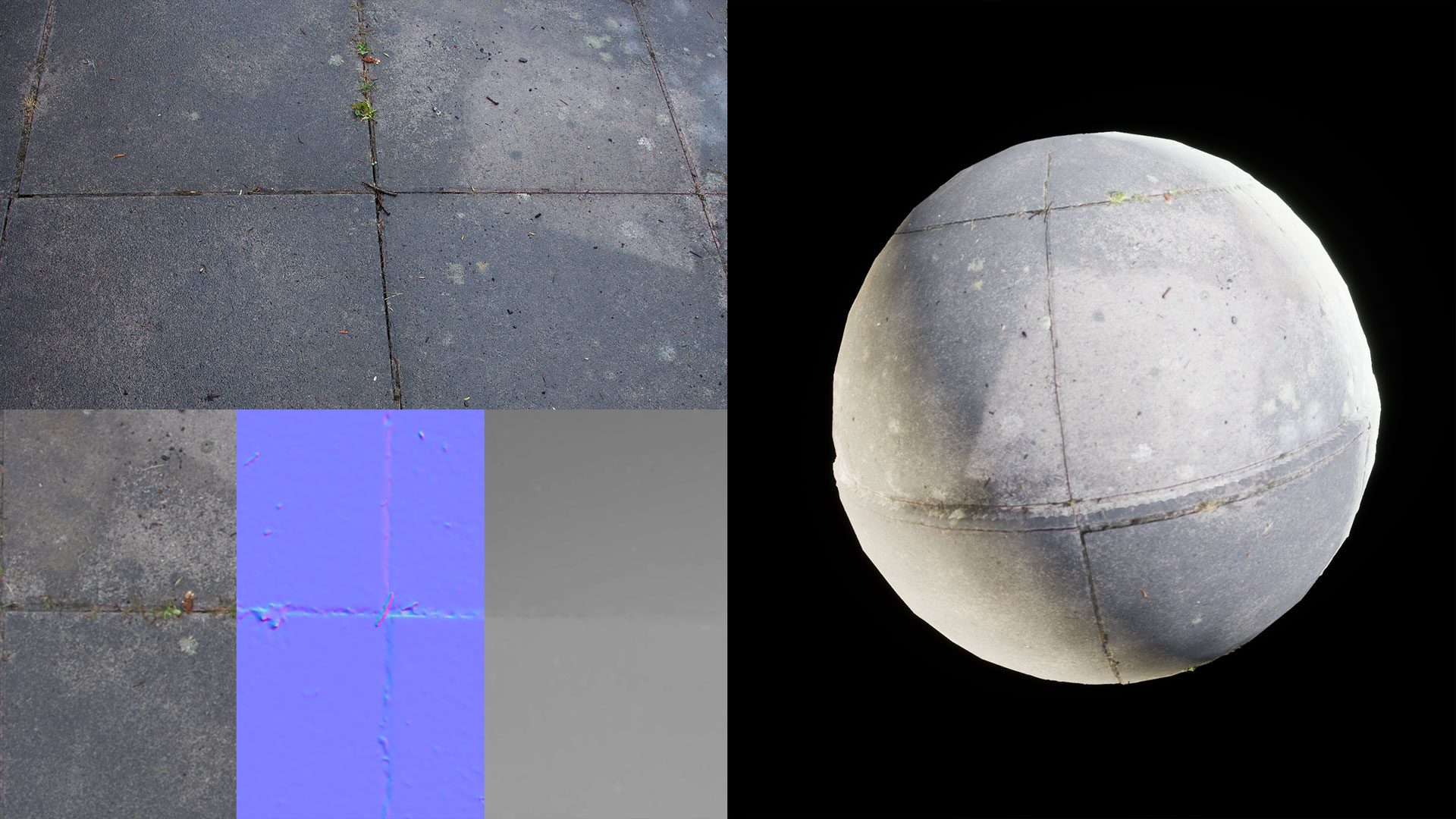 ...continued
Back To Top