Apex Shark Expeditions and Marine Dynamics, began collaborating in early 2020. The goal was quite simple – shut down the DSL, with the support of scientists, fishermen and the public.

“What’s the DSL, you boring git?” I hear you ask. The Demersal Shark Longline (DSL) fishery is responsible for imposing fishing limits in South Africa’s waters. No such limits have been imposed, because The Department of Environment, Forestry and Fisheries (DEFF) is ignoring the facts, scientists and fishermen.

I mean, sure, they’re a Governmental organisation and thus ignoring facts is kind of to be expected. But ‘being expected’ doesn’t mean it should be tolerated, is correct, nor a universal fact.

For example, Australia’s Government has laws designed to limit strain on the eco-system. Those include limits on how much can be fished from the ocean.

And as far as Shark Free Chips is concerned, that’s where the problem lies.

Why? What’s the problem, hippie?

To cut a long story short – there is (understandably) high demand for Fish and Chips in Australia. The aforementioned limits on Australian fishing has led to an increased demand for importation.

The DSL has been more than happy to supply this demand, in the process ignoring the devastation it’s causing South Africa’s marine ecosystem.

These species (which are protected by CITES) include Smooth Hammerheads and Great White Sharks: 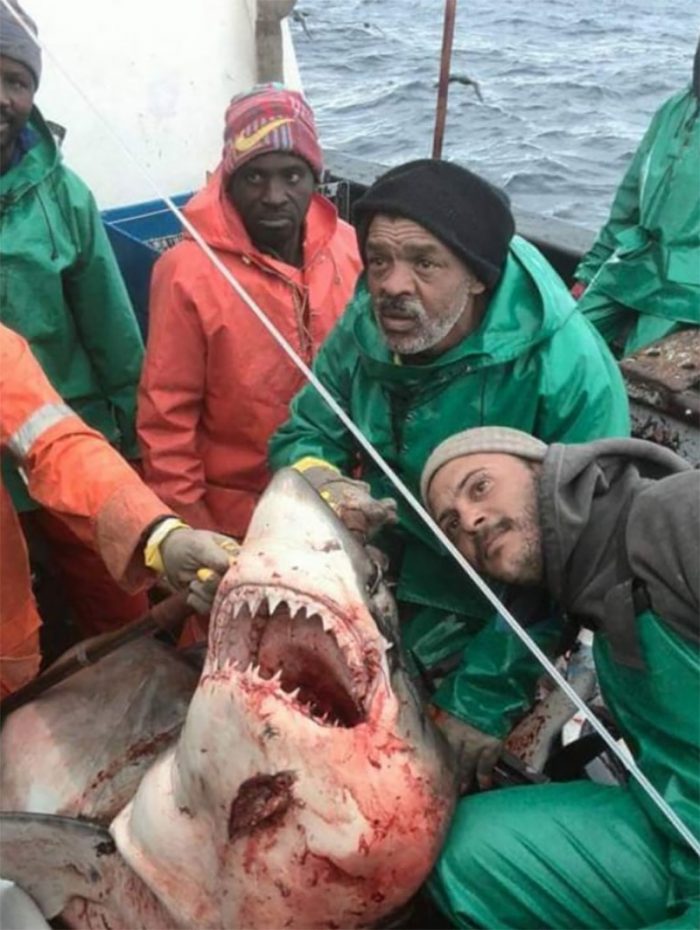 The great white shark is an endangered species. It is therefore protected. Look, see how well it’s being protected?

The goal of Shark Free Chips is two-fold.

Primarily, it seeks the closure of the DSL and integration of its staff into better fisheries. This fishery is breaking the law, causing damage to the environment and engaging in practices which are unsustainable.

Second, is the promotion of alternative, sustainable choices.

This product is often sold as Flake and Chips, in Australia. People don’t necessarily know what they’re eating. Nor do they know the potential damage being caused or the alternatives.

I personally believe consumer choice is one of the strongest tools we have for forcing change. As empowering as it can feel to patronise and belittle anyone you consider ‘part of the problem’ on social media, it’s a bitter, self-serving practice which only alienates the very people whose engagement these causes need.

There are better choices and Shark Free Chips aims to make that clear.

Through my work with Marine Dynamics Academy, members of the team put me in touch with Monique and Chris Fallows, of Apex Shark Expeditions. They were keen to get the project off the ground and needed someone who could help with visuals.

I’ll likely write a more detailed case study on the process at a later date. In short, my suggestion was to adopt a slightly different tone to the standard ‘the world is ending’.

Misery is a competitive field, especially in wildlife. If my Facebook feed is to be believed, everyone’s favourite animal is on the verge of extinction and in greater need of support than anyone else’s. Bare in mind, all of this is going on shortly after Australia’s devasating fires and is being launched in the midst of Covid-19. None of us wanted this to be another source of depressing content for people.

We all agreed that the overall tone of the site needed to feel colourful, accessible and engaging, while never undermining the severity of the issue at hand.

We likewise didn’t want this to be accusatory. There’s precious little doubt in my mind that plenty of people will use this issue as an excuse to ‘shit on Australians for destroying South Africa’s oceans!!’. Bollocks to that.

I took some visual cues from comics and Disney (very, very loosely in respect of the latter, I think you’ll agree). I wanted to make the whole website feel as if you were looking at a restaurant menu, so made that the basis for the overall structure and visuals.

The illustration style is light, but the content and depictions I aimed to keep as representative of reality as possible.

We can all do our part

My extended family in South Africa, I ask that you please check the website and Tweet The Minister when time allows.

Everyone outside this wonderful country, can do their part by promoting and sharing sustainable choices, in Australia especially.

I myself have been inconsistent and in some cases, frankly lax with some purchasing decisions when it comes to fish. It’s something I’ve consciously worked towards improving in recent months, but the realities of what’s going on in South Africa’s waters has really driven things home. For me, at least. Anna thinks the world should burn.

Thanks to Monique and Chris Fallows, Wilfred Chivel, Brenda du Toit, Michelle Jewell, Enrico Gennari and anyone else who has helped and/or contributed along the way.

Likewise, please do check out some of my other shark-related ramblings if you’ve time, also.