We’re into week three of my self/Covid-19-isolation imposed daily photogrammetry challenge. I honestly thought I’d get bored and pack it in after one day. Go me.

The first week (which was only two days) I reconstructed a couple of toys/models from in the house.

Week two was all about whatever crap I could find in the garden. I was pleasantly surprised by how well those in particular turned out. I also managed to do one too many this week, which I’ve only just noticed. W/e.

So for week three, I want to introduce a bit more of a challenge. Instead of reconstructing single objects, this week is all about piles. No, not the kind I fear I’ve got every time a slightly itch downstairs occurs.

Rather, piles of items and objects. The main challenge/goal is going to be reconstructing those tricky areas which are hidden behind numerous objects.

Some wood, stones and a little twig thing

What worked: Consistency in details, most small/hidden areas, texture

What didn’t work: A few areas were hidden (more careful camera use/better coverage), forgot to move the base (pratt) 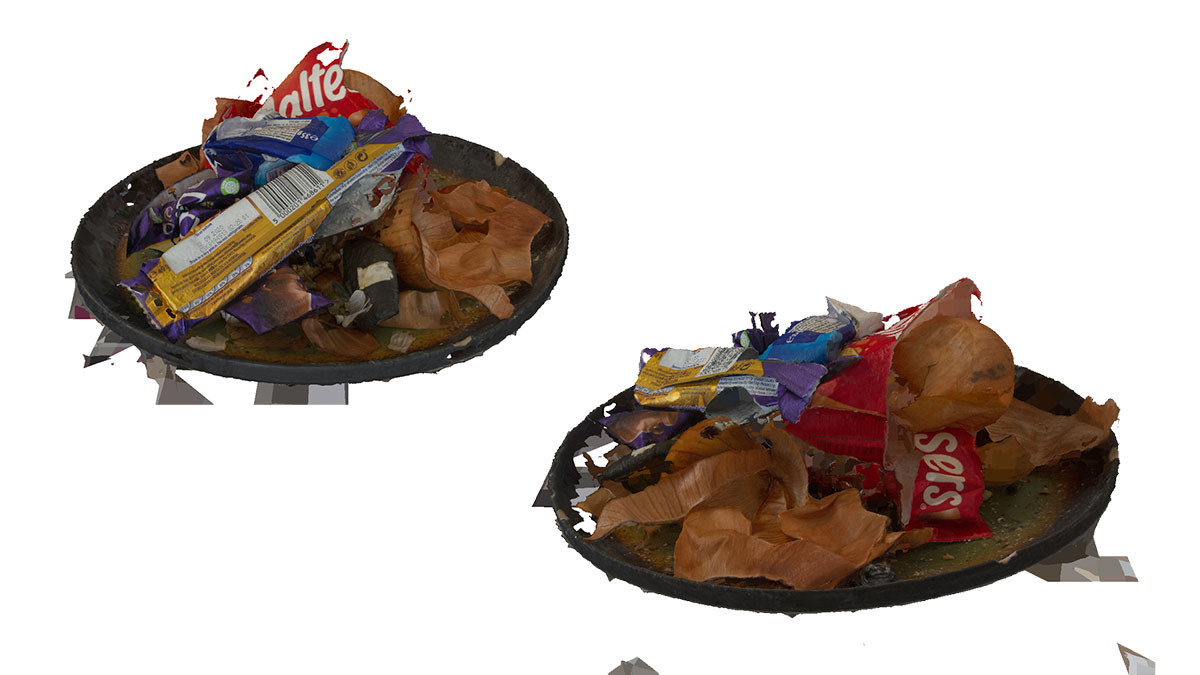 It's a mess. I mean it's literally a mess.

A brick, bag and some soil

Some fruit and a little shark thing

So this whole ‘What worked / What didn’t work’ thing has fast become tedious and void of actually useful information. Being the anarchic soul that I am, it doesn’t stress me one shizz to drop that nonesense right here, right now!

I was in a rush here, so gave myself the strict limit of “Just do it quickly”. Words we’re all familiar with.

Although some of the finer surface details came out pretty well, the overall reconstruction is pretty garbage. Once you see past the initial prettyness and take in the bigger picture, you find a broken, hollow form which barely resembles reality and contains many flaws, regardless of the angle its viewed from. Like socialism.

Oh yes, I am provocative. 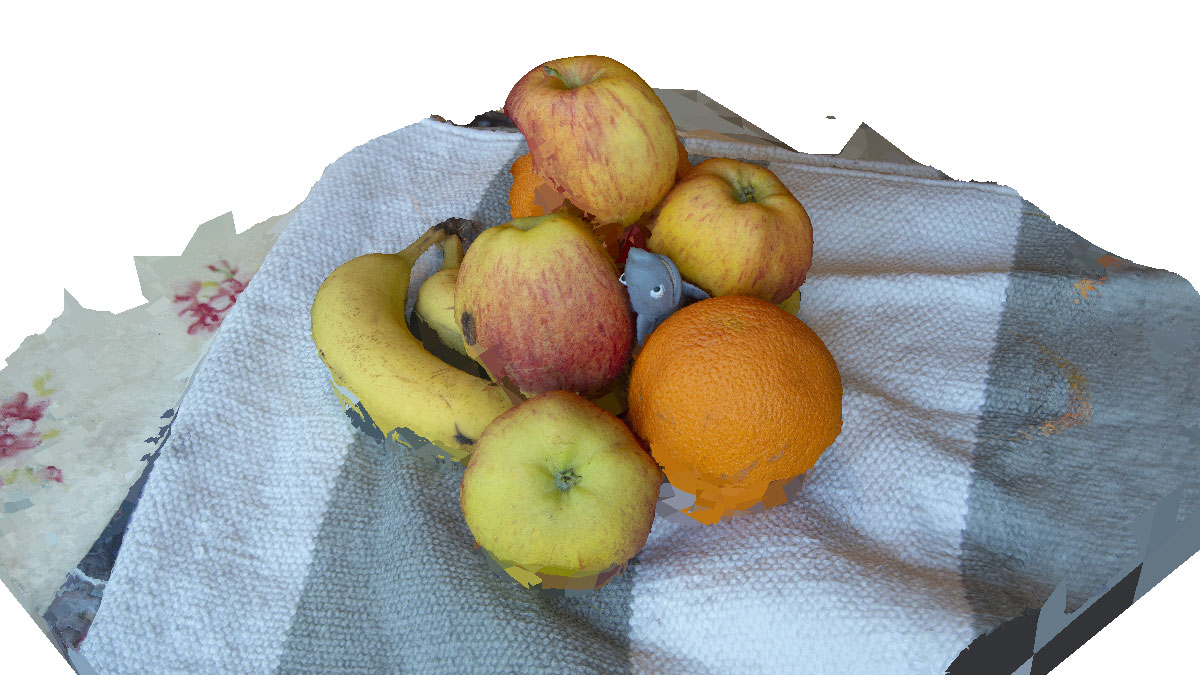 Because of course there's a shark in there.

A chair with crap on it

Another attempt littered with limitations. In addition to going as quickly and with as few photos as possible, I greatly restricted how much space I could work in.

There wasn’t enough room to get really low or get behind the chair. This forced more closeups, so I took more overhead shots than usual to give those as much context to work with as possible.

Not bad, given the circumstances and the pillow came out really well, as did the cat toy despite being so small. If you wanted to use this as a game asset, it’d probably be worth extracting the pillow and just rebuilding the actual chair. 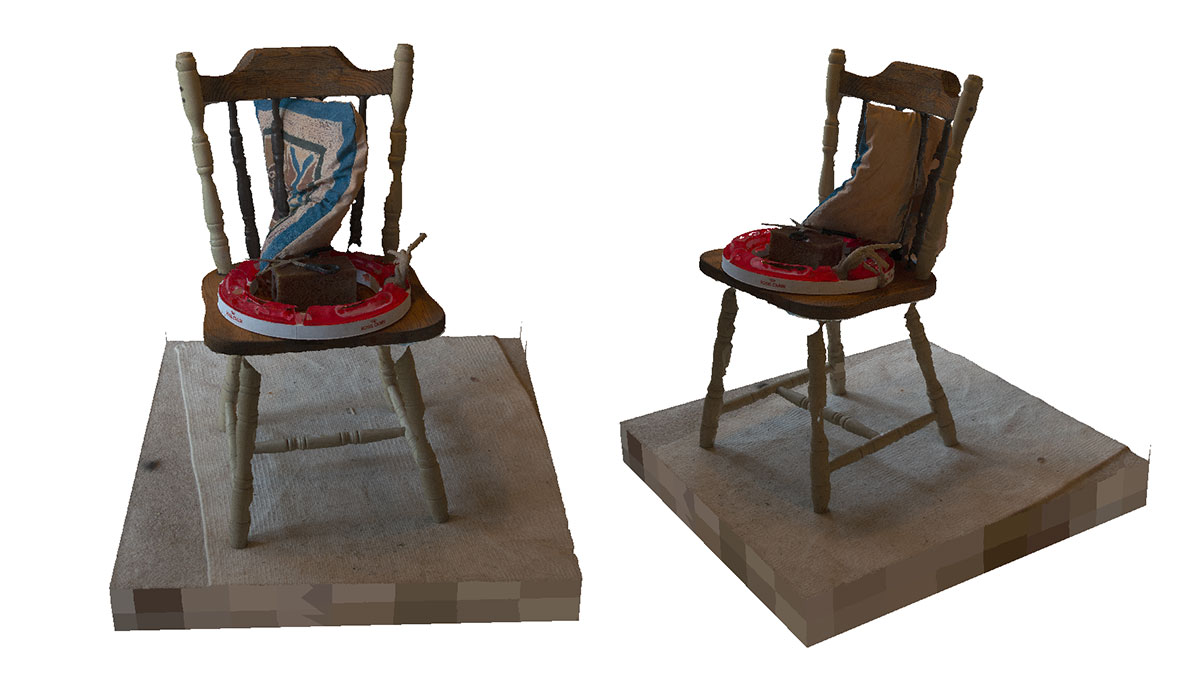 A glass bowl with crap in it

This was more just to see what would happen. Glass is tricky. Reflections and refractions tend to give photogrammetry software a bit of a headache, as they cause inconsistencies in the various patterns. In some cases, they’re so smooth that patterns can’t be identified.

Continuing my time and photograph limitations, I really just wanted to see how surfaces in the bowl would come out.

The results are somewhere between total crap and not bad. Total crap because with the except of the pillow, accuracy is very poor. Not bad because I got very little coverage of those lower areas. given the circumstances and the pillow came out really well, as did the cat toy despite being so small. If you wanted to use this as a game asset, it’d probably be worth extracting the pillow and just rebuilding the actual chair. 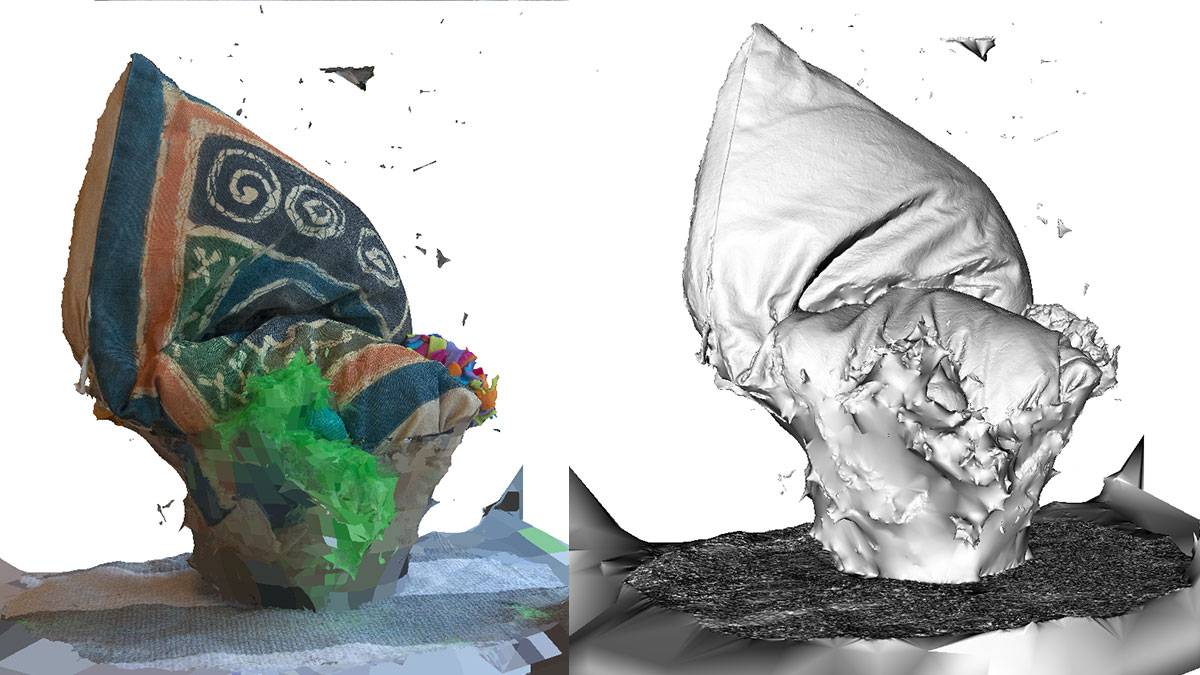 It’s been a bit of a waste of time, if I’m honest.

Weeks one and two were quite educational. Each reconstruction I tried something new and picked up something useful in the process.

These have suffered for me not really having the time to really approach them as comprehensively.

So that’s the plan for next week – I’m going to pick subjects and take and approach which I hope to be a little more educational.