There’s an old games industry proverb, the origins of which stretch back millenia: a game isn’t a game until it looks like a game.

I mean, it’s nonsense that I just made up, but it’s also a useful means of highlighting the challenge currently ahead of us.

At the end of the previous entry, we had a working game. It was a bit clunky, but the goals and means of achieving those goals were clear. That’s largely thanks to Tom, who has a brain.

My input now needs to extend beyond the systematic design of the game and into the production of actual art assets.

I’m taking a giant leap of faith that I still remember how to model.

I don’t even remember what I had for breakfast this morning.

Or where I’ve put my keys.

Like with other people’s feelings, I really can’t be bothered to think too much about this. I figure a cartoon style that makes use of simple colours and shapes will suit the game’s tone and technical demands. It’ll also grant some flexibility into how much character I can instill into these assets.

So I’m just going to run with that. No mood boards or references (at this point), just the raw expression of a creative vision that will be tweaked and iterated upon into something tangible once Tom gets involved. For now, I’m captaining the ship.

I start by sketching basic concepts for each of the main assets. Namely: scoreboard, targets, spawn button and dispenser.

I do the target first, since that’s where much of the player’s focus will be. It needs to float in mid-air, so I figure some sort of clamp-helicopter (henceforth known as ClampCopter) will facilitate this. Once I get a general look that works, I move onto the other assets. The whole process takes just under a couple of hours, including the back and forth on various aspects. This culminates in the following draft: 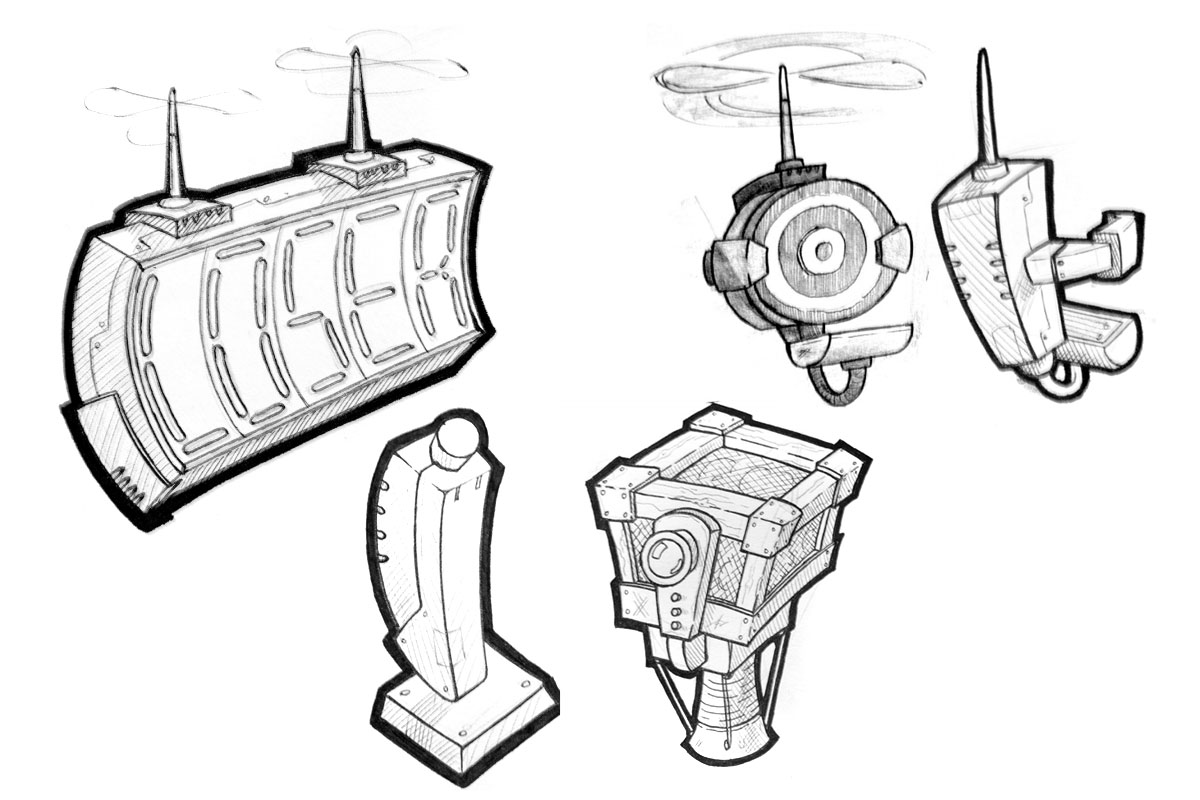 Rough concepts for each of the main assets required for this beast.

I’m generally happy with these. There’s a consistent use of curved surfaces and hard edges which gives everything an sense of ‘togetherness’. Cohesion might be a more appropriate word, but I’m sticking with togetherness.

The designs aren’t perfect, but they communicate a unified vision and at this stage, that’s what’s most important.

The only exception to this is the dispenser. I liked the idea of the balls being in a big wooden crate, but it doesn’t really fit with the other designs.

My first 3D draft of ClampCopter makes use of very simple geometry with minimal details.

I do so using Maya, because that’s pretty much all I’ve ever done hard-surface modeling with. I stick closely to the original sketch, but do end up dropping the light which attaches to the asset’s underside.

It looked cool in 2D, but in 3D it just gets in the way. The user’s attention needs to be focused on on target, but the light just detracts from it. So it’s gone. Dead. Doomed.

Thirty minutes or so later and there’s a workable draft I share with Tom. 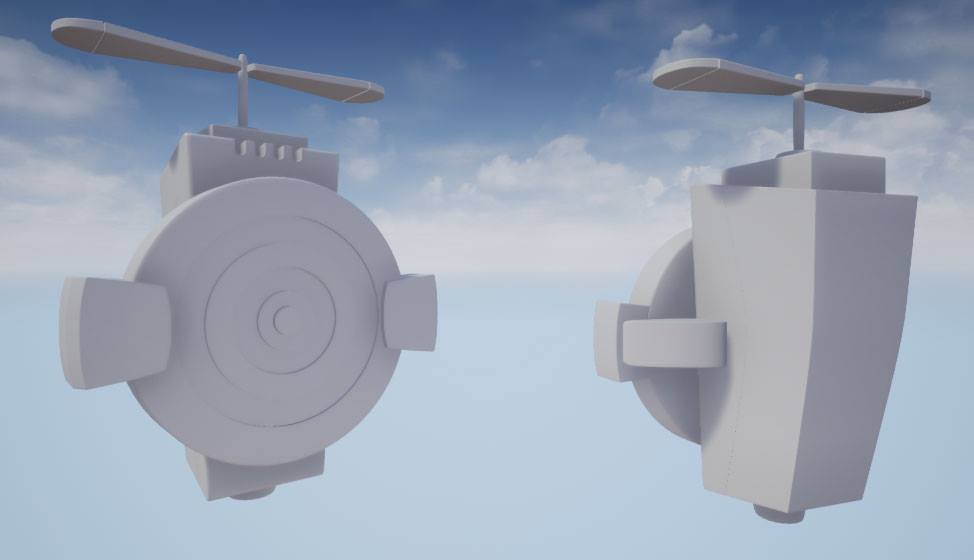 ClampCopter version one – best model ever.

He digs the overall style, his only feedback being that it’d be cool to have a pair of eyes over the target.

I introduce these on the second version. By going for a semi circular shape, the target sits nicely underneath but also gives the asset an expression. This fits the cartoony tone and I congratulate myself… alone.

Taking this a step further, I add a ‘vent’ to the front which makes no structural sense, but works great as a mouth.

The idea is that when a target is successfully hit, it is dropped from the clamps and blades stop spinning, resulting in ClampCopter’s immediate plummet. That it appears to be screaming when this happens is good.

A couple more additions include an additional pair of blades, power unit on the back and actual clamps for hands.

I’m satisfied with where the asset is at this point. This isn’t the final version that’ll go into the game, but it demonstrates the various character values that the other assets need to embody.

Modeling the other assets

I move through the first portion of the remaining assets with reasonable speed.

The stick becomes a cricket bat because despite hating cricket, I hear the flatness of the bat makes for a good battering device. That should make smashing balls in the direction you intend a simpler process than at present. Phrasing.

The spawner/button thingy gets a slight sci-fi treatment to be more consistent with the style of ClampCopter, but I overdo it. The size and everything is fine, but aesthetic is off. It’s just a little bit too industrial. Since I’m only after general proportions and silhouette for now, I’ll worry about fixing that later. This is how I approach every DIY problem and I can’t see it going wrong here.

Walls are last and I take a modular approach to this. We want to be able to adapt the layout of the environment without having to remodel too much. So I make a straight wall block and a corner wall block, with a view to mixing and matching where needed. 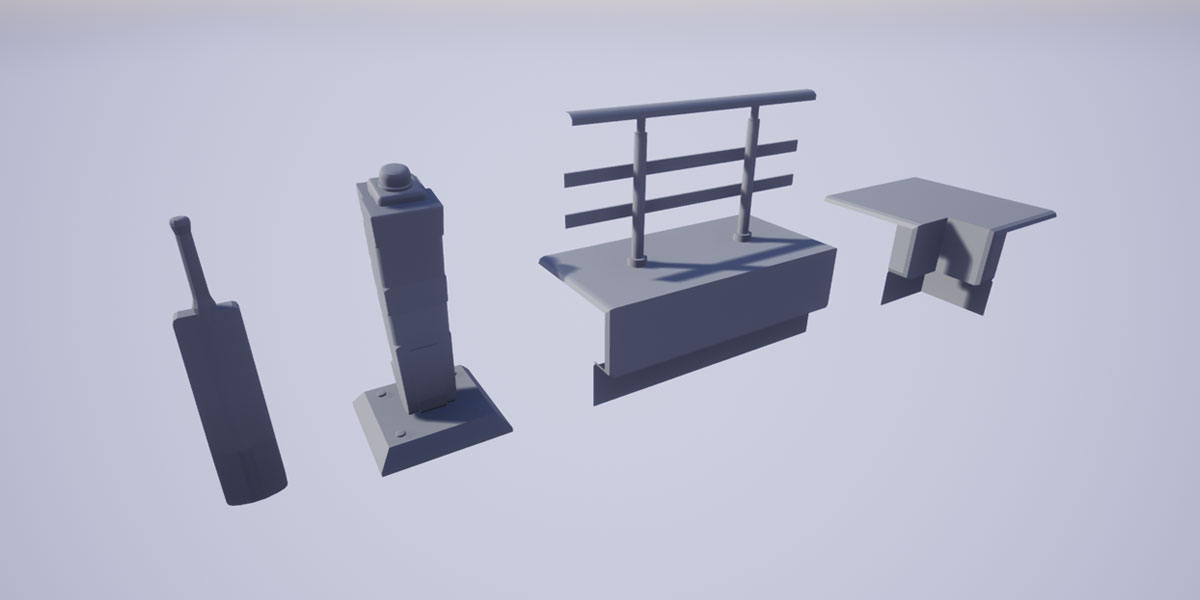 The scoreboard is next and I pretty much just rush through this one.

It’s a pivotal part of the aesthetic, given how important it is to communicating game status to the player. For now though, it just needs to be flat, clear and proportionally accurate.

And that goes for all of these models. Once we’ve incorporated them into the game, have tweaked the gameplay and made notes on design or sizing amendments, then more time will be invested into getting these assets just right. 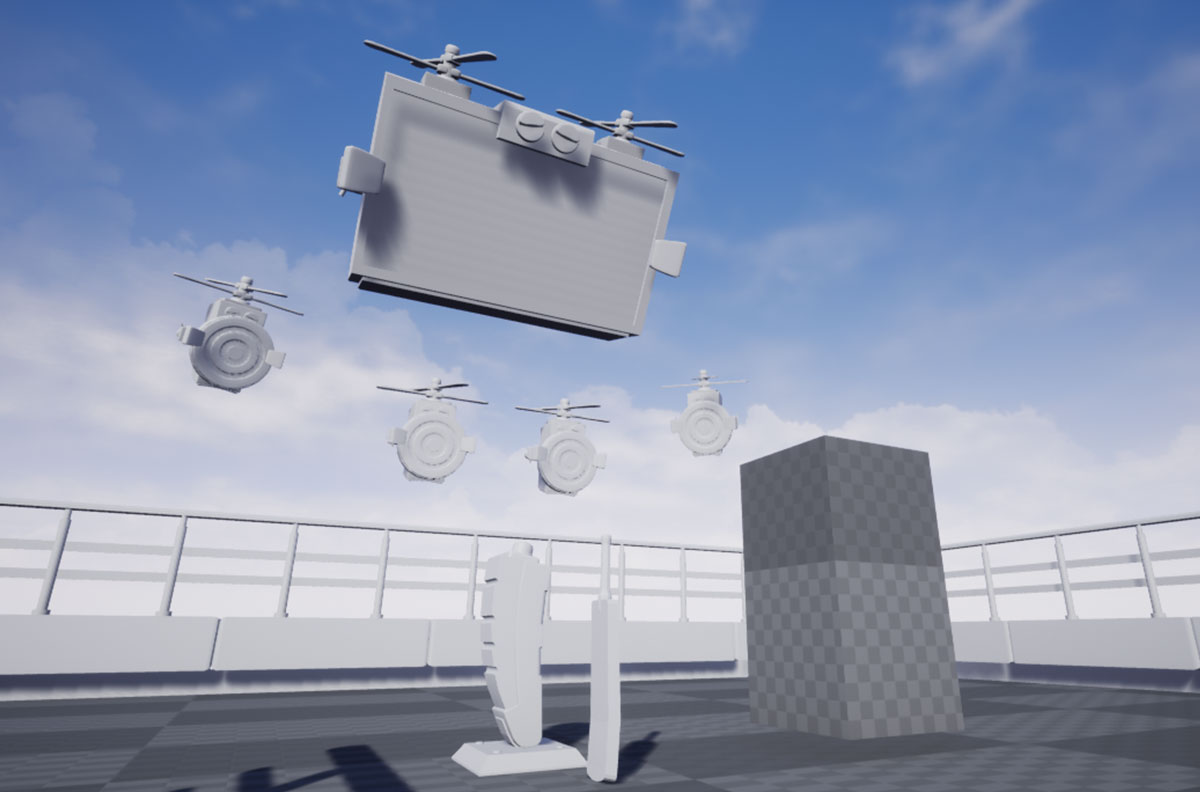 A little bit more context with the scoreboard and targets composed together.

Finally, it’s the dispenser. I’ve decided I hate the sketch I did, now that I’m seeing everything in 3D and getting a better idea of how it all works together.

I want to go for something a little more toy-like. It would probably benefit from being simpler, too. Of all the assets in the scene, it’s likely the one that’s going to command the least amount of attention and when it does, it’ll be from directly beneath.

I start thinking of those gum ball machines, finding one on Amazon that I like the general profile of. It takes a few minutes to model. 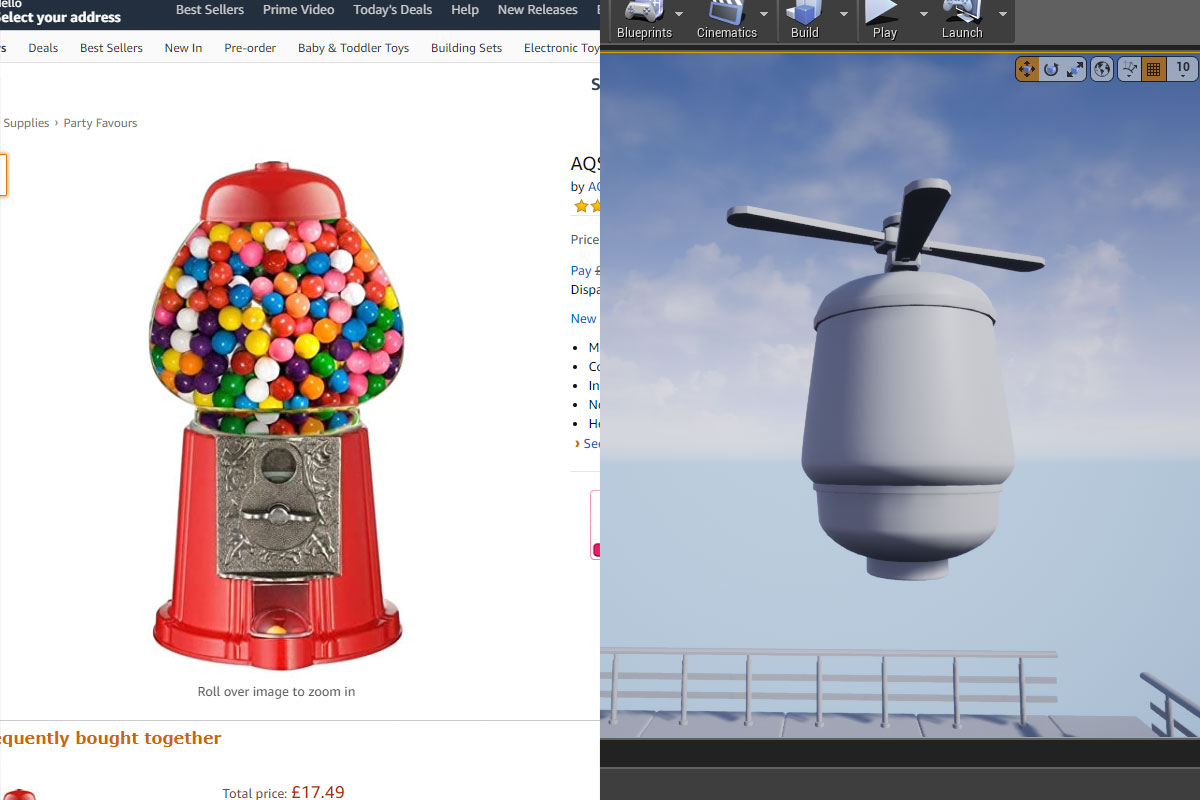 I like to take my inspiration from the highest examples of creative design.

That’ll do pig, that’ll do

We might feel differently when it’s all seen in action, but I’m happy this does the job. With that sorted, the base assets for the game are essentially done. The balls themselves will be done in UE4, because less work for me. Those seconds count.

I might add some more detailed props at a later date. Things like background buildings, vents, perhaps a door that leads to the roof.

But as none of these are important to the actual running of the game, they can wait.

I chuck the assets together in a quick mockup of how I imagine the final game will look, with some background brushes standing in for a city scape.

It almost vaguely looks like something which if you blurred your eyes and was suffering a concussion, you might be forgiven for mistaking it for something that could potentially roughly look a bit like a videogame. Maybe.

Getting this new art into the game

You know what? As far as basic assets go, I’m really happy with these. There’s a sense of character and enough visually for us to start getting a clear idea of how the game will feel.

After weeks of struggling to find the free time to invest into this, I feel energised. I am focused. Vicon (the company who essentially build all the motion capture stuff and supplied the University’s) have been in touch with renewed interest in the project. Everything is coming together.

The core gameplay is down! The basic art assets are down! I have enough spare time to get this to the next level! Surge of productiveness arriving in 3, 2…

Oh, hello Coronavirus. What’s that? You’re throwing the planet into turmoil? We all need to start adapting our work patterns and hardware access with immediate effect? Cool, cool.

With all that’s going on, jumping in and out of Motion Capture suits probably isn’t the best way to spend my evenings. In the grand scheme of things, this wee project being delayed isn’t that big a deal. Even as someone stricken with terminal indifference as to the general state of society and my own health, I think we’ve all bigger concerns at the moment. Eurovision being cancelled is clearly top of that list.

Hopefully, there’ll be further updates on this sooner rather than later. I might even tweak these assets further so they’re closer to the final versions when we finally get the game built. It really depends on whether Anna is going to condemn me to the top floor of our home.

Anyway – to everyone currently in self-isolation, adapting their work patterns and/or generally doing what they can to both reduce the spread of this disease and keep the world turning, thank you for your efforts.

Stay safe and listen to this banger.