The only other time this happens throughout the year is Christmas day. Because I am a child.

“What’s happening?” I think to myself. Is there a new Doom game out? Is The Dark Knight being re-released in theatres? Or is today the day Scarlet Johansson comes to her senses and seeks my eternal companionship? Well she’d be mightily disappointed if so – this piece of ass is spoken for.

I don’t mean for that to indicate any negative feelings toward Tomsk. The city and its inhabitants have been very accommodating and it’s been a great couple of days sight seeing.

But I’m excited to be seeing somewhere new.

We each grab a quick shower (separately) and Alex informs me that Elana will be joining for the next couple of shows. It’s always nice to have someone outside of the band joining us. It helps to create an air of calm.

We clamber into the van and within a couple of seconds of entering, I’m asleep.

That’s what she said… ugh. 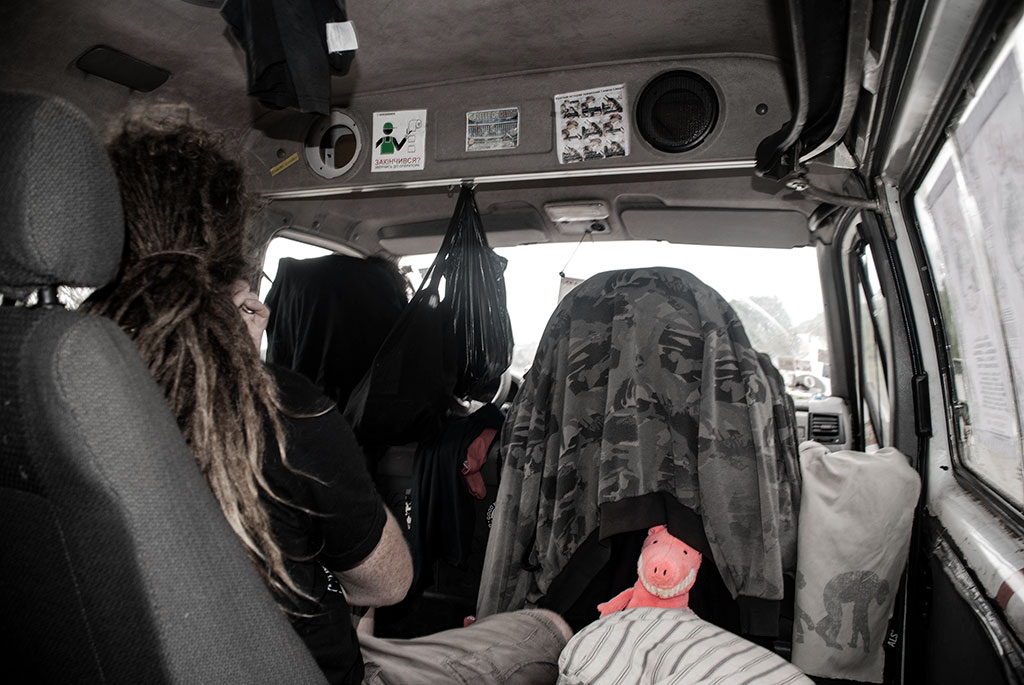 Peppa pig is now our captive. Whatcha gaen do bruh??

I awaken just as we exit Tomsk.

I know this because there is a sign that looks like it says Tomsk and we are driving past it. 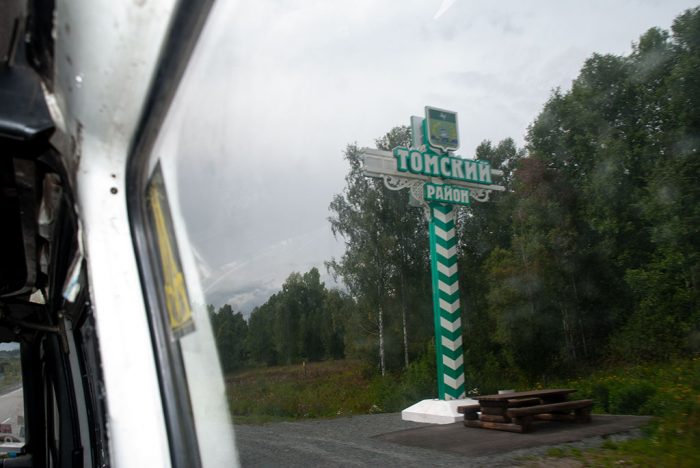 The landscape quickly turns alien compared to what we’ve been used to this last few days.

The jungle of dense, concrete rectangles, delapitated wooden skeletons of buildings old and spots of green shrubbery, make way for a sky, grass and little else.

The vast expanse reaches beyond the horizon, void of all but a dense wall of trees that separate it from the mass of cloud stretched widely above. 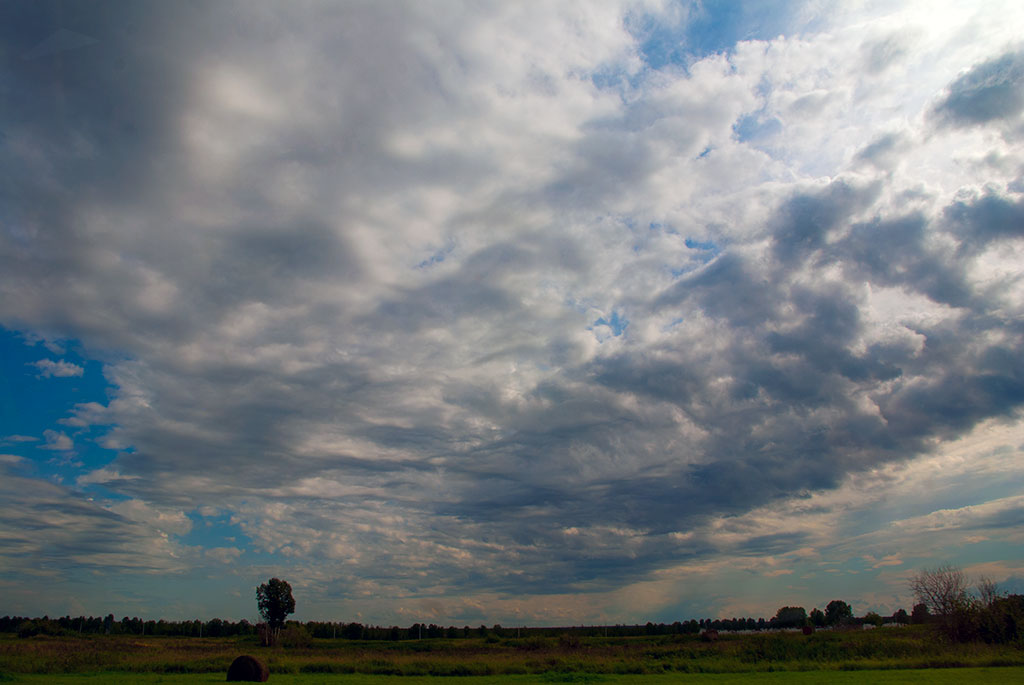 Over the course of several hours, I slip in and out of consciousness.

Each time I wake, I observe the vast environment we’re occupying.

There is barely any change.

Sure, trees sometimes give way to electrical lines and on occasion, rivers and concrete replace the blanket of grass and shrubbery.

But each new picture is a subtle variant upon that which preceded it. The culture, tone and palette is consistent over hours upon hours of travel.

It reminds me a hell of a lot of S.T.A.L.K.E.R., a game set in the areas surrounding Chernobyl.

The engine itself did an incredible job of capturing genuinely bleak but beautiful scenery. The more time I spend in the part of the world it depicted, the more impressed I am with how accurate its depiction is. 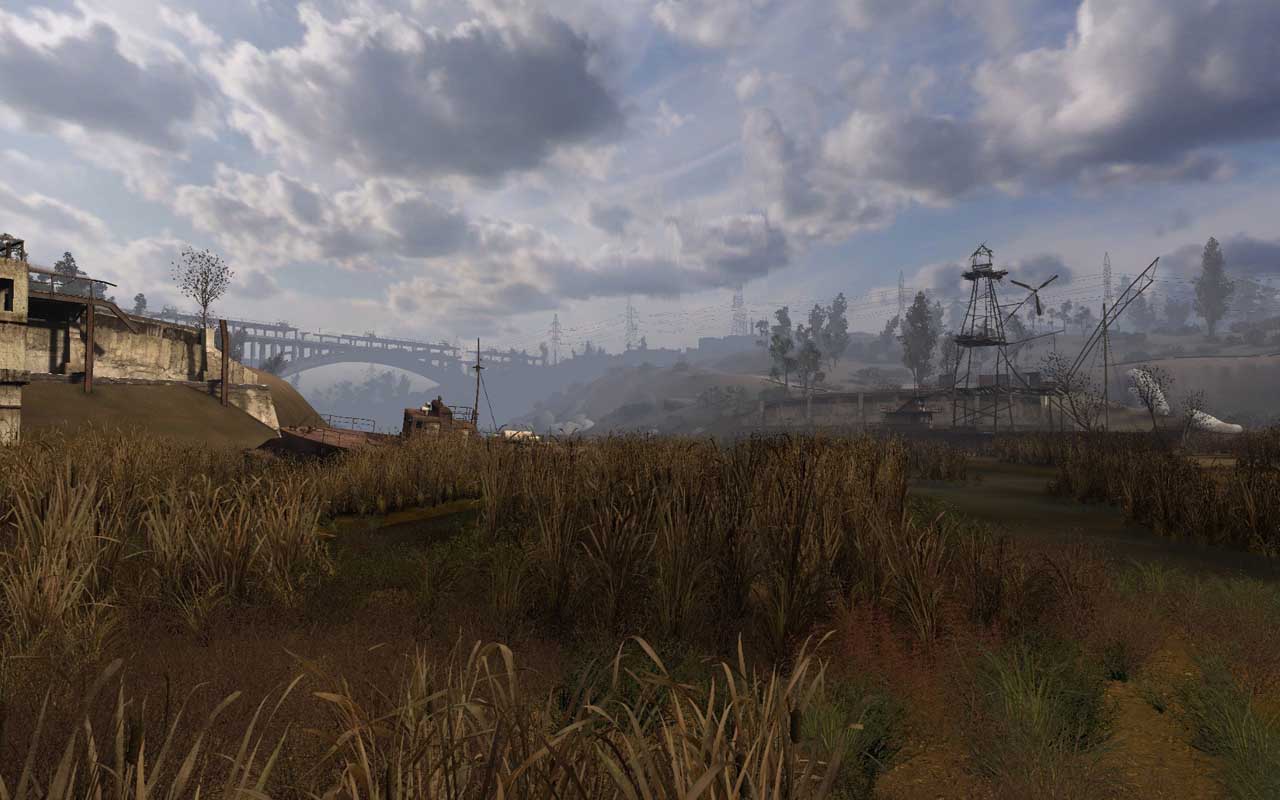 STALKER was the shit. It also ran like shit.

I ask Alex where we actually are. He tells me and I immediately forget. I’m sticking with ‘somewhere between Tomsk and Krasnoyask’ for now.

The difficult I’m experiencing in holding my own attention for so much as a minute is a sign that perhaps, I need to sleep. For more than 15 minutes at a time.

Lunch time… are we on the menu?

I’m being woken up again. WTF is this nonsense?

Ah, food. I withdraw my complaint.

Clambering out of the van, I hear talk of cannibals. I’m not sure why. I lose interest quickly.

We sit inside and get comfortable before Matt departs to take a phone call.

While Alex and I are observing the menu (we recognise eggs and ravioli), Matt returns looking quite distressed. One of his dogs has accidentally eaten gravel and is now at risk of internal injury. That’s pretty serious.

Alex suggests “Well then maybe feed it dog food instead?” and this does not go down well. Before I get chance to cackle inanely, Matt’s advising Alex quite forthrightly, that he might consider exercising silence for the immediate future.

That just makes it harder not to laugh.

In most cases I wouldn’t hold back. My tendency to laugh at inappropriate times and inappropriate volumes is well documented. This is usually irrespective of context.

But this case is different because a dog is involved and dogs are the shit.

I would say that where people are concerned, my empathy is largely an academic one. I mean, when something bad happens or someone is in pain, I can understand why and ‘intellectually’ sympathise with their position. I rarely feel anything though, certainly not anything like a tightening of the chest or clenching of the stomach. It’s a mental understanding moreso than a physical, emotional one. That’s not true in every single case, but consistent enough that I consider it my default emotional position.

But it’s a little different where animals are concerned. Or at least, the ones I don’t eat or whose race to extinction I am hastening through ignorant product purchases. So while I understand the news is sad for Matt, I feel sad for the dog.

On the other hand, this is probably the single wittiest thing I’ve heard Alex come out with in almost fifteen years of knowing the guy. This is a genuinely difficult situation where both my gut and considered responses are at odds with with each other. Suffice it to say that keeping a straight face is nigh on impossible.

I think I might poop my pants. Cannibals or not, this is going to be a difficult meal to survive.

Oh and of course, the options on the menu are eggs. At least a hundred items are listed, but when Denis asks directly which are available, only ‘Eggs’.

Everything we get some questionable gruel into our bellies, eventually settles and people are friends again.

Shame. I was looking forward to coming back a man down. Or a ginger down, at least.

We clamber back into the van to continue our journey to Krasnyotsk. I’ve no idea how much further we’ve got to go, but I’ll doutblessly be skeeping well tonight.

Yet another long road

I wake up shortly before we drive past some ilk of factory.

With the sun gradually setting, it’s a rather picturesque scene.

By the time we stop for fuel, the sun is spoiling us with the day’s final moments of golden light.

I stop to take a photo from the back. 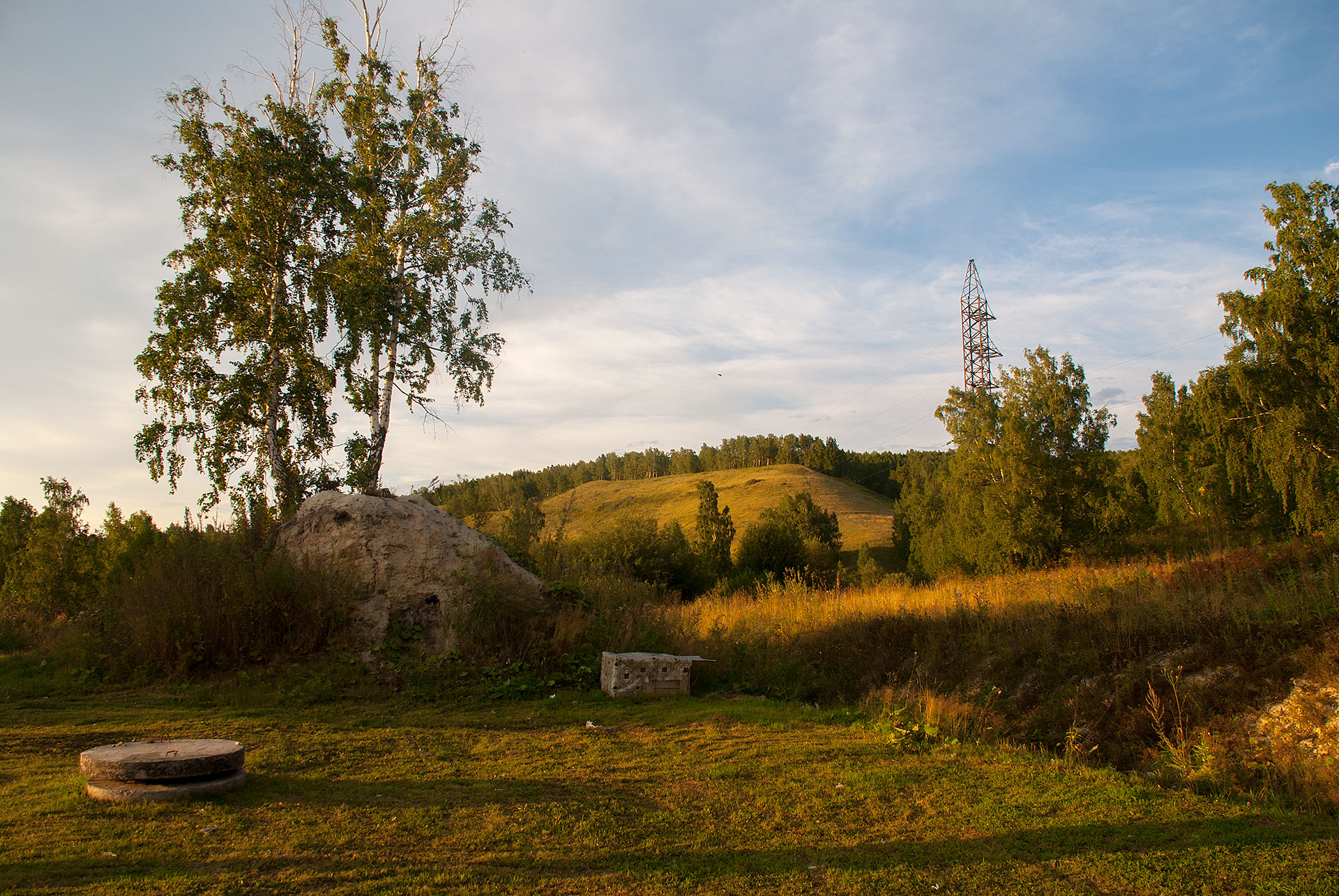 I could take this type of picture pretty much anywhere. I’ve been to innumerable stops like this. I get an odd sense of familiarity, similar to that day in Tomsk.

Countless miles away from home and most other places I’ve visited and I’m stood in a spot that I feel I’ve been in a trillion times before.

Once again, it’s not a particularly deep or revelatory experience. It’s just another occasion where in the midst of this mad endeavour, my body is miles away from anywhere I’ve been before but for a few moments, my soul is in several disparate, but unified points in time and space, simultaneously.

At long last, we arrive

It’s darkness, I have no idea how many hours have passed since last I was conscious, but nevertheless… we are here.

We enter the flat of tonight’s hosts; Ivan, Tityana and their two cats! More cats!!

Said felines immediately begin investigating our bags, while a glass of red wine is thrust into my hand.

This is fucking great.

This is legit great.

Wine and cats? Could this get any better?

Yes, the cats could be dogs. But these are boss cats so I’m going to let that slip on this occasion.

The rest of the evening kind of merges into an indistinct, very comfortable blur. The various instruments and pieces of hardware Ivan has around the place suggests the chap really knows his stuff. We don’t need to get particularly deep into conversation for that to be proven. You know how when some folks speak, they inspire an odd mix of confidence and peace? There’s a very clear, demonstrable understanding of whatever subject matter you’re discussing, but there’s no ego about it. No attempt to highlight their own intelligence, just engage in conversation and be very effective in doing so.

I know what I’m getting at but the cats keep nibbling my toes and the wine is kicking in. I probably came across as a bit of a vegetable.

Conversation, food and drink consumption continues well into the night. I don’t remember falling asleep, but it defintely happens.

So far, this is a good place to be. 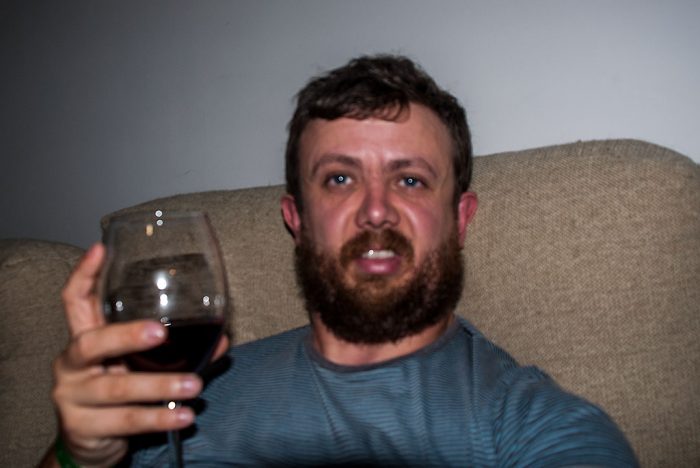