Technically, everything is now in place for us to start building hyperreality games of our own. Because technically doesn’t necessarily need to encompass talent.

It’s easy at this point, to let your mind get carried away with incredible, needlessly complex ideas. Ideas that sound great in theory, but unlikely to be any good in practice. That’s assuming they even get that far.
Technically, everything is now in place for us to start building hyperreality games of our own. Because technically doesn’t necessarily need to encompass talent.

It’s easy at this point, to let your mind get carried away with incredible, needlessly complex ideas. Ideas that sound great in theory, but unlikely to be any good in practice. That’s assuming they even get that far.

Designing a game for hyperreality

I come up with a list of things I think this game needs to do. Keypoints it has to hit. It needs to work as both an enjoyable experience and a demonstration of what makes hyperreality games unique. Only doing one of these will mean it’s a failure. Doing neither will mean it’s a mega failure.

I immediately think of a football-based game, ie: kick an object at a goal. It’s simple, has a real-world counterpart, involves physical movement and the player can use their legs, rather than a controller.

It’s not going to change the world, but as far as my specifications are concerned, it does the job.

I scribbe down a rough visualisation of how the game should work. Tom Vine (Unreal Engine developer extraordinaire) needs to look at this and understand what the hell I’m talking about without asking.

I think he struggles to understand what I’m saying at the best of times. Either that or he just struggles to find the motivation to entertain my nonsense.

Either way, I chuck it infront of his face, to which he responds “Yes, this makes sense”. Not sure if he’s surprised or impressed. 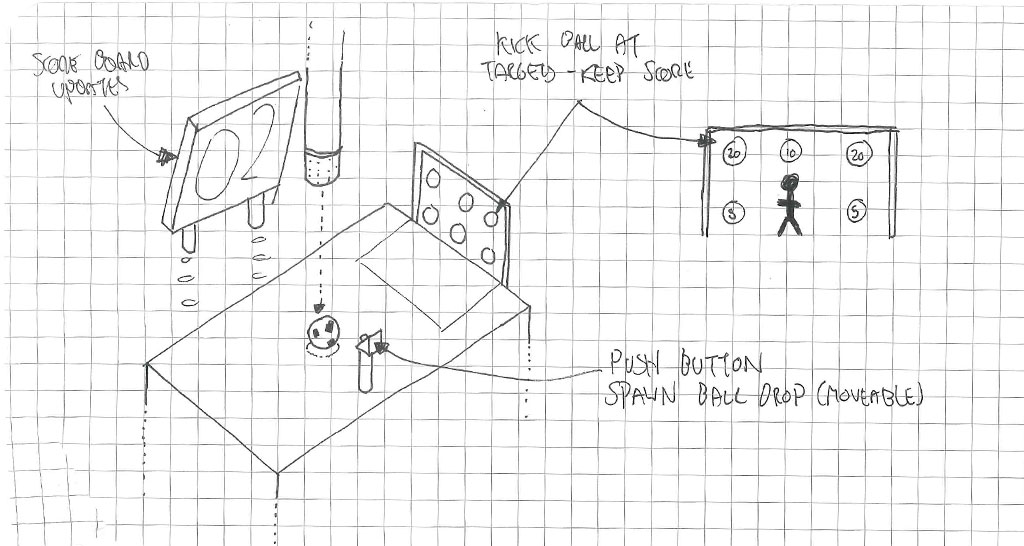 I can’t imagine Call of Duty’s (post Modern Warfare) design documents have ever been this comprehensive.

By Tom’s standards, this is the single greatest commendation of my skillset I’ve ever been blessed with.

He’s going to rough out the basic Blueprint in Unreal Engine 4, while I setup the motion capture stage.

It doesn’t take Tom at all long to get the fundamental Blueprint working in Unreal Engine 4.

We have a button which drops balls from above, a series of targets which reward different point amounts and a scoreboard. We’ve also got a pratt in a motion capture suit.

Kicking the balls works perfectly fine, but it’s incredibly difficult to control their direction or apply any lift.

It doesn’t matter how I approach kicking, nine out of ten times the balls just go in a straight line.

It’s literally the exact opposite of how I kick balls in real life.

I wonder if it’s because I’m unable to actually get under the ball itself. I haven’t checked our collison boxes so it’s completely possible that as far as the game is concerned, I’m always hitting the ball square on.

So maybe the problem is I’m just not getting underneath the ball. I suggest we add a cylinder, onto which the balls can sit when dropped from above. Rather than kick, we’ll try punching the balls directly from underneath. 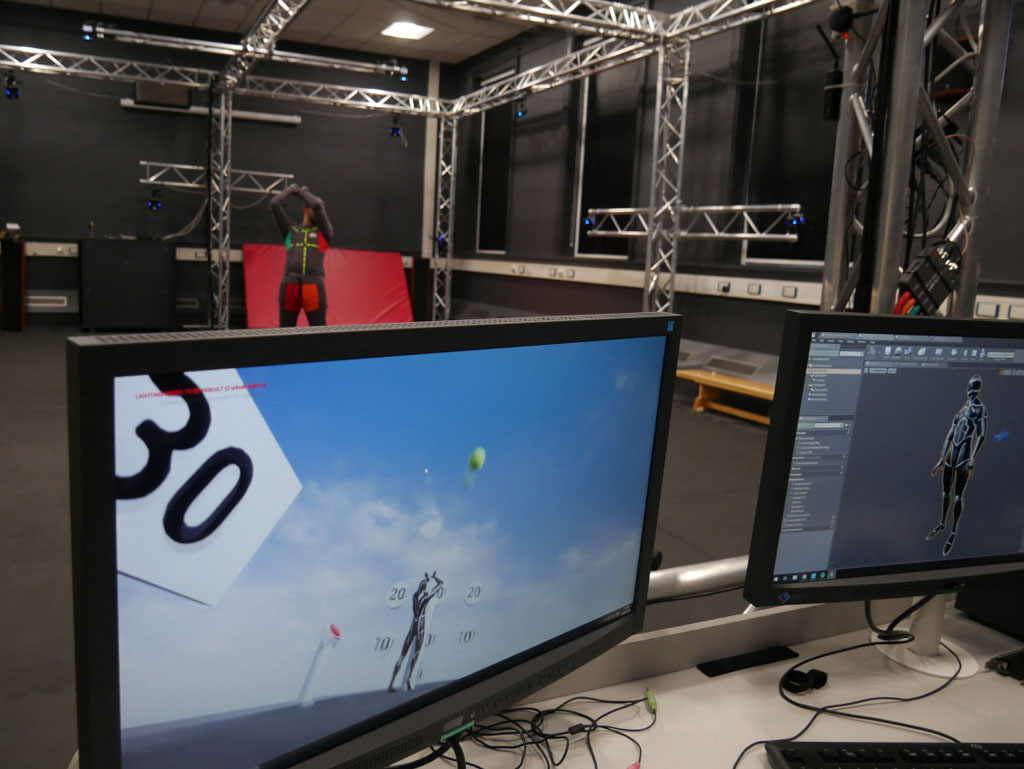 So we’re closer to Basketball than Football at the moment.

This works much better. It’s so much easier to get elevation from this sort of position.

I suggest we bring the scoreboard over to sit above the targets themselves. This will keep the player’s attention in a singular direction and reduce the amount of looking around they have to do.

The general experience feels far more streamlined this way. I’m no longer having to look around in several different directions to find the information I need. I hit a button, the ball drops, I take a shot and immediately know my score. 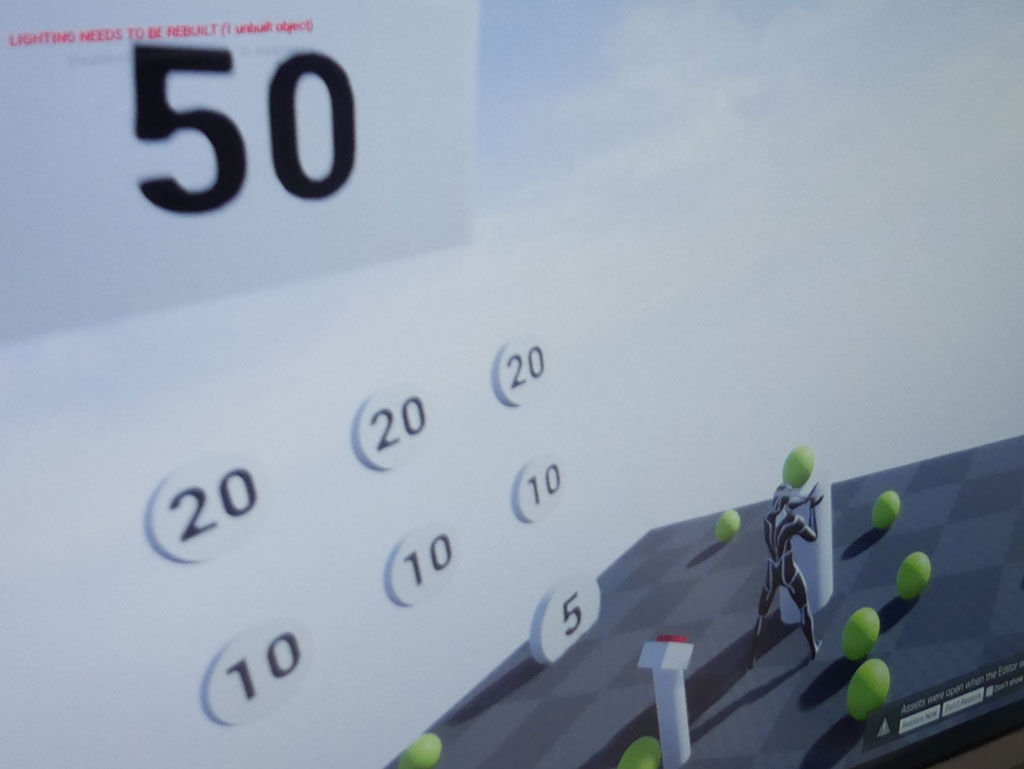 We start thinking of ways to streamline this further. The most clunky aspect at this point, is having to lean over to push the spawn button and then move back into position to hit the ball from.

Tom suggests we incorporate an actual object with which we could hit both the button and the ball with minimal need for moving around.

This would also incorporate the physical aspect we highlighted as being important in the beginning.

A few minutes later, we have a working stick in the game: 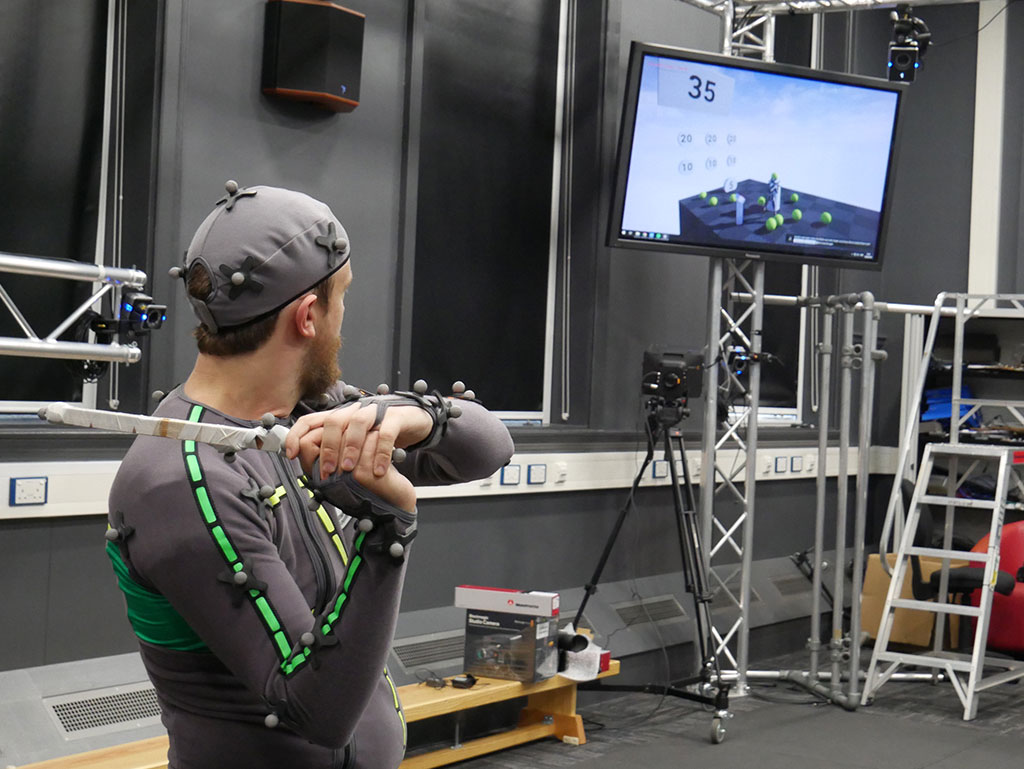 It actually takes more tweaking than any other part of the game so far.

Basically, the hit box which controls the spawner button going up and down, goes a bit mental. It responds to the stick entering, exiting and being within its collision space. One moment we have a ton of balls, then none, then just a couple?

It’s not that big a deal though and really doesn’t take Tom long to fix. Since it’s the first thing resembling a ‘bug’ however, I thought it worth mentioning.

Once that’s fixed, the whole ‘loop’ feels much nicer. Although the interaction needs work, so too does the sense of feedback. Because there isn’t any.

Sure, we can’t use physical balls, but we can tweak how the digital balls physically respond in their environment.

I ask Tom if we can set the balls to destructible.

A couple of seconds later, we have balls which explode into fragments when colliding with the targets. Tom also comes and tests swinging the stick himself, to better refine the motion/control in our Blueprints. 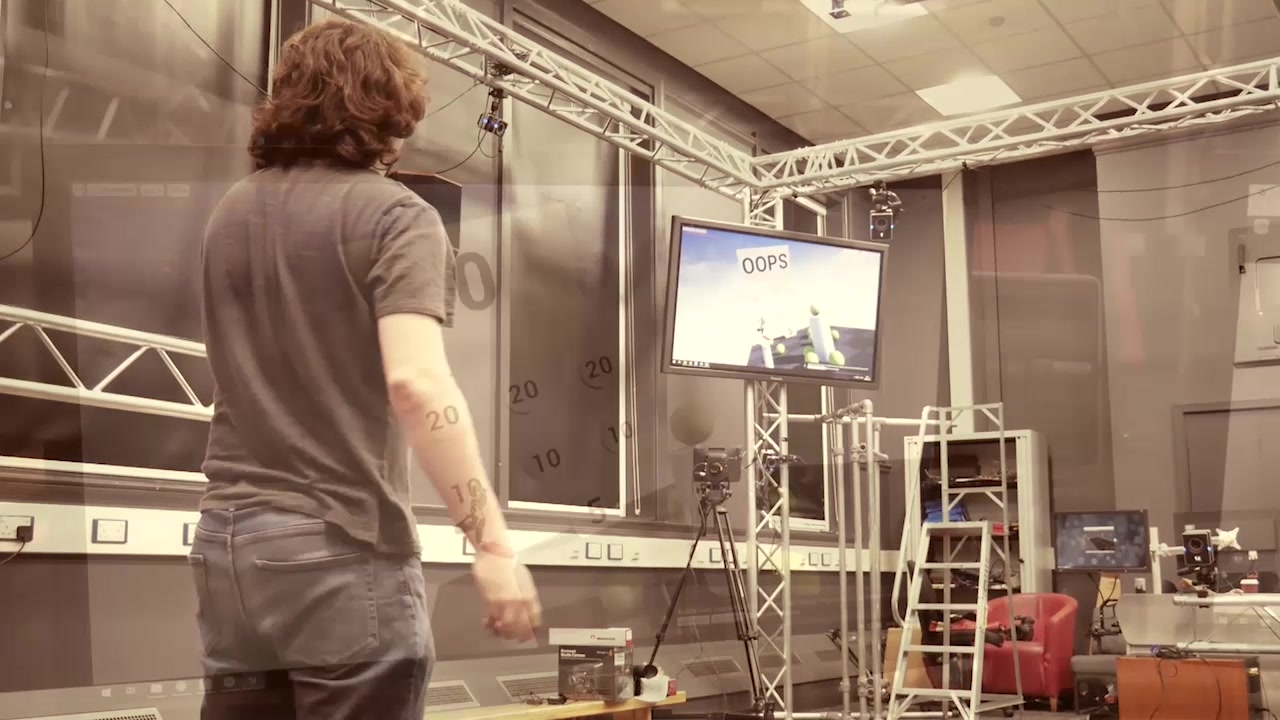 Tom nailing the living hell out of our new destructible balls.

I’m surprised by how much of an effect this has on the feel of the game. It just makes the whole interaction far more visceral and you definitely get a stronger sense of having accomplished something when you hit a target.

Now that I’m a bit more comfortable with movement and we’ve refined the controls slightly, I fancy having a go at taking kicks again.

We tweak the ball size a little more and I consciously make a greater effort to kick from beneath the ball itself.

It’s still ropey, but I eventually get used to the approach and it’s not long until I’m able to consistently get the ball into the air: 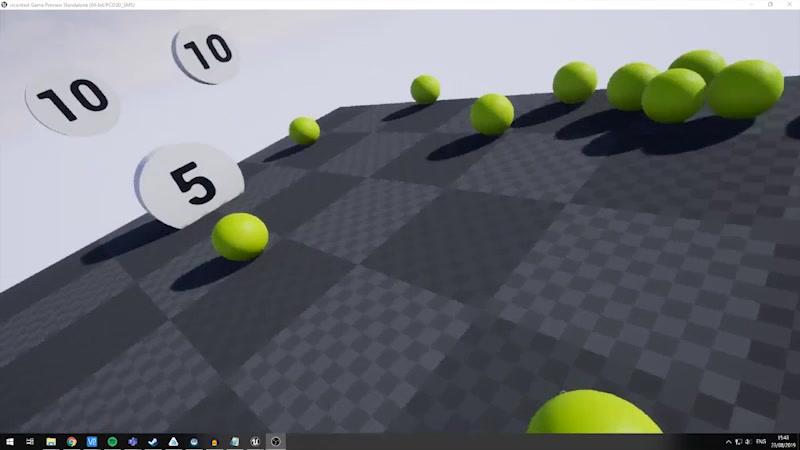 I’m exhausted, but the game’s turned out to be more fun than I expected. Sure, you could argue that what we have here is little more than a glorified Kinect game. The physical object makes a difference, but not at a fundamental level and we’ve not yet incorporated Virtual Reality.

But the main goal here was to build a foundation, a framework upon which we can start iterating more features. I’m satisfied this has been achieved.

Rather than rush ahead with another game concept, I plan to get this into a ‘releasable’ state.

We probably won’t release it, because Motion Capture stages aren’t something every PC owner has in their back room. Nevertheless, I’d like to execute the gameplay and aesthetics to a standard generally consistent with that of modern titles.