Most fins are recognisable because of a unique feature. Demon for example, had a massive hole in his. There was absolutely no mistaking this dude for any other shark when he approached the boat:

Demon – One of the most recognisable great white sharks to visit Gansbaai, South Africa

Others are recognisable due to your familiarity with the shark itself. Darwin doesn’t have a particularly iconic looking fin. But they made such a strong impression whenever seen at the boat, that you can’t help but associate all those characteristics with said fin:

Darwin – A great white shark recognisable more for their personality than dorsal fin.

Working through the dataset though, there was one fin which stood out mainly because of the frequency with which it was seen.

20080625-1 (we identify individual sharks by the date upon which they were first seen) appeared in 2008, 2009 and 2011. Whereas great white sharks like Slashfin would often return during specific time periods (ie: winter), this one didn’t seem too picky. In 2011 alone, they were seen in March, April, May, August and October.

There’s nothing especially recognisable about this fin. There’s the mega small pair of bumps right towards the top, but those aren’t exactly unique. Pretty much every imperfection and shape is of an ilk frequently seen on great white shark dorsal fins.

I even asked Oli and Alison whether they recognised/remembered the shark. “No” was the response in each case.

But this was probably the one shark I saw most frequently and over the longest period of time.

On one such day, I found myself saying outloud “Hello again, Spud”. I’ve no idea where the name came from. Maybe I was eating potatoes. Either way, it stuck.

You might consider that strange. I consider what followed to be stranger.

“I know you from your picture!”

Late 2012 arrived and I’d finally finished cataloging all the individual fins. We decided to celebrate by going out to sea and playing with… sorry, researching great white sharks.

Or, Oliver already had the trip planned and I decided this was a celebration. Maybe the two things are actually completely seperate. Ugh, my memory is awful.

Anyway, we didn’t get any sharks at our first anchor point and so moved a little closer to the island. Within an hour, our first shark arrived. 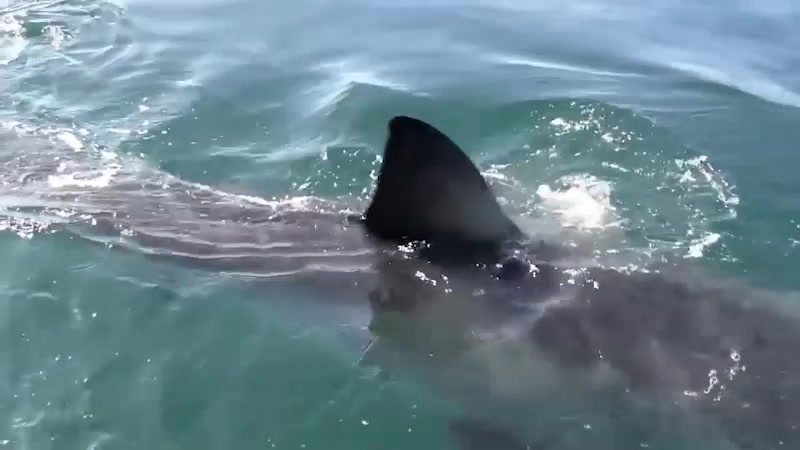 Spud graced us with their presence for ten glorious minutes and was the last/only time I saw them.

It’s hard to tell from video footage and indeed, when we got back to the office I checked the day’s photographs against Spud’s in Darwin.

It was them. We weren’t able to determine sex, but this was a decent sized animal who blessed us with a solid ten minutes of their presence.

Spud wasn’t especially active, either. They made plenty of passes towards the bait, but no really distinct lunges. While the direction of approach changed from time to time, there was never enough conviction to really identify this as an attempt on the bait.

Overall, they just seemed perfectly content with sharing our company and this is nothing out of the ordinary.

People often look at me utterly perplexed when I explain how the vast majority of the great white sharks we work with in South Africa, are mega chilled out. To quote shark scientist Enrico Gennari:

They’re not some incredible ‘Pac-man’ creature.

We didn’t share eachother’s company for long, but Spud represented many of the qualities I’ve come to admire in sharks the most. Powerful but graceful, capable but careful.

Never to be seen again

Spud isn’t the only great white shark who I’ve met after already seeing their fin in Darwin. But they’re probably the first and the timing was so uncanny that they’ve stuck in my mind ever since.

I’ve not seen Spud since and to be honest, I’m not sure I ever will. Quite a few of the sharks we worked with seemed to ‘disappear’ after so many years worth of appearances. Given how unstriking their dorsal fin is, it’s not like they’d stand out in a crowd either.

But to have seen their dorsal fin for so long and then to finally see them in the wild, was a real treat.

Having said that, seeing any great white shark in the wild is a treat.

This one just so happened to have a ridiculous name.