The grand opening was on Friday 6th September and it enjoyed a metric fudge ton of people through the door.

It’s almost like the BCB is a big thing.

You should definitely come see it.

Allow me but a few moments to convince you why. But first, here’s a picture of some wine someone spilled on my VR crash mats.

Definitely not my pee.

Last week’s journal entry on the subject shared some information on the digital installation worked on by myself, Rich Harper and Tom Vine. Because we’re cool.

One thing I didn’t mention is Rich’s Automated Photogrammetry Setup.

Or as I like to call it, RAPS. He should definitely call it that.

He’s basically used his technical wizardry to setup a turntable upon which a object to be digitally reconstructed (in this case, some twelve billion ceramic moulds) is placed. This turntable is automated via computer jazz to rotate at gradual intervals, with a camera synchronised to take a photograph at each.

This will enable him to create a digital archive of these seemingly innumerable one-of-a-kind pieces over the next six weeks. Perhaps not all, but at least a couple. 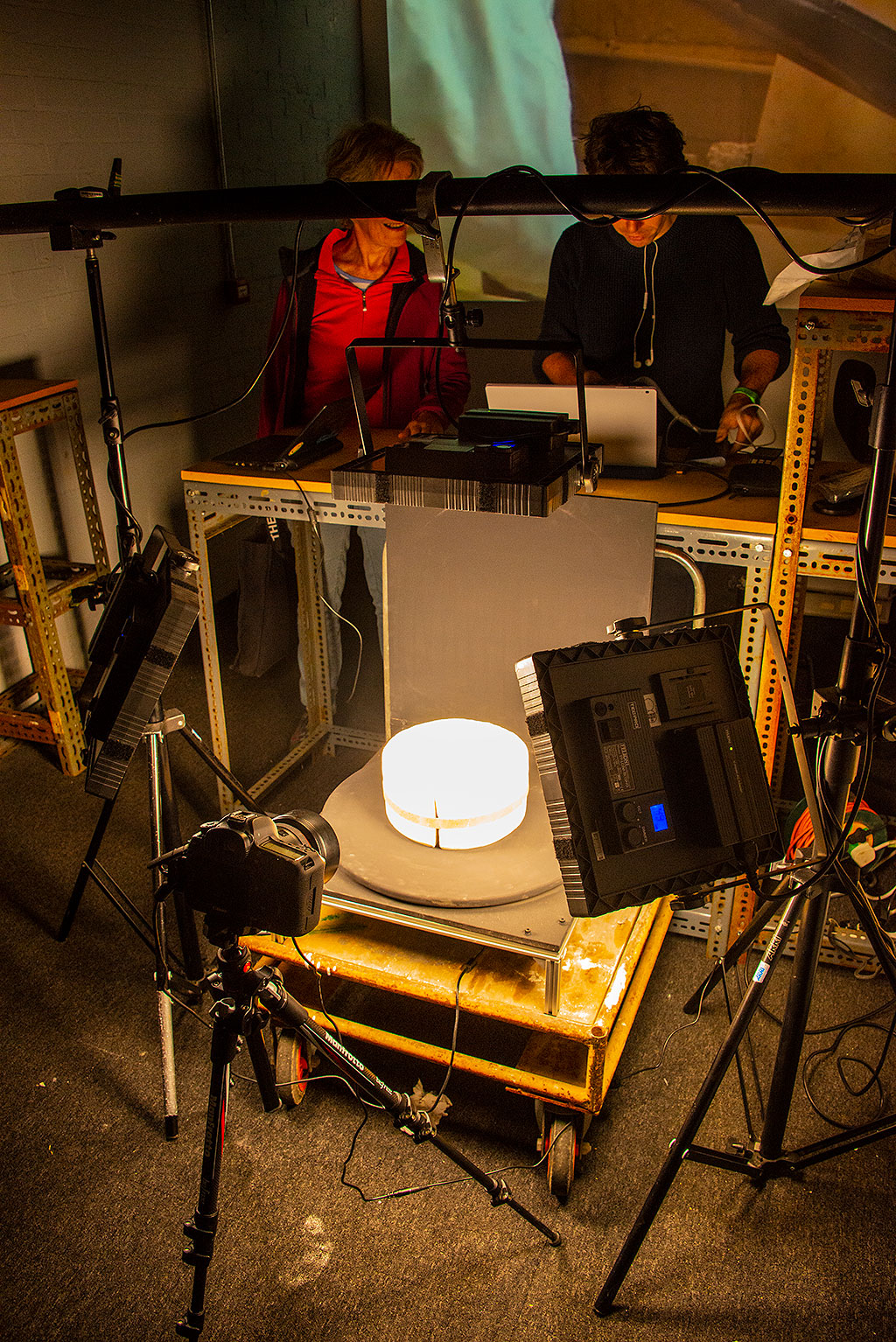 This photo is terrible because I didn’t take the time to get the camera and lighting settings right. Kids, don’t be like me. Get your settings right.

Two of the biggest challenges with close range photogrammetry (for inpatient, forgetful people such as myself, at least), involve getting consistently good photos with the correct amount of coverage and the excessive time it takes to do so. Rich’s solution alleviates each of these issues to a large extent and I’m mega excited to see how his PhD progresses.

This installation has since been moved over to the actual Museum area at Spode. So if you do find time to stop by, please do come and see this.

As mentioned in my previous journal entry, we created a Virtual Reality exploration of one of Spode’s restricted areas. This is powered by our custom solution for navigation and interaction in VR, Discover.

More on that at a later date. I really, really hope.

We are one of a very small number of digitally based projects at the BCB, surrounded by countless physical pieces. As such, I wasn’t entirely sure how well we’d go down.

Thankfully – really, really well. Not that you’d believe it from my face: 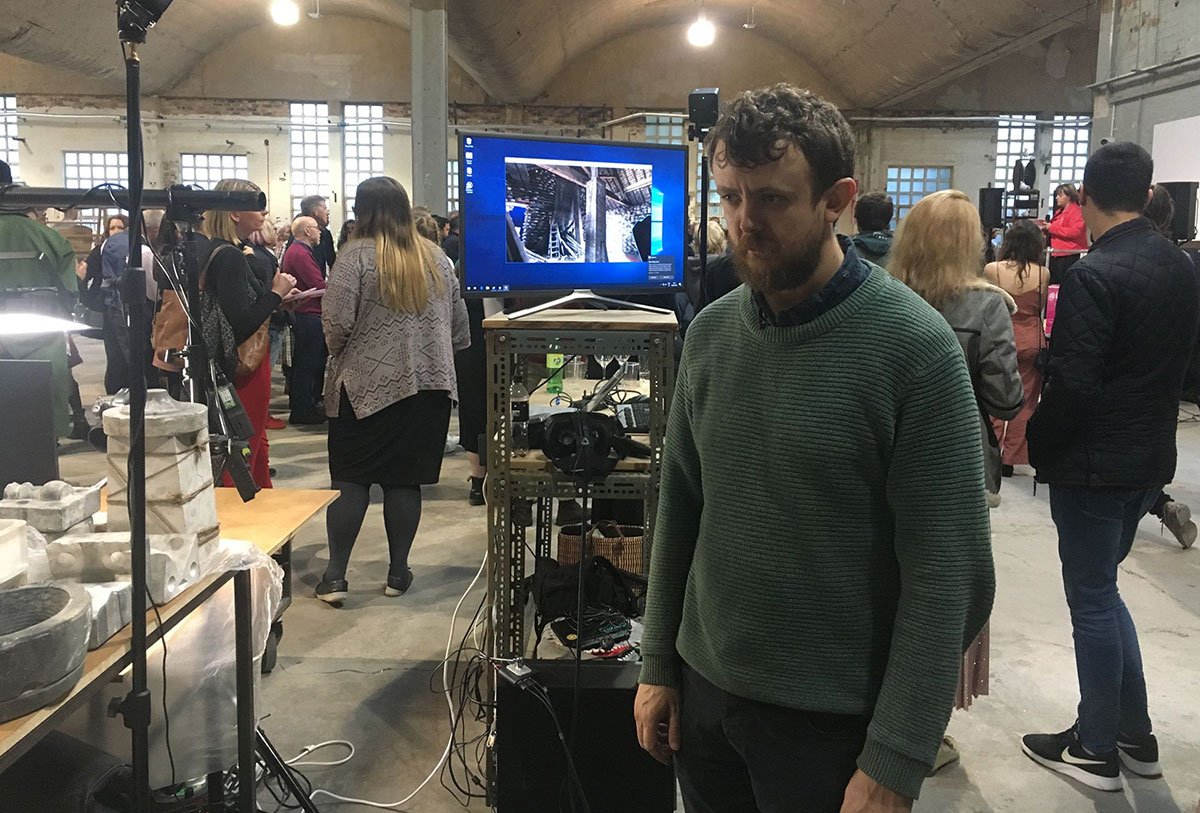 This pretty much encapsulates one of my two emotional responses to engaging with the general public.

This is one of the largest ‘live tests’ we’ve done of the Discover system and it was exciting to see just how easily people adapted to the tools.

More importantly, those familiar with the history of Spode responded positively to accessing areas restricted from the public.

The whole idea behind Discover is that we bring places and objects to people who might otherwise never be able to experience them. This was an opportunity to test our approach with a completely new audience and some of the feedback we got will prove to be invaluable.

That’s enough self-promotion for now. The important thing is, people dug it.

The second of our two installations, is a touch screen that allows people to explore several restricted areas at Spode (including that featured in our VR demo). We took 360 degree photographs at several key points in each room and rolled them into a simple HTML solution accessible via any modern web browser. Including Microsoft Edge.

There are plans to roll this out across more museums. I’ll share an update on here should that come to pass. 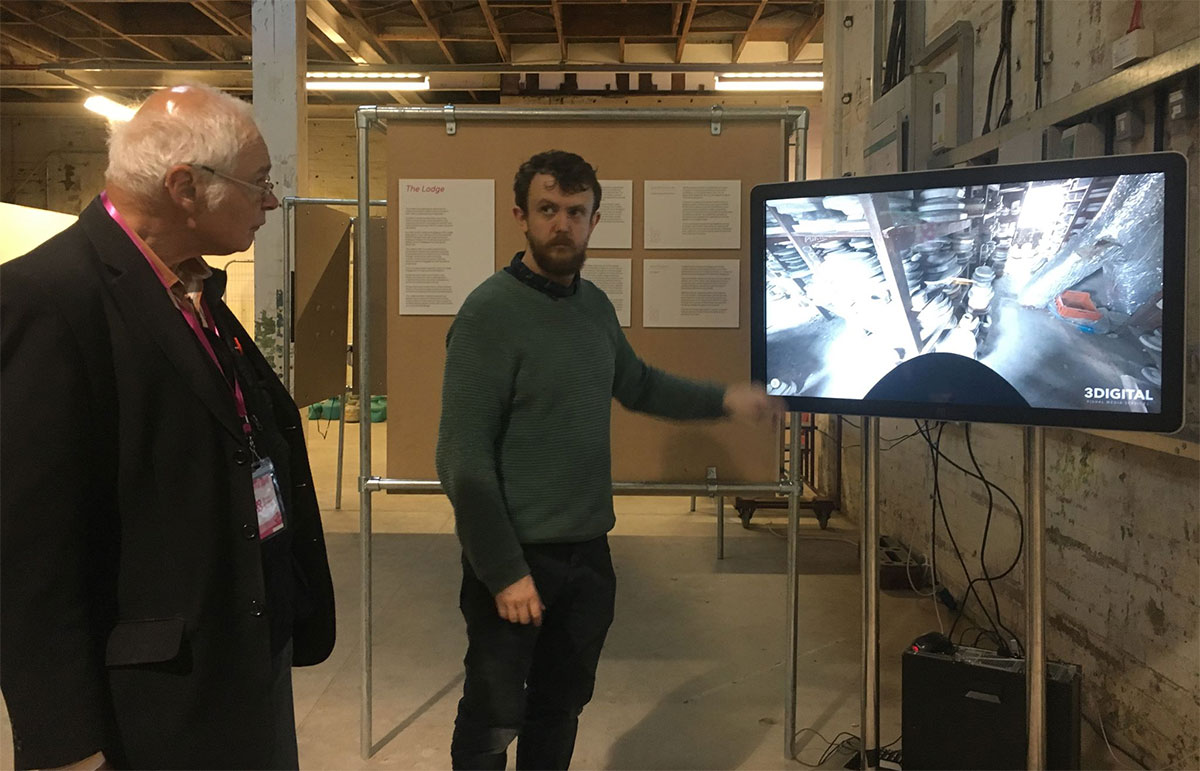 This pretty much encapsulates the second of my two emotional responses to engaging with the general public.

A celebration of art and design

So yeah, our stuff is cool and all, but it’s worth visiting the BCB just to experience the physical pieces on show.

Paintings, scupltures, 3D prints, films, photography, really strange mechanical things – the range of work is far beyond what I was expecting.

Sure, that could just be because I’m incredibly ignorant. But even taking that into account, I think most people would be hard pressed not to be impressed by some of the artistry showcased.

My photographs don’t even begin to capture the sheer volume and diversity of work at the BCB. If you’ve even a remote interest in the history of Spode or ceramics in general, paying the exhibition a visit would most certainly be worth your time. Did I mention it’s free, too? Well it is. So now you have literally no excuse.

It’s open until 13th October and can be visited at:

Rich and I will be overseeing the Virtual Reality installation and Automated Photogrammetry rig at weekends. If you’re especially interested in either and would like to speak to us in about them in more detail, we’d only be happy to discuss further.

I mean, speaking to people isn’t really my strong suit. I’ll do my best to raise a mumble. No promises.

Thanks again to Rich for bossing shiz, Prof. Neil Brownsword for inviting us to be part of it, Robyn for the embarrasing photos of your’s truly, the BCB (for obvious reasons) and all the artists who contributed their incredible work.

Come and see it. I promise I’ll shut up about it if you do.