Yeah well, they do.

We proved it, incase you were unsure.

My opening paragraph massively over-plays my involvement with this study. So just to be clear, I’ve not co-authored this nor had any direct input on the publication itself. I have been logging and analysing the footage from the same dataset that this study based on. Hopefully, we’ll be seeing a few more publications using this data over the next year or so.

I also assisted with the shark tagging process. I mainly chummed for sharks and kept the crew in good spirits with my incredible humour. Here’s Oliver, myself (cropped, of course), Taylor Chapple and Sal Jorgensen, camera tagging great white sharks a few years back:

Finally, I also produced the promotional artwork for this study. Because as we all know, that’s kinda my thing.

More on that later.

What the study shows

Summarising with a quote directly from Oli:

“White sharks made repeated and extended visits to kelp forest areas and significantly increased activity and turning rates when there”.

You might be thinking “Big shit mate, I always assumed sharks did that, who gives a toss?”, in which case – honestly, why are you even here?

But great white sharks swimming through kelp hasn’t always been considered an absolute fact, given how difficult such a thing is to document and therefore prove. Thanks to the CATS tags we attached to their fins however, evidence of such has been obtained:

I don’t get how people can look at stuff like this and not lose their minds. That’s (almost) a first person perspective of a real, living great white shark just doing its thing. It has a mind of its own and a sequence of intensions it’s pursuing. You’re sharing in the life of an animal over ten to twelve hundred million years old.

Like looking through old photographs with your nan. Which I don’t do anymore because she won’t speak to me. Moving on.

What’s more, is that great white sharks weren’t seeming to just ‘wander into’ these areas. They were pursuing, following and actively hunting seals.

During my time in Gansbaai on both Cage Diving boats and as a research assistant, we’d often see seals using the kelp when we suspected or knew sharks were nearby. We’d often debate whether such behaviour was instinctive, or part of an active avoidance strategy. Did environmental factors such as kelp forests even impact the way sharks hunted seals? 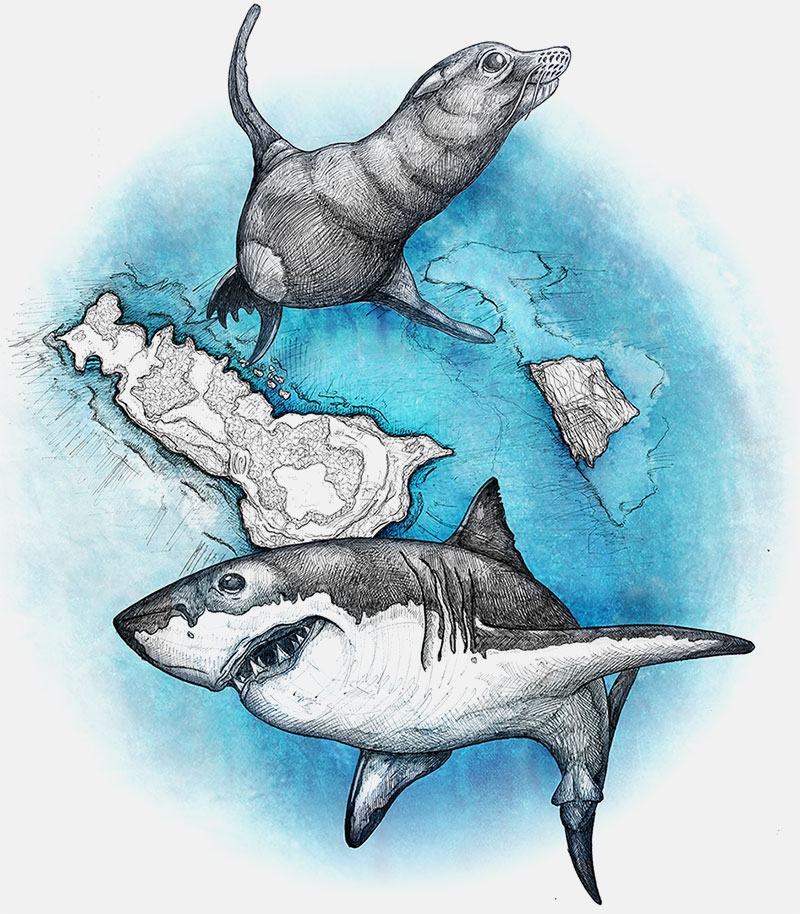 This dynamic between predator and prey is the subject of friend Michelle Wcisel’s Masters; The effects of white shark presence on the behaviour of Cape fur seals at Geyser Rock, Gansbaai, South Africa. She compared the relationship between these species in Gansbaai to the same in False Bay. That area doesn’t have nearly the same amount of kelp or landscape diversity but is nevertheless, known world-wide as a hot spot for great white shark predations on seals.

The differences were indeed evident. I strongly advise you read Michelle’s Paper if you wish to know more.

Why this a big deal

You might not consider this as being right up there with cracking the white shark genome. Nevertheless, every single thing we learn and document about white sharks, helps to unravel the mysteries of their behaviour.

Fundamentally – this highlights that kelp isn’t necessarily a guaranteed safe zone. That’s a problem for seals, but it’s also potentially a problem for humans.

Or at the very least, humans with a vested interest in kelp being a successful natural deterrent.

It raises significant questions as to the long term success and applicability of Shark Barriers which are designed to mimic kelp, as a means of dissuading sharks from entering certain areas.

Results from such a solution were Reported on earlier this year, stating that “Members of the [research] team saw how seals chased by sharks swam into kelp and how the sharks time and time again turned away, not entering the kelp areas” – JBayNews.com. In light of this newly published evidence demonstrating sharks doing exactly that, you have to wonder what else factors into their decision making.

None of these are questions that can be wrapped up in a couple of observations. Still, this is a strong example as to how relatively small discoveries such as these, can open the floodgates to an entire ocean of further questions. I ask that you forgive the lazy metaphor.

As was the case with Future Research Directions on the “Elusive” White Shark which was published back in December 2018, I was asked to produce some promotional artwork for this study. I wrote up a fairly detailed summary of how I approached the infographics and a tutorial based on the front cover for that one. I’m probably not going to get round to doing the same for this one, so here’s the jist of it.

I always make a conscious effort to avoid repeating myself with each piece of artwork. I might stick to fundamental themes, but I vary the execution. The same is true of Krupskaya’s artwork. There are consistent elements, but each piece has an identity in its own right.

Initially, I had this idea of seeing a kelp forest from the great white shark’s point of view, but the figures would do that, so no. This lead to ‘maybe cut the sharp of the shark out of the kelp?’, but that just seemed a bit ‘blegh’ during initial sketches. I then inverted this idea and thought:

‘What about a shark made from kelp?’

This was a more abstract way of visualising the findings of the paper and opened the door to some interesting visuals.

I did a couple of sample sketches and watercolours. They were inoffensive, but missing something fundamental. One of my problems is I often get frustrated if I can’t see the essence or direction of an idea straight away. Sometimes this needs reigning in, as it can take some time spent purely conceptualising before that essence becomes clear. Other times, it can be quite helpful, as it informs me straight away that ‘something isn’t quite right’.

I decided, somewhat arbirtrarily you might argue, that my approach was too organic. It was too closely related to subject matter and therefore, didn’t really suit the more abstract, dramatic themes of the execution.

In other words – this would look much cooler if it was done as a metal sculpture.

I modelled individual leaves of metallic kelp and then manipulated these into the shape of a great white shark. 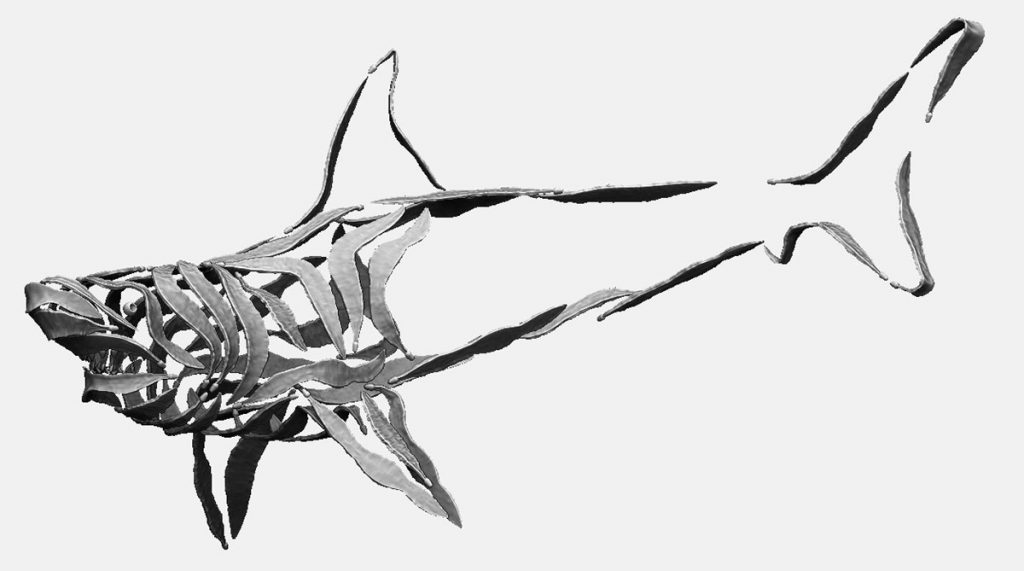 I could then render this model from various angles, in a fraction of the time it’d take to draw the same.

In terms of mood and tone, I felt the style of this lent itself to a more dramatic approach in presentation, than some of my previous pieces.

Furthermore, I thought about some of the banners, posters and leaflets I saw growing up, when Museums would unveil a new exhibit. There was always a very distinct sense of style that gave the subjects a sense of life outside the Museum itself. It felt like you were being invited into a world, rather than shown extracts from one.

Anyway, the long and short of it is that these principles converged on the following series of images: 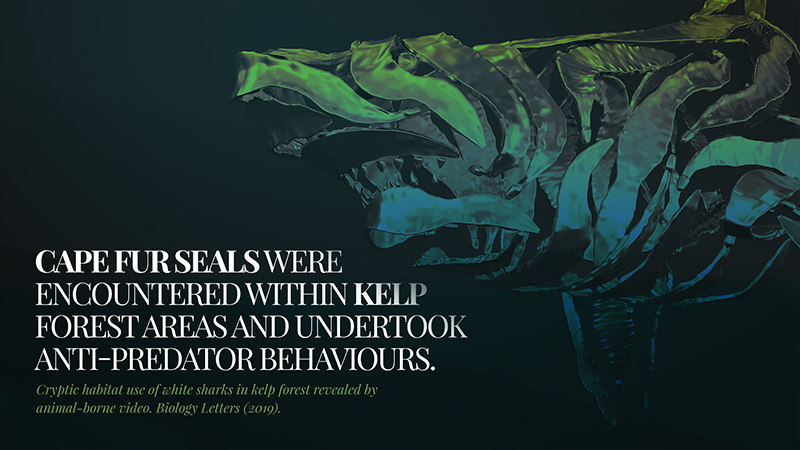 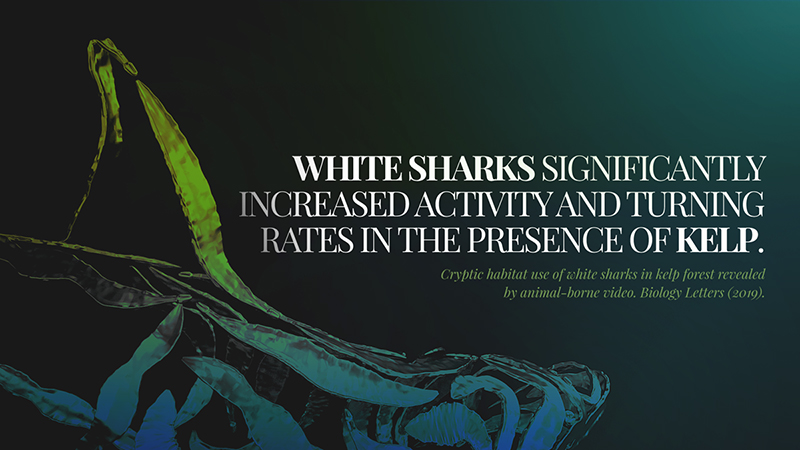 If you want to see the full series of images, please follow Oliver Jewell on Twitter as he will be sharing them over the next week or so.

Like I say, I’m hoping that more studies will be published as a result of the video data we featured in this one.

I sat through countless hours of footage of various sharks in both South Africa and California. The vast majority is painfully boring, because it’s just great white sharks doing what they do – swimming in the endless blue abyss. But their behaviour and interactions during these periods are just as important to log as those which are more ‘entertaining’.

But being able to share indisputable, factual evidence that great white sharks do something that could previously only be theorised, is exciting in itself. The more we learn about great white sharks, the more fucking amazing they turn out to be.