Because not only are white sharks absolute bad asses who generally have no interest in killing humans, but they’re actively helping us battle one of the most terrible diseases on the planet. We’re welcome!

So by ‘actively’, obviously I don’t mean literally. I’m not suggesting that we’ve had a chat with white shark representatives. Certainly not one which culminated in the agreement of a two-pronged strategy of attack on mankind’s least favourite disease (sorry, AIDs).

Can you imagine that conversation?

“Yeah, so, if you and your toothy mates help us beat seven shades of shit out of cancer, then in return… we’ll… er… stop both mutilating you for a few bowls of soup AND villifying you in the media?”.

Can’t say fairer than that. Evidently better than anything Theresa May could negotiate.

See that? Topical, witty and a cheap shot at the Tories. I’m getting the hang of this whole ‘journalism’ thing.

Decoding the white shark genome… or something

In all seriousness, this is pretty cool news.

A paper published on February 19th 2019, delves into the DNA of great white sharks. Potentially revealing answers as to how we might fight diseases in humans.

‘White shark genome reveals ancient elasmobranch adaptations associated with wound healing and the maintenance of genome stability’ (or WSGRAEAAWWHATMOGS, as I like to call it. Those last eight characters crack me up!) essentially unwraps the white shark genome.

In short, it’s revealed that not only is the white shark genome one and a half times the size of ours, but specific DNA sequences therein indicate molecular adaptation. These relate to repair and damage respones among others. If I understand the science correctly (which is a masive if), this basically means that the areas of white shark DNA that determine how it responds to and overcomes physical damage, aren’t (massively) effected by the accumulation of said damage. The genome’s integrity is maintained, rather than compromised. 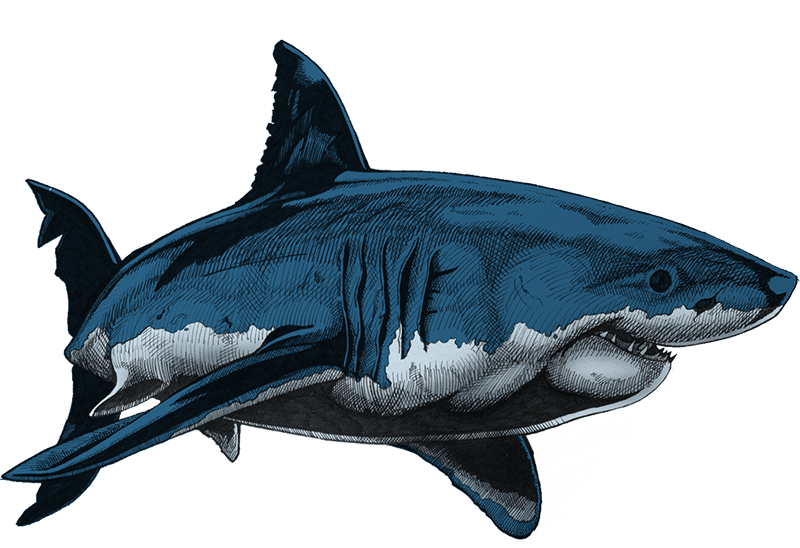 This is where humans struggle and suffer, comparatively. The instability of our own DNA makes us susceptible to diseases, especially those related to age, such as cancer.

But the millions of years these (fucking amazing) animals have been swimming in our oceans, has afforded them an awfully long time to develop ways around this. Potentially, some of those developments could be applied to how we approach future cures:

“Decoding the white shark genome is providing science with a new set of keys to unlock lingering mysteries about these feared and misunderstood predators — why sharks have thrived for some 500 million years, longer than almost any vertebrate on earth”.

This quote is from Dr. Salvador Jorgensen, of Monterey Bay Aquarium who co-authored the study. There are other quotes, but since I’ve worked with this chap on White Shark Kinematics and he’s always been ridiculously pleasant, I figured that’d be the one to go with.

The publication goes into a lot more detail than that and the one thing I’ve seen emphasised by all news outlets covering this story, is that this is very much the tip of the iceberg. There’s a lot more research to be done and discoveries to be made. But even this early stage, has unveiled just how important these (again, fucking amazing) animals might be.

Read the full publication at PNAS.

Yeah, but sharks don’t get cancer?

The notion that sharks, even great white sharks (aka the best sharks) are immune to cancer is a myth. A lot of folks are surprised when I tell them this (all two people per year), but the science has been known for ages.

The most indisputable evidence dispelling this myth (to my knowledge), comes from a pair of photographs taken in 2013:

Dr Rachel Robbins of The Fox Shark Research Foundation, co-authored the very study featuring these images. The paper discusses and analyses evidence of wound healing in white sharks and a few other species. Though fairly shocking, I do find these quite incredible images to look at. An absolutely massive tumor and they keep on smiling.

These animals just do not give a shit.

So yes, sharks can and do suffer from cancer. At the very least, this paper has contributed to a growing pool of knowledge and evidence surrounding the occurence of the disease.

The full publication is available from the journal of fish diseases.

The Fox Shark Research Foundation by the way, was established by Rodney Fox of Adelaide, Australia. You might not know the name, but if you’ve ever looked into ‘shark attacks’ then you’ve likely seen the images of the injuries he survived at the hands… well, jaws of a great white shark in 1963. 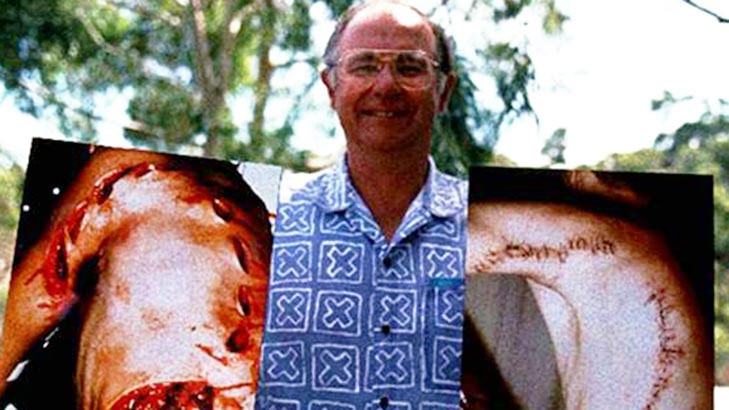 If anyone could be forgiven for thinking that sharks are dicks, it’s this guy. Yet, he’s become an internationally recognised voice for shark conservation.

Sharks are hard as fudge

Evidence as to the healing power of great white sharks is well documented. I lost count (usually happens after five anyway) of how many we’d see with scratches and wounds of varying size (seals are harder than they look!) which would heal almost as soon as they were noticed.

Long time friends and collaborators at The Dyer Island Conservation Trust (Alison Towner and Oliver Jewell, specifically) published a paper on such a wound back in 2012: Boat-Strike Wound Healing in Carcharadon carcharias.

In it, they documented the healing of a white shark that was struck by a boat. Hence the title.

Despite the severity of the wound, barely a scratch remained some twelve months after the incident.

What’s more interesting, is how little the shark’s behavior seemed to be effected by the injury. While a reduction in body mass was observed (likely because of the energy demands for the wound to heal), the general behavior of the animal was consistent with what we were/are used to seeing from perfectly healthy individuals.

Sure, this was essentially a brutal-looking flesh wound and had the spinal cord been severed, it’s unlikely the shark would’ve fared quite so well.

Nevertheless, it’s an impressive visual indicator that attests the to evolutionary miracle that these creatures are. I am going to repeat that – great white sharks, infact all sharks are evolutionary miracles and they’re fudging great. If you’ll pardon the pun.

Boat-Strike Wound Healing in Carcharadon carcharias can be read for free.

As amazing as all this is, the regeneration capacity of sharks is partially why the finning trade is widely considered such a cruel one. When a shark’s fins (which comprise up to 5% of the animal’s weight, I believe) are sliced off, the rest of the body is discarded.

The meat is of very little value compared to the fins and also requires much more storage space. Therefore the majority of the animal, which is still alive at this point, is surplus to requirement. Typically, it gets chucked back into the ocean. 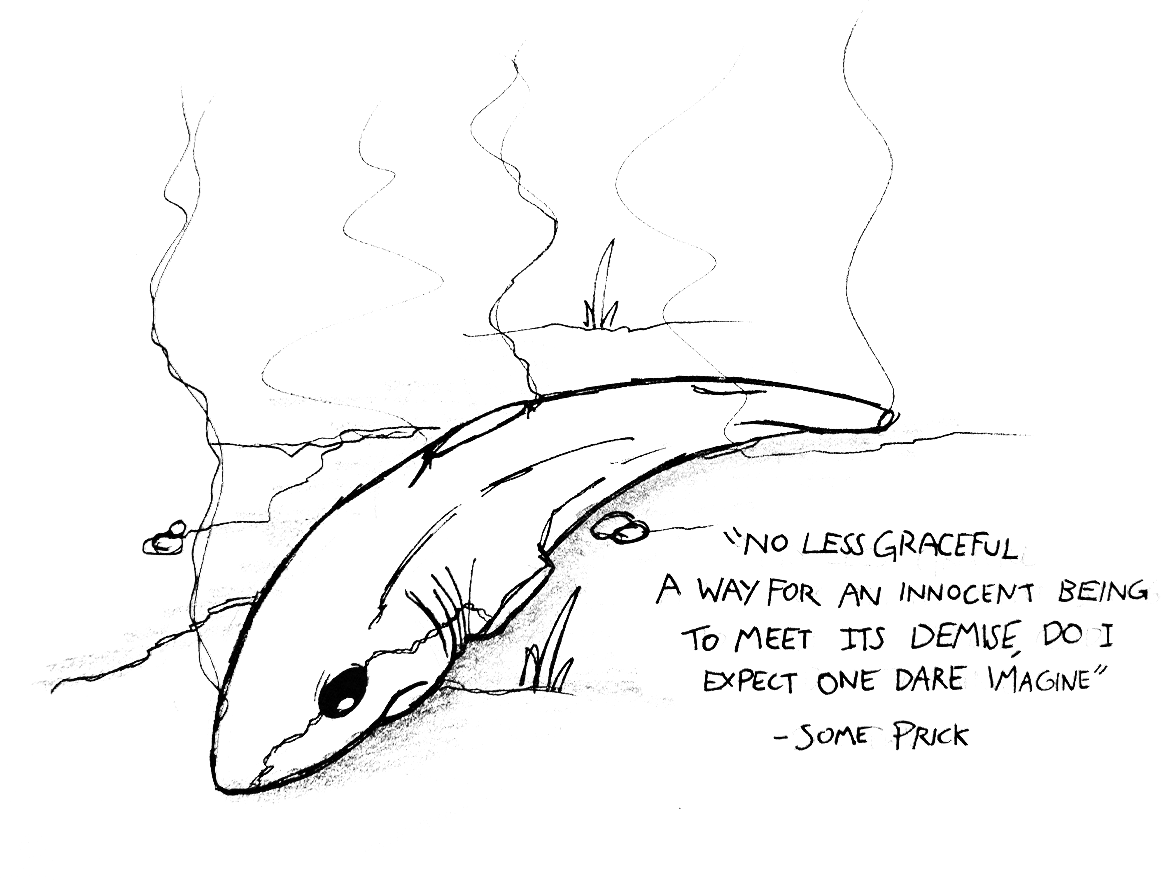 This is not a quick, painless death. The vast majority of shark species need move constantly for oxygen to be absorbed through their gills. When they’ve not moving, the animal slowly drowns to death.

I’ve not read up on what the average time requirement is for drowning sharks. This is mainly because as far as self-induced depression goes, Googling ‘SJW Fails’ is far more effective and I don’t have to think about sharks dying. Regardless, I expect that their healing qualities do very little to expediate such a bleak death.

So yeah, there’s always that to think about.

Because sharks are awesome

It’s not like any further evidence was needed, but I do think the fact that sharks may hold the key to obliterating cancer is a good one to add to the list.

There’s a ton of websites currently running stories on this, so please do Google that shit if you’re keen to learn more.

You should also check out the Marine Dynamics Academy newsroom. We’re often sharing cool sharky stuff our interns have been up to and the people are lovely.

Oh and my better half took the header photo. Check her shit out.