The project is a collaboration between 43 great white shark experts, some of whom are colleagues, some are friends. I won’t name who, to spare them the shame.

Their goal is to establish which research topics pertaining to white sharks, should be considered priorities. Subjects range from how the species might be effected by climate change, to the socio-economic benefits of white shark tourism.

Project lead Charlie Huveneers (an Associate Professor at Flinders University, South Australia), wanted some visuals producing for the study. He therefore asked the group for suggestions on people who might be able to produce an infographic for the results.

It turns out I might’ve been more successful at nailing the ‘folks who need people who can draw a bit and proper love sharks’ niche, after all. A couple of the researchers involved put my name forward and the rest is history.

If you want to skip my ramblings about making visual stuff, you can read the published paper FOR FREE here. Otherwise, please do continue.

The brief  was to show the level of support for each research topic, in the form of a percentage. These topics needed an accompanying visual piece and to be grouped according to general area (such as organismal biology). All this needed to work on a single side of A4 and of course, not look crap.

I suggested we start by working out the visual piece for each great white shark research topic, first. Worrying about style at this point too would only confuse things, particularly given how many people were involved with feedback.

I kept this as simple and rudimentary as possible.

Not just because I’m lazy, but to specifically keep our attention on whether the image effectively encapsulated what the research topic was about. I aimed for the most basic interpretation, so we could be sure my understand was correct, before running too far ahead.

These basic images came in the form of silhouettes representing the primary elements of the study. These were depicted atop a background circle, which could either be used as a unifying backdrop, or to represent the wider context. 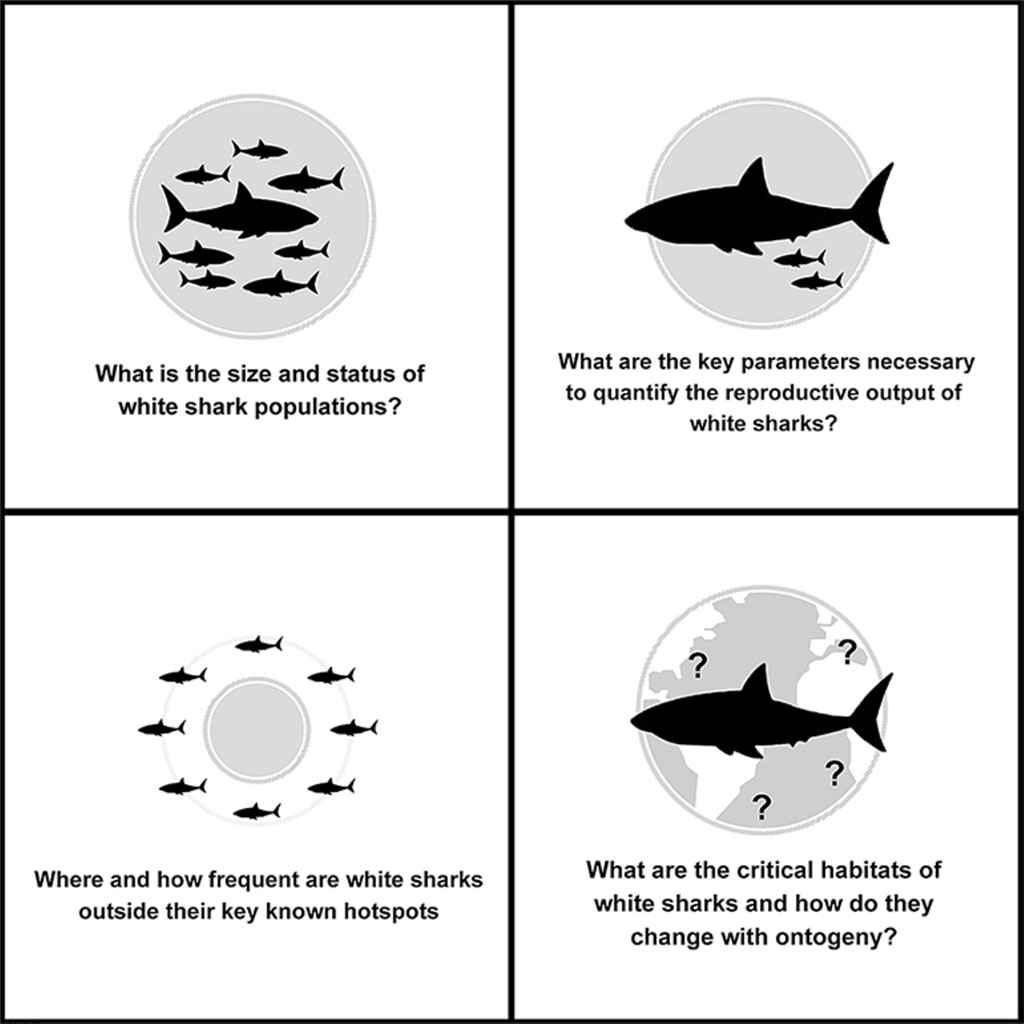 Initial concepts for the infographic

Some of these were surprisingly accurate, right off the bat. I am a genius and should be valued as such, I thought.

Some of them were totally, offensively off the mark to the point that you’d question my cognitive ability. I am moron and should be flayed, I thought.

Either way – the approach served its purpose. We were able to iterate quickly to get each of these images accurate and streamlined. The researchers’ feedback was also concise and well communicated. Because of all this, we managed to blast through the core visuals within a couple of days.

Once those were down, I knocked together three rough style guides, so we could determine the final aesthetic. These options comprised: very clinical and basic, arty farty and somewhere in between. 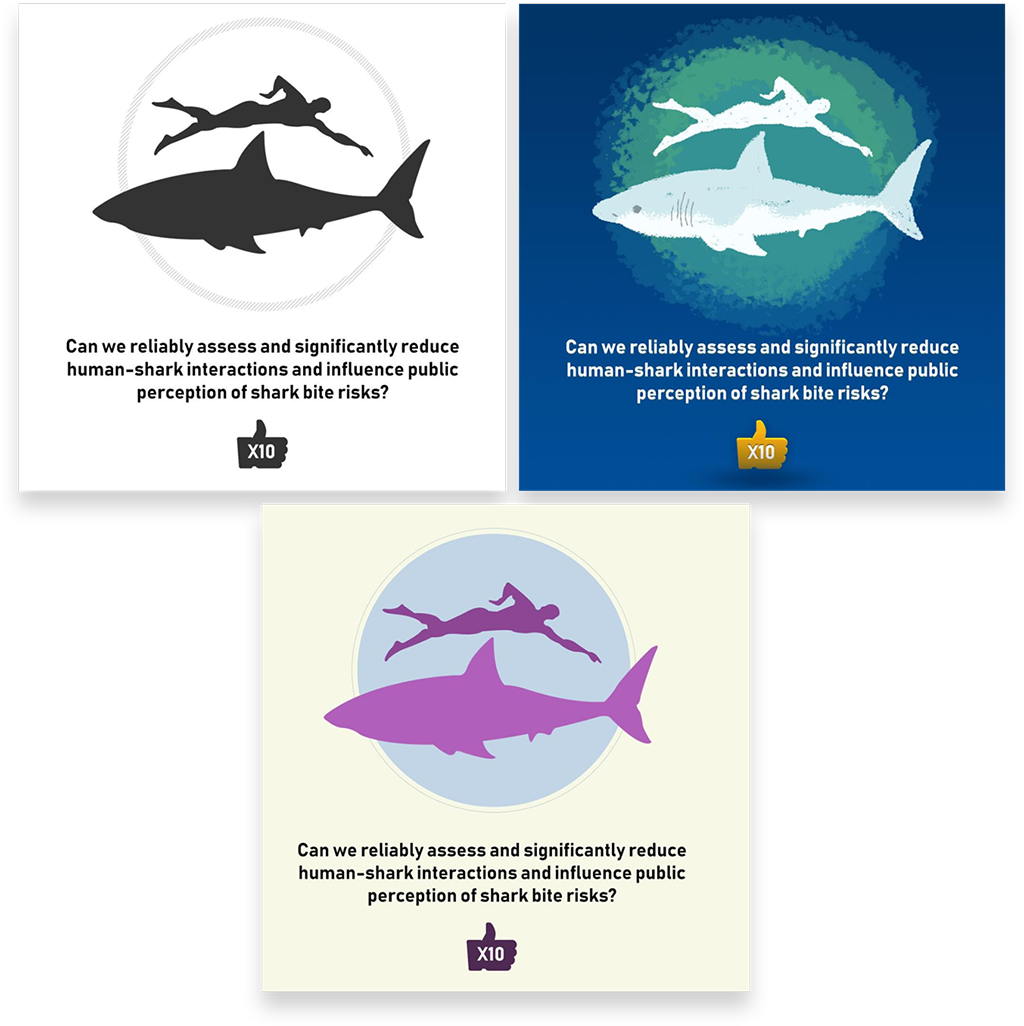 Charlie and I both agreed that the ‘somewhere in between’ option was the best. This was because the clarity would help in a page filled with visuals, while the use of colour kept it feeling a bit more appealing.

I chose a colour for each research group, with two shades of each to give a bit of variety and depth to the forms within. It was then simply a question of tweaking placement, sizing and typography to get it all fitting neatly on the page.

The result of which, is the following infographic: 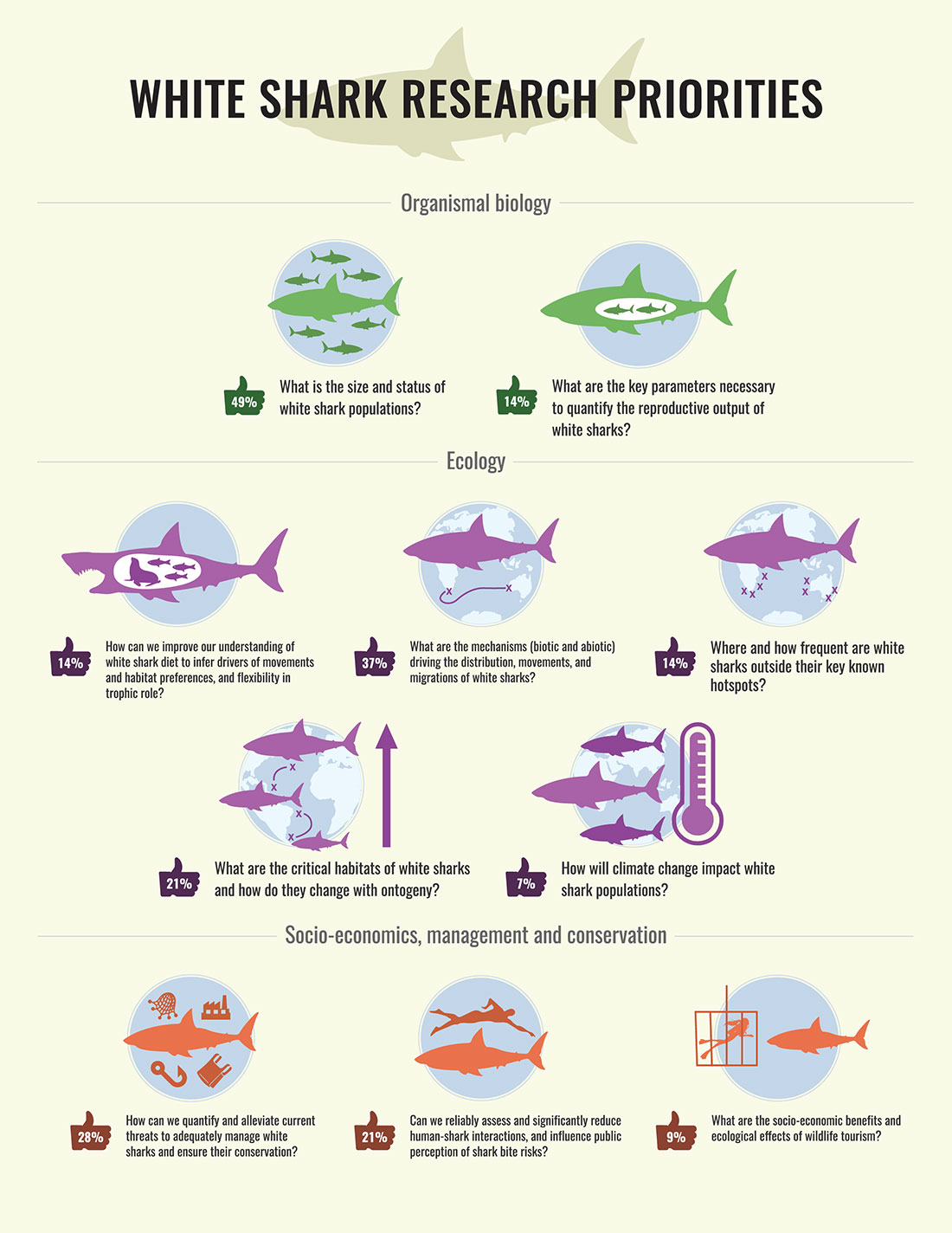 The infographic was sorted. I was happy, they were happy – boom!

I then offered to create a piece of artwork for the project, purely for promotional purposes.

Charlie was initially reluctant to accept, because he felt my generosity to date had already been sufficient and he didn’t want to take advantage.

This man is no normal client. Freelancers – savour people like these!

But I insisted, because I love drawing great white sharks and I wanted to contribute as much to the project as I possibly could.

Not because I’m lonely and desperately need to fill my time with as many distractions from the meaninglessness of existence as I can… not at all.

I felt that incorporating the research topics into this would only detract from the sharks themselves. I was given relatively free reign on this and instead decided to go for something colourful, vibrant and different to what I’d normally do.

I’m in the process of writing a tutorial, based on the work done for this final piece which will include far more detail on the process.

For now, here’s how that turned out: 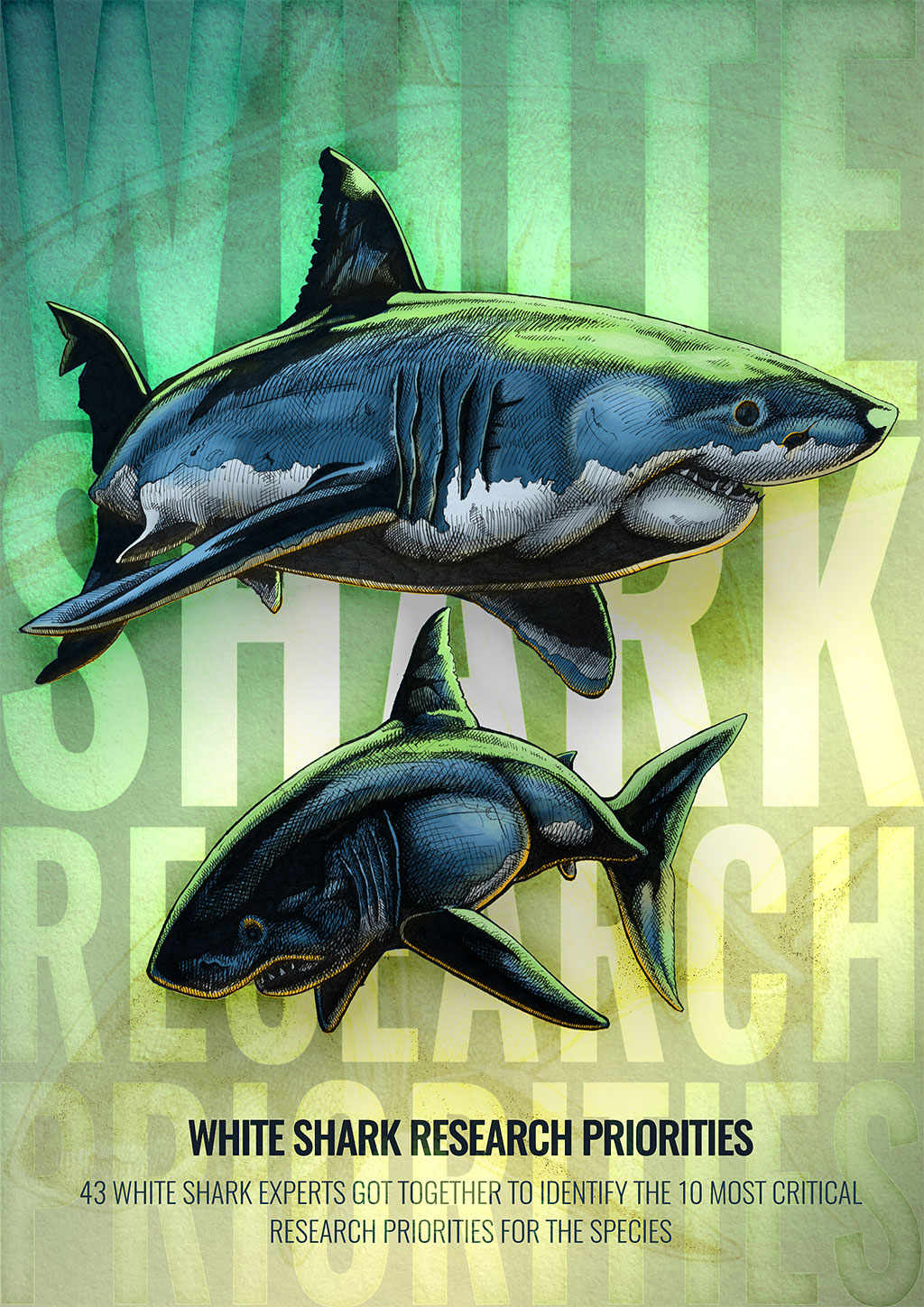 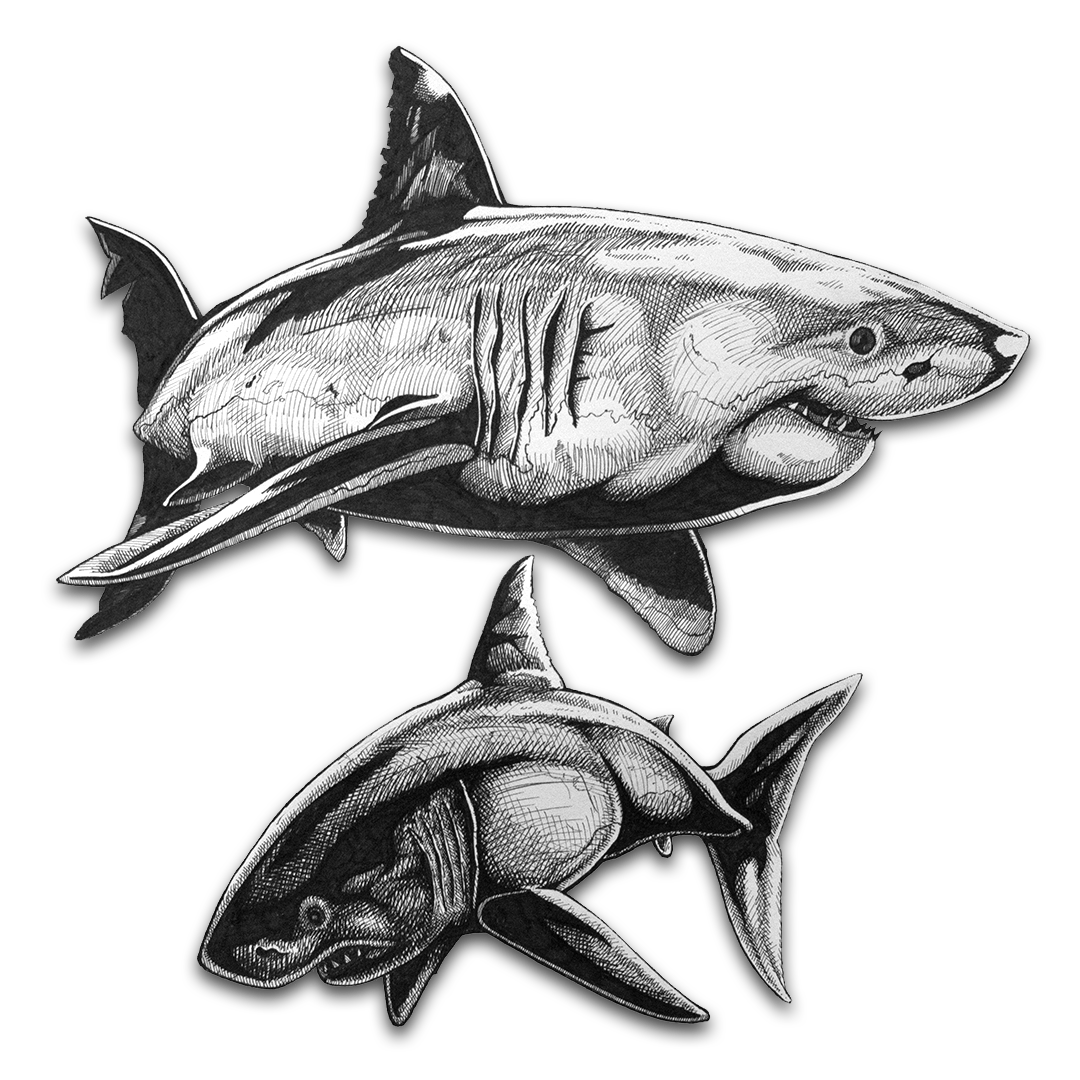 Thanks again to everyone involved with the project, especially those who suggested me as a collaborator. Mega appreciated.

You can read the publication here.

I will update this post with a link to the artwork development/pseudo-tutorial… eventually.

Great white sharks are the shit.