As we venture toward Nizhny Novgorod, little do we know that today’s events are going to involve getting lost in another forest and a bare penis. Yay.

Some final moments in Moscow

I awaken when Denis begins making preparations to leave. Goodbyes are shared, several denizens of the forest try to join us on our forthcoming journey. I’m in no mood for such jovial festivities, my eyes are blurry and there’s snot in my beard.

Last night was the bomb, I’d very much like the opportunity to do this again.

A quick bit of sight seeing around Red Square

Riley would really like to see Red Square so we make a slight detour. I’m glad we do, as it’s even more impressive than it was in 2015. 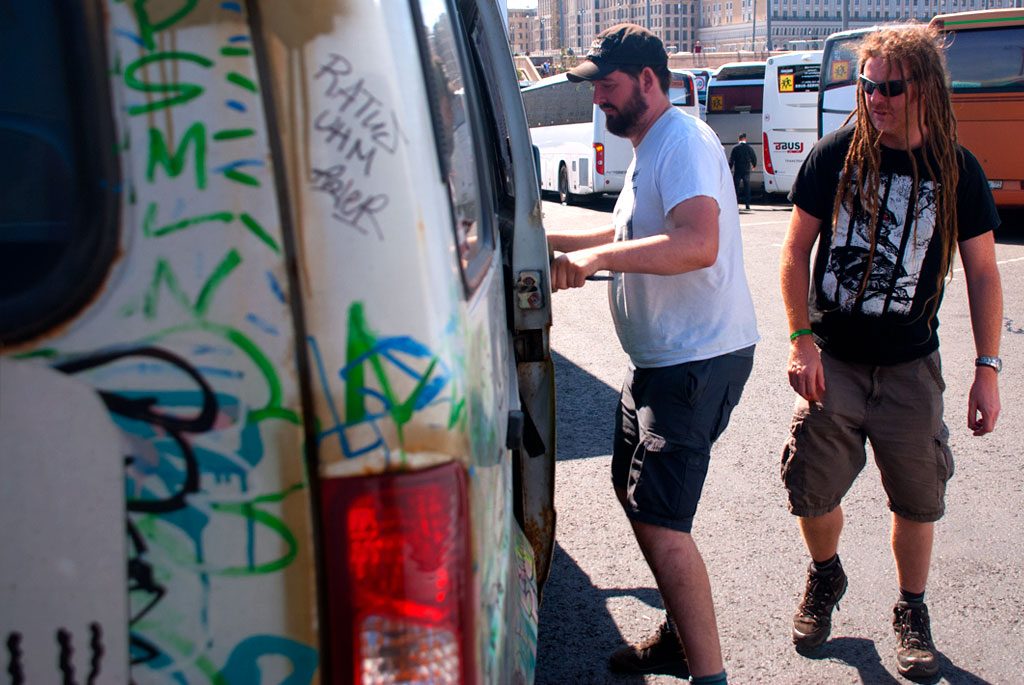 I think this is helped by the weather and crowds. Last time, it was bloody miserably cloudy and there was barely anyone around. It felt cold, grim and stark.

like any self-respecting family photo album from the nineties. 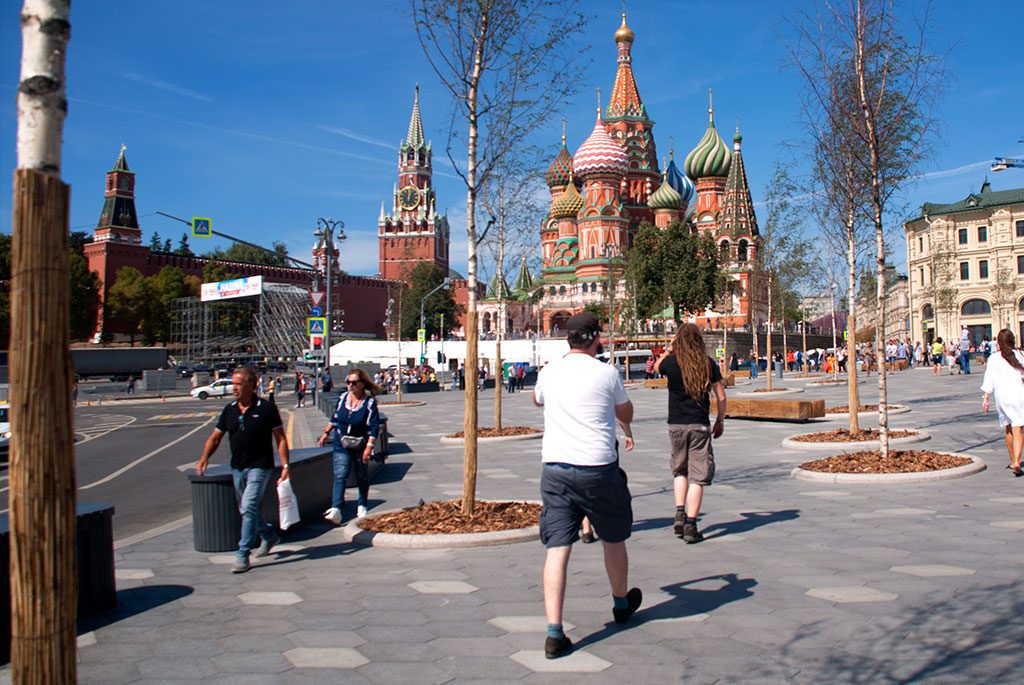 On our way to Red Square, Moscow

Today though, the sun is shining and people are here in their thousands. I expect it’s often like this during the holidays, but it feels some of the World Cup vibes are still here.

Streets are alive and colourful, I hear more languages being spoken than I’m even sure I thought existed (thankfully, no Welsh) and the whole pace just feels alive. 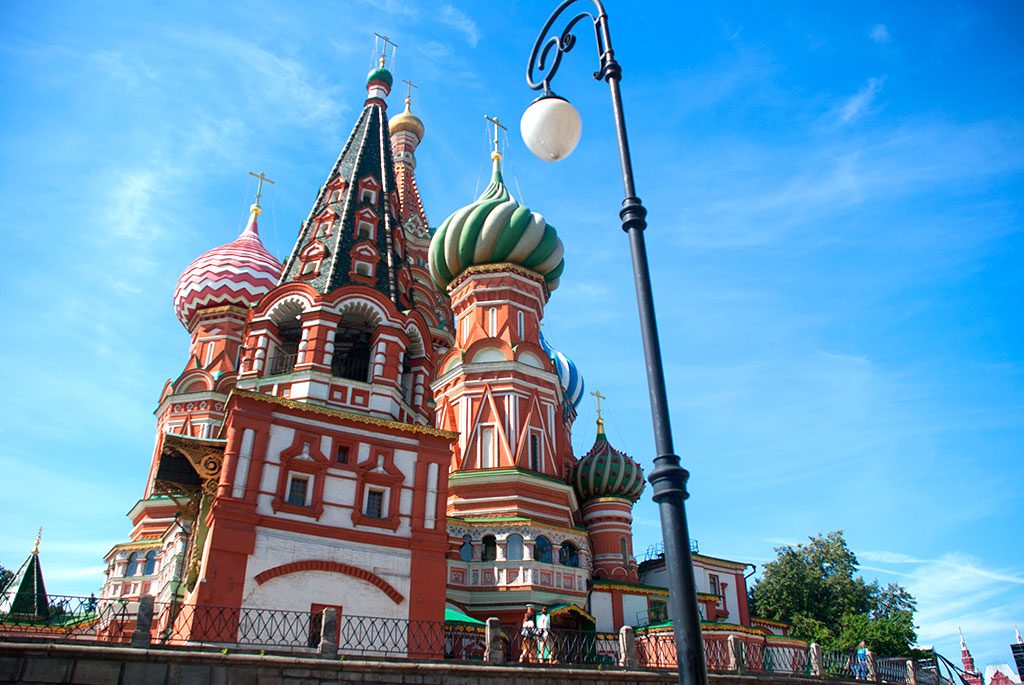 It puts some of the more forboding architecture and statues in a very different light.

We proceed along with the crowd to Moscow’s State History Museum. Before this is a statue of Marshal Georgy Zhukov on horseback, erected in 1995. He was prominent through many battles during World War 2, though perhaps most notably the Battle of Berlin, in which the Nazi’s were defeated. This effectively bought an end to the war.

He was one of very few individuals willing to express himself freely infront of Stalin, one of the major contributors to his seemingly legendary reputation. While (if I understand this correctly) this helped him gain favour and respect from Stalin, it likewise contributed to the downfall in their relationship. 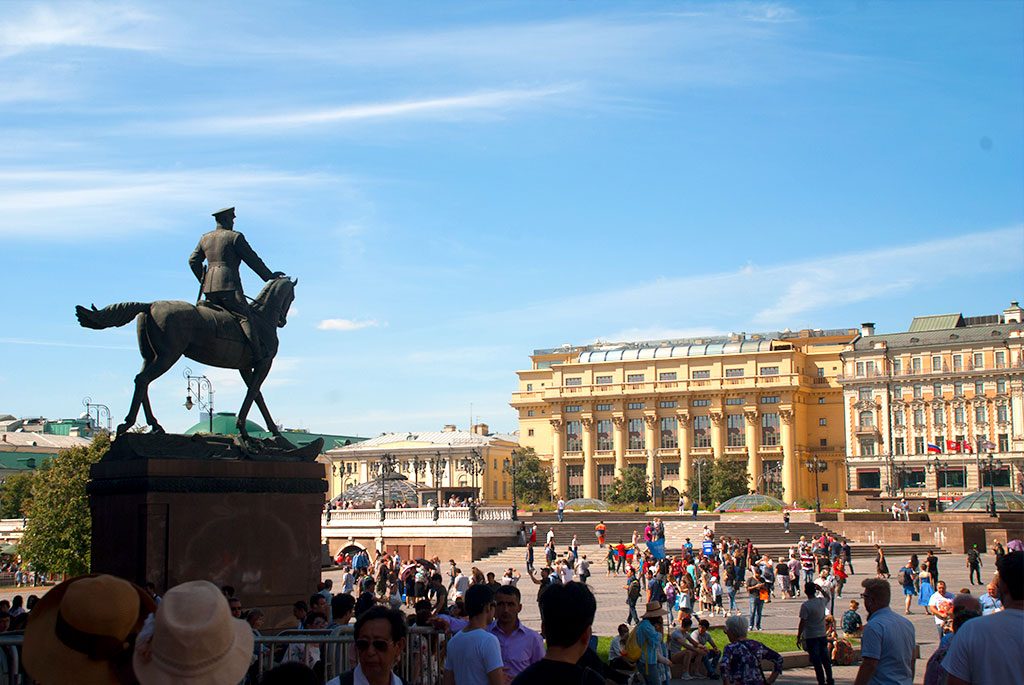 He’s also played by Jason Issacs in the reasonably enjoyable ‘The Death of Stalin’.

We continue to enjoy all sights and sounds that Moscow has to offer.

The gaping shin wound Matt sustained during this crash through the stage floor last night is looking gross. I mock him for this and advise we take a band photo before he succumbs to some Walking Dead level shit. 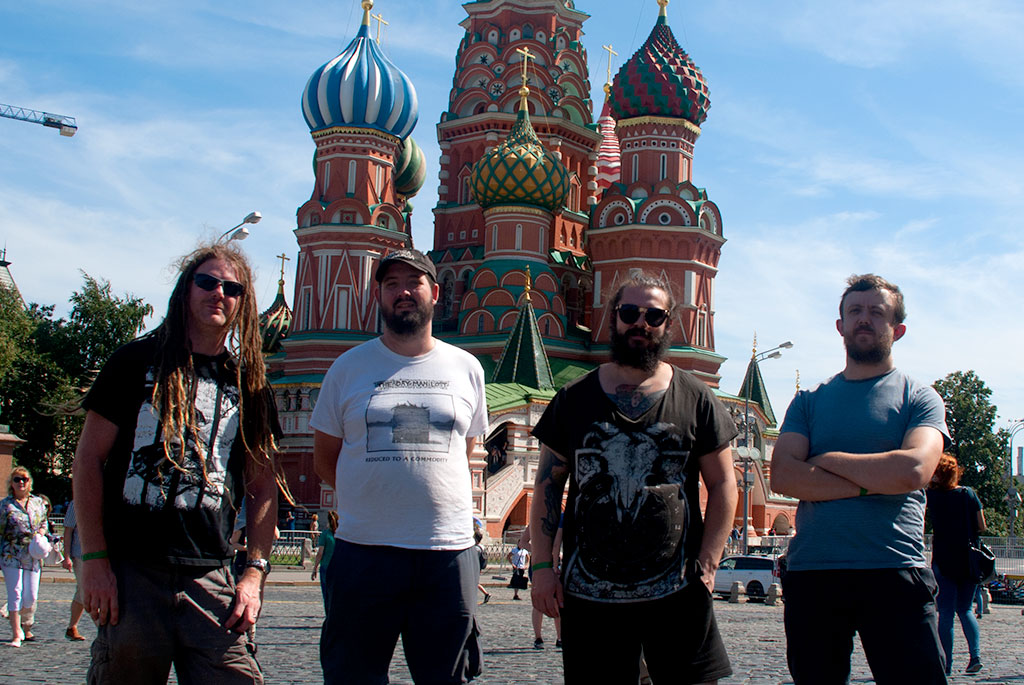 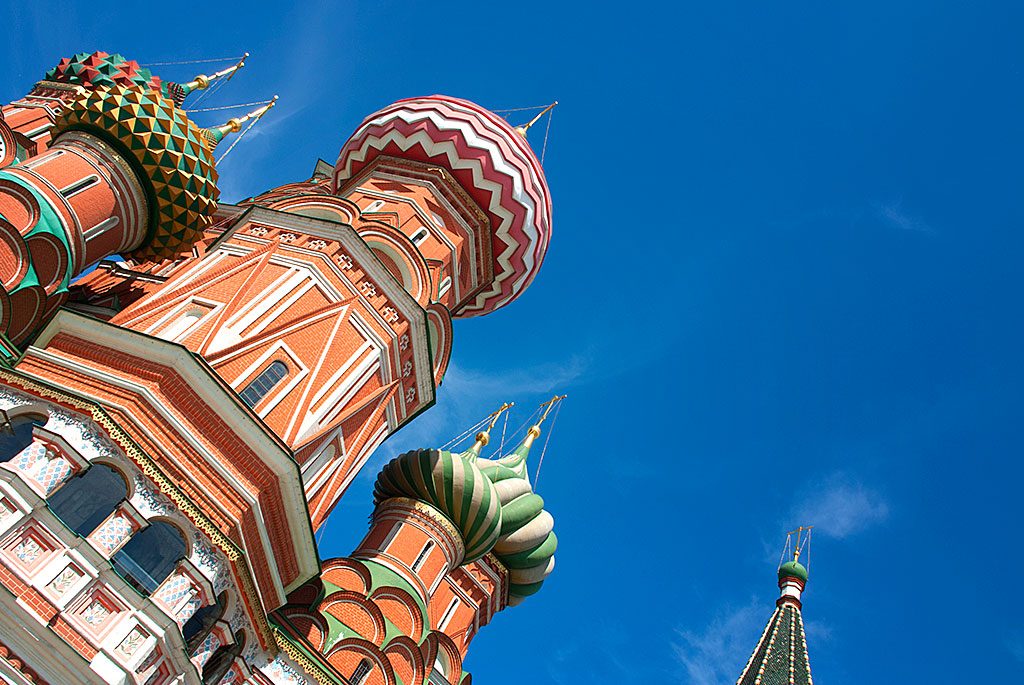 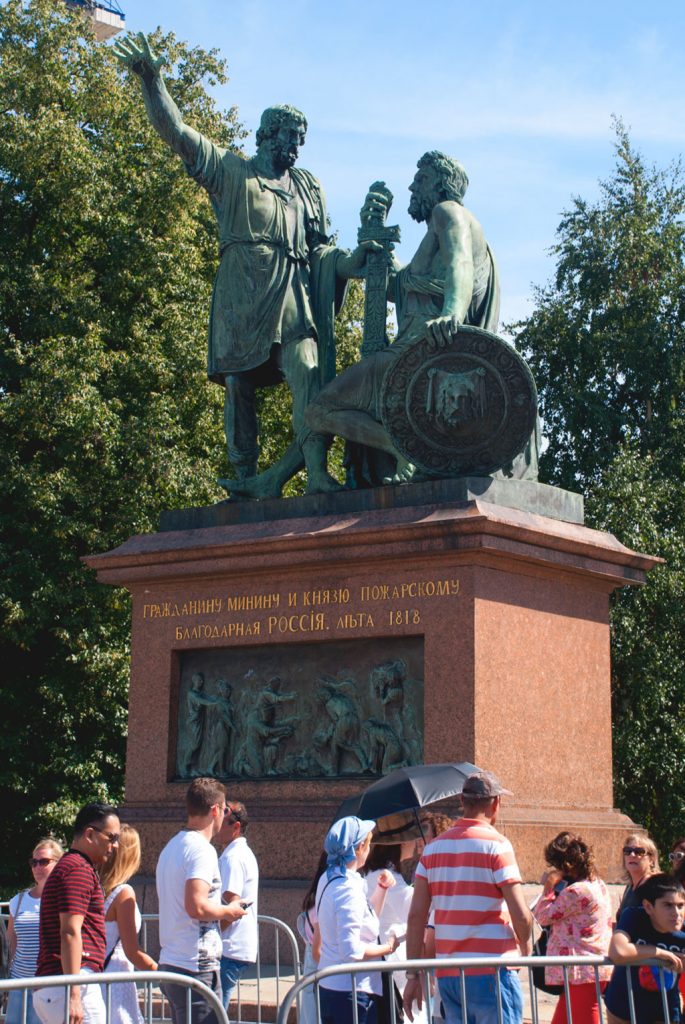 We make our way back to the Gazelle and depart for to Nizhny Novgorod.

I have a mountain of work I need to get through and since the drive ahead of us is set to be a long one, I ask if Alex would please plug in my inverter so I can make a start.

Of course it doesn’t bloody work.

It worked at home and had five stars across Amazon, so why on earth should it bloody work?!

Denis concludes the little metal knob at the end of the thing that goes into the cigarette lighter charger jobby is too small. Not the first time I’ve heard this. This could potentially be addressed with some ease and technical wizardry, but for now I’m just going to sulk. Fixes to the mobile version of Marine Dynamics Academy are just going to have to wait.

We picked up copies of our latest release, last night. I haven’t yet taken a look at them yet. I tear back the tape, remove a case and peruse my handy work.

I notice Matt is wearing the same T-shirt in the photo we just had taken, as he is on the band photo in this CD.

I hope it’s been washed since then.

Either way, I’m chuffed, the CDs have turned out really well. There’s always some degree of just hoping and praying that the artwork will look as intended when the physical copies arrive, but these look pixel for pixel as they did when I produced the designs.

Go me, for finally sorting my monitor calibration. It’s only taken fifteen or so years. 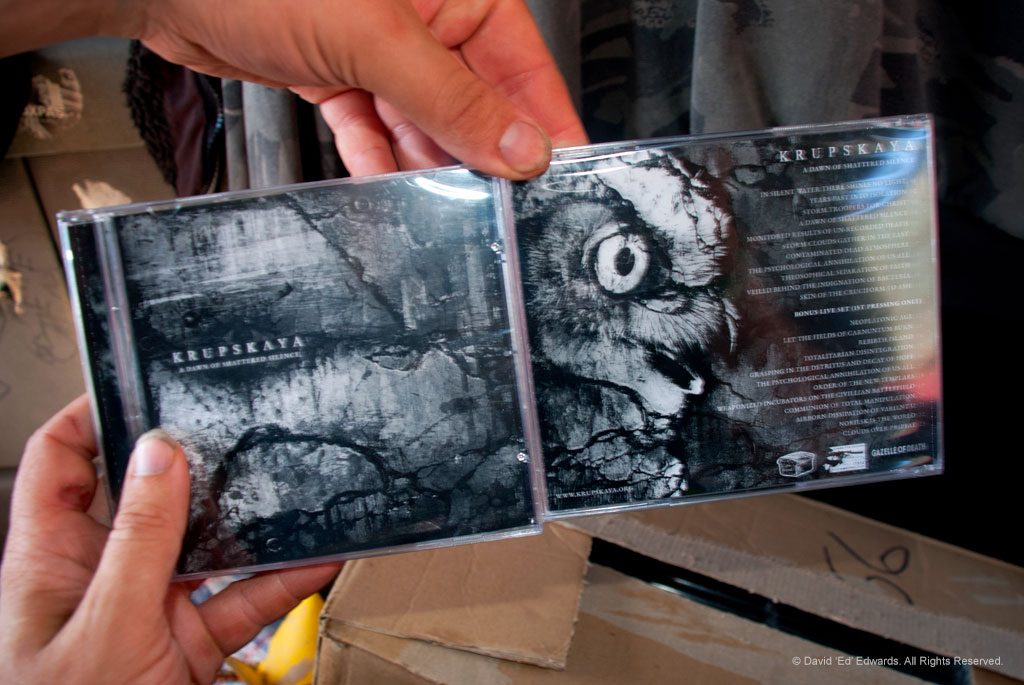 Dawn of Shattered Silence – Front and back cover

As much as anything else, I’m happy to see that Sassy (the elder of our two Great Horned Owls) is now immortalised. Her face adorns the back cover, as her eye does the CD itself. Each looks badass and her presence contributes to that in no small part. She has officially earned my forgiveness for shitting all over my feet, back in May.

Now I’m going to sleep because this is going to take forever… again. 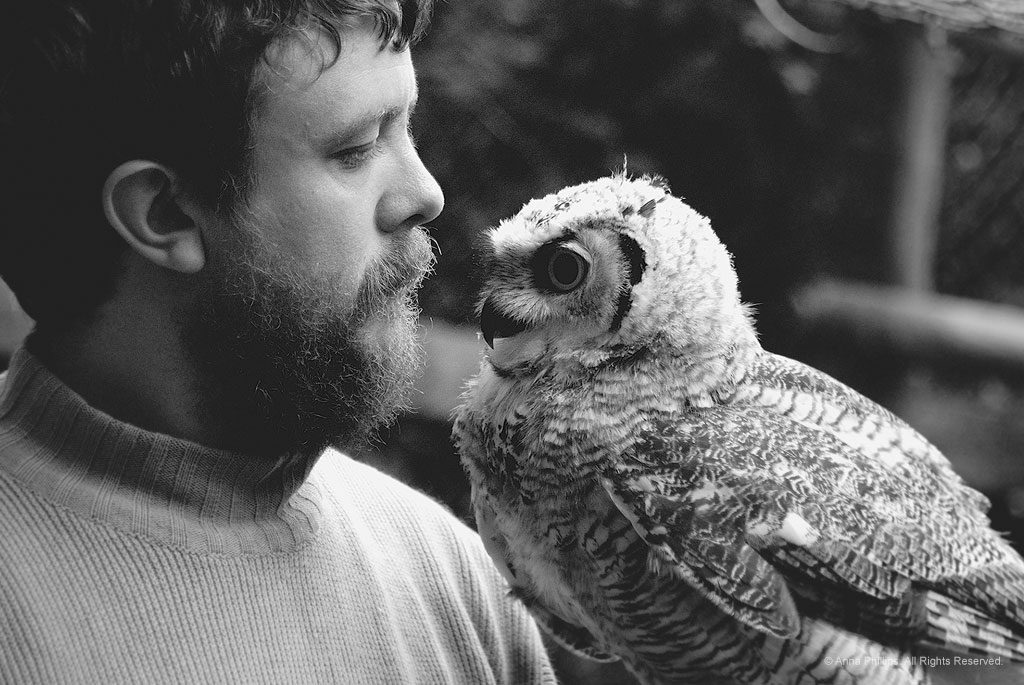 Where the hell are we even going?!

Similarly to our escapades in Moscow, tonight’s performance takes place out in the wilderness.

I’m not sure how long ago we actually arrived in Nizhny Novgorod, but Denis departs from the main road and before you know it, we are on dirt tracks absolutely swallowed by darkness. I love this. It reminds me so much of mine and Anna’s time in Mozambique back in 2009. The darkness is thick and all you have for company are the sounds of the engine and insects.

Beyond the headlights of the Gazelle, the only light we’re treated to are those of the city on the horizon. Neon signs, vast cultural structures and rows of street lights illuminate the distant wall of darkness. 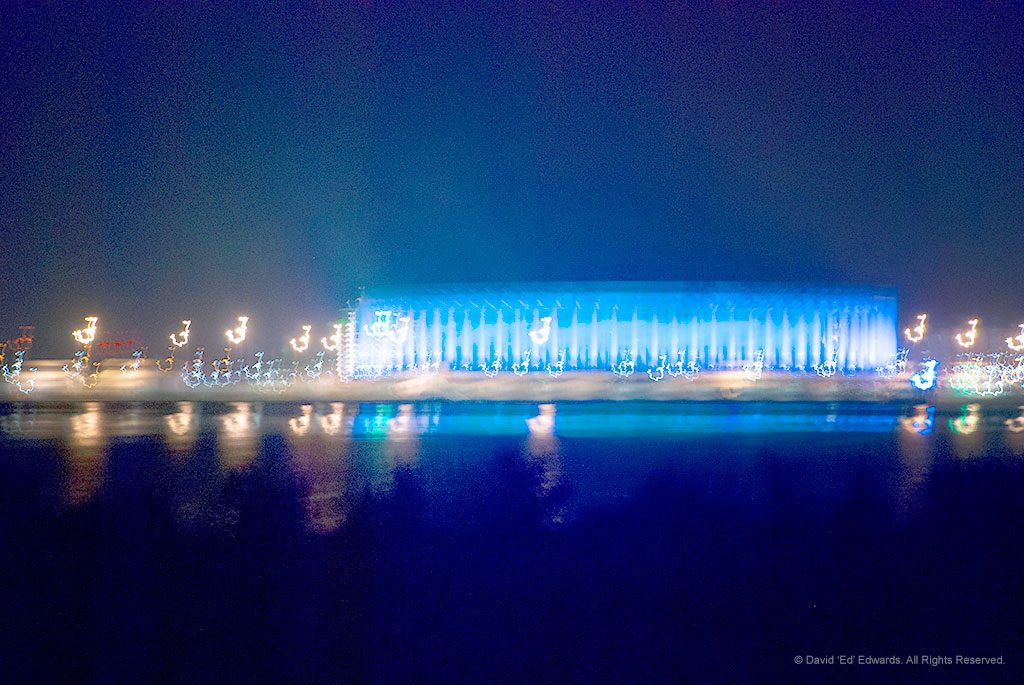 The city lights of Nizhny Novgorod at night

The Gazelle clambers through holes and hills in search of tonight’s festivities. To no avail.

We have absolutely no idea where we are. Denis calls the promoter to get help with directions, but based on what I can hear coming through the phone, this guy’s in no shape to be giving directions.

I mean, he sounds in no fit state to breathe. We’re arriving at the very end of a two day festival, so the mathematical probability of anyone there being of sound mind and body, is comparable to that of Jose Mourinho making it to the end of the season.

I’m still sceptical about United’s chances of having a decent season, this year.

We circle back on ourselves and elect to try a different route, confident that it’s just one other turn we needed to take to be on the right track. 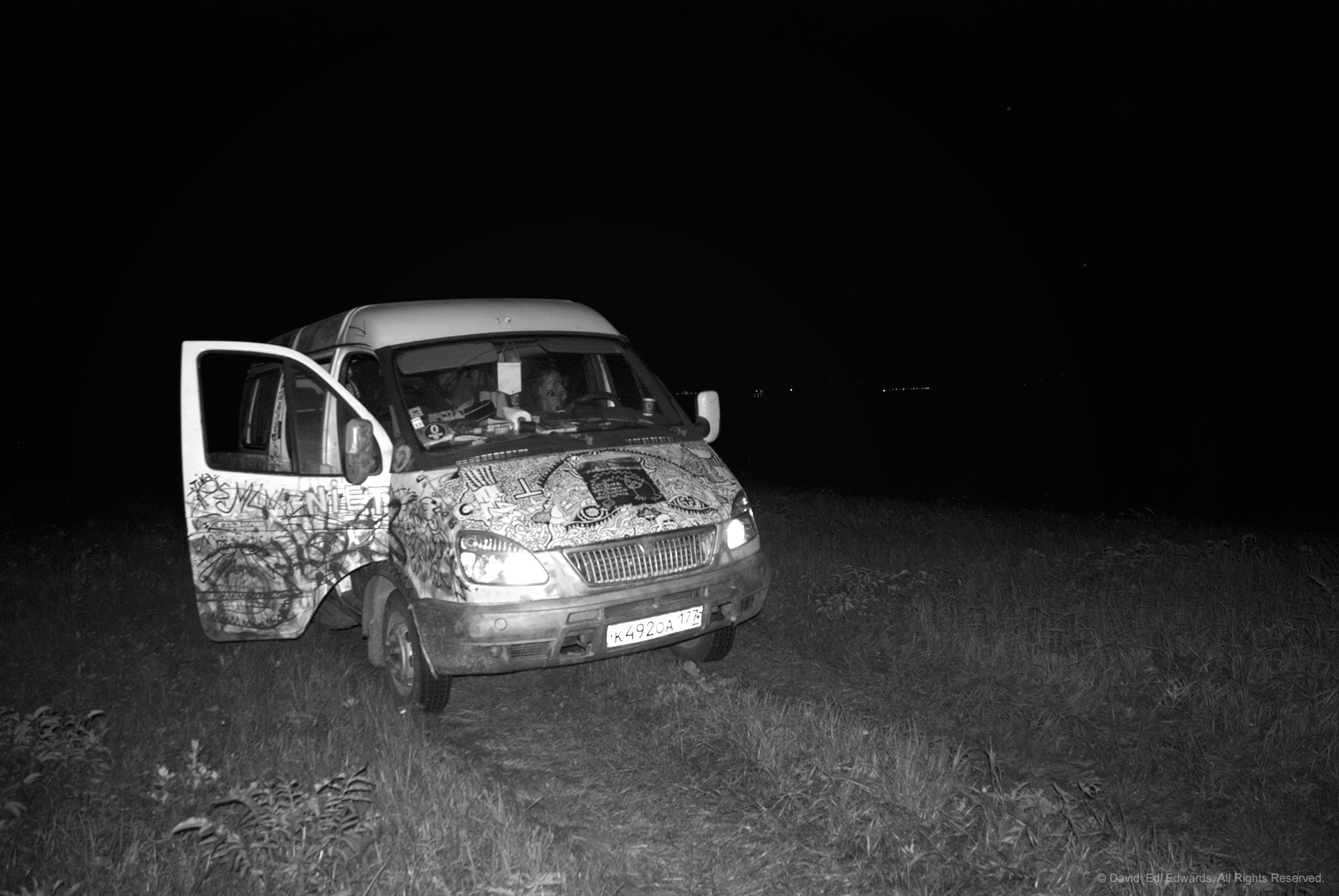 After a few hours spent getting stuck in undergrowth, catapulted through the air by unexpected natural ramps and navigating dead ends, we finally stumble upon the festival… which has clearly long since ended.

Most of the very few who remain are no longer of this earth. One dude stands in nothing but an unzipped jacket, cock out for all to see. It’s one of those moments where you wish your body wouldn’t compulsively make a double take.

Mine does. I really hate penises. I just think they just look like a gross after thought that our creator (be it an omnipotent diety or generations of evolution) figured they’d come back to at a later date, only to not be arsed.

I turn my mind to other things.

The place we’re playing is a really, really cool spot, in fairness. We’re in a small clearing in the woods, you can hear and smell the water of the river nearby (I think we’re technically on an Island) and random lights from the city pierce the engulfing foliage.

There’s also a dude from Newcastle-Upon-Tyne here. This is not what I was expecting. That he’s also incredibly friendly and well spoken likewise contradicts a number of my expectations. But I don’t judge myself too harshly. Afterall, he’s from Newcastle.

We hurriedly begin our set and honestly, it’s just shit. We don’t play particularly well and for some reason the sound man keeps turning Riley’s guitar down to all but mute. There’s also some mad shit going on with Matt’s bass. He has a brief strop and puts his instrument down before thinking better of it and knocking some brutal shit out again.

I like it when Matt gets pissed off, always has a measurably positive impact on the intensity of his playing. It’s why I like to annoy him whenever possible, too.

The crowd don’t seem massively up for this, either. Don’t get me wrong, they’re accommodating and enthusiastic, but there’s just an odd vibe. I think the mix of us getting here late, most people leaving so they’re prepped for work tomorrow and those who are left being too drunk to really know what’s going on, is just creating a less than unified sense of occasion.

Plus, we’re coming off the back of one of my favourite gigs we’ve ever done. This was inevitably going to be a step down.

We play a shortened set, they seem to enjoy it, so dwell on today’s shortcomings I will not.

We’re treated to some good grub around the fire. I talk a little with our Newcastle friend and a couple of folks who enjoyed the show.

There are midges all over my food and I’m feeling restless, so I make my way over a small hill, toward the direction of the city.

It’s absolutely stunning. We’re separated by the river which is bled into by a small beach. As much of a comedown as tonight might’ve felt compared to Moscow, the beauty of the area is marginally superior.

I don’t bother taking a picture, I just want to enjoy this with nothing between myself and it. Alex walks past with a couple of people who evidently enjoyed the show more than I was prepared to give us credit for. I can’t make out what they’re discussing, nor have I any interest in making a contribution of my own.

A gentle rhythm is kept by the swaying water, sat atop a deep but subtle hum of the city sleeping behind it. I’m shrouded in a dark blue canopy which erupts into the oranges, yellows and neon hues of Nizhny Novgorod, scattered and dancing in the reflections beneath. The sky is black, speckled by stars that may have died years before. Old photographs of timeless energetic forces, to paraphrase a famous Doctor.

Some utter maniac has started blast hardcore Gabba through the PA behind me.

In all your weirdness Russia, I love you.

And I think I just saw a spider. Fuck this.