Sassy girl and Will are still barely a few months old, but their appetite and penchant for mid air tantrums could put even my own to shame!

My last journal update on our great horned owls stretches all the way back to July. Remember? That was when we still had sunshine in the UK.

Desperate to avoid becoming the type of father who gets hauled onto The Jeremy Kyle show, I have visited them many times since then. They see their mother every couple of days too and I’m pretty sure they prefer her.

That being said, it’s been a fair while since I took any pictures and I know a few folk would like to see how big they’re getting. 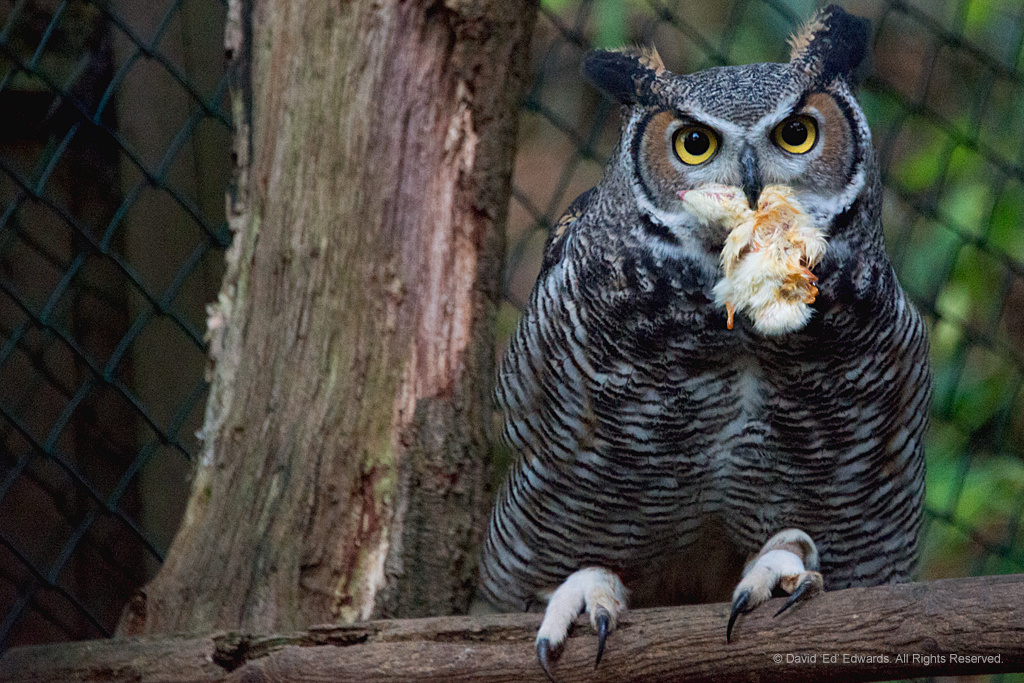 Will, named after my granddad. We thought that was slightly better than just calling him Stinkie.

Sassy girl is still the bigger of the two, as tends to be the case with great horned owls, or any predator birds for that matter. Will (pictured above) is not far off and neither bird struggles when it comes to swallowing large chucks of flesh.

Their personalities haven’t really changed much at all.

Sassy is still very much the dominant bird and several times during today’s feed, she would bully Will away and take the food for herself. I wonder if that’s what has led to him being the slightly more aggressive, having to be so if he’s to keep his bigger sister in check. 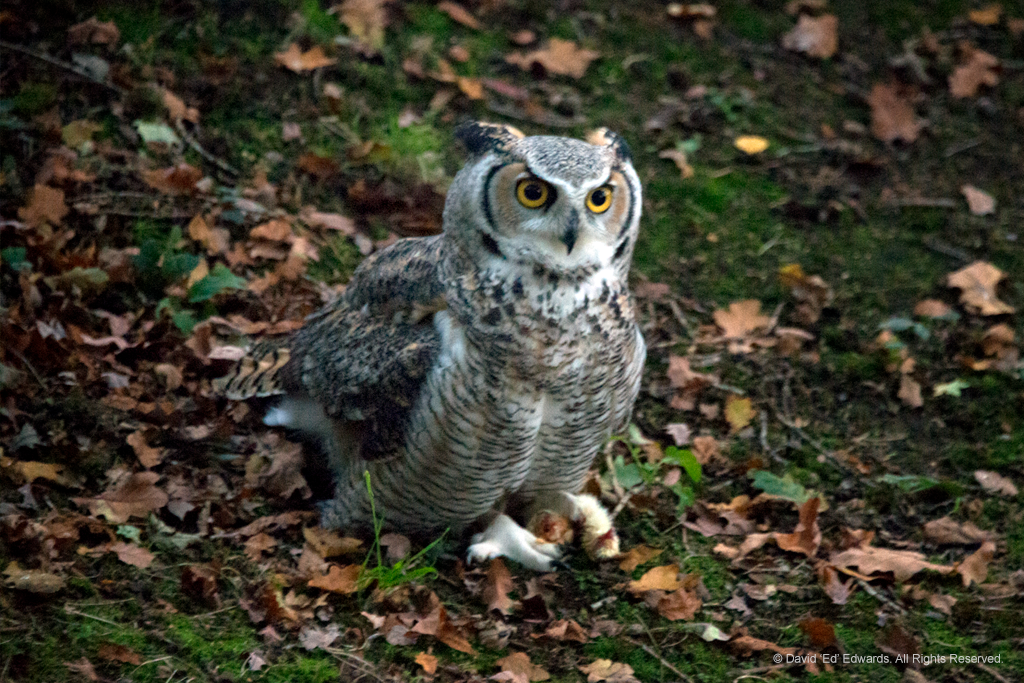 Sassy Girl is still very much in charge, identifiable by her lighter toned feathers.

Will is also the more skittish of the two. He tends to fly in (often the entire length of this enclosure), take his food and only sit on my hand for a couple of seconds, before flying away again. Anna says there’s been a few occasions when Sassy has gone for his food, which is probably why he’s so keen to keep it for himself.

I have similar issues when we go for dinner together. I specifically ask “Do you want chips?” because I know full well, she’s only going to end up eating mine. “No” she says “I won’t want any at all”, but then I’M the dick when my chips do arrive and surprise, surprise, Anna’s grubby mits are all over them and I attack her with a knife. Just order your own bloody chips!!

Sassy on the other hand, is quite content to sit on my hand after eating and pose for photos.

She’s such a stunning bird.

Sassy looks especially badass when flying across the enclosure. Her eyes never leave the prize, absolutely fixed on its position as she swoops down from her perch, rising up towards my hand with her legs out and wings stretched backwards

Will often observes from the background, thinking to himself “Greedy bitch, I’ll have you one of these days!”. That being said, he’s also the better flyer. For how he can be skittish, once he’s in the air he’s incredibly graceful and focused.

Their wings are incredible. You don’t really get a sense of how large or full they are when their sat still, or even fly past you.

The second that their talons make contact with your hand at the end of a flight, that’s when you really get a sense of their wingspan. Long, thick feathers that are just effortlessly elegant.

Will just looks like an absolute bad ass, regardless of what’s going on. 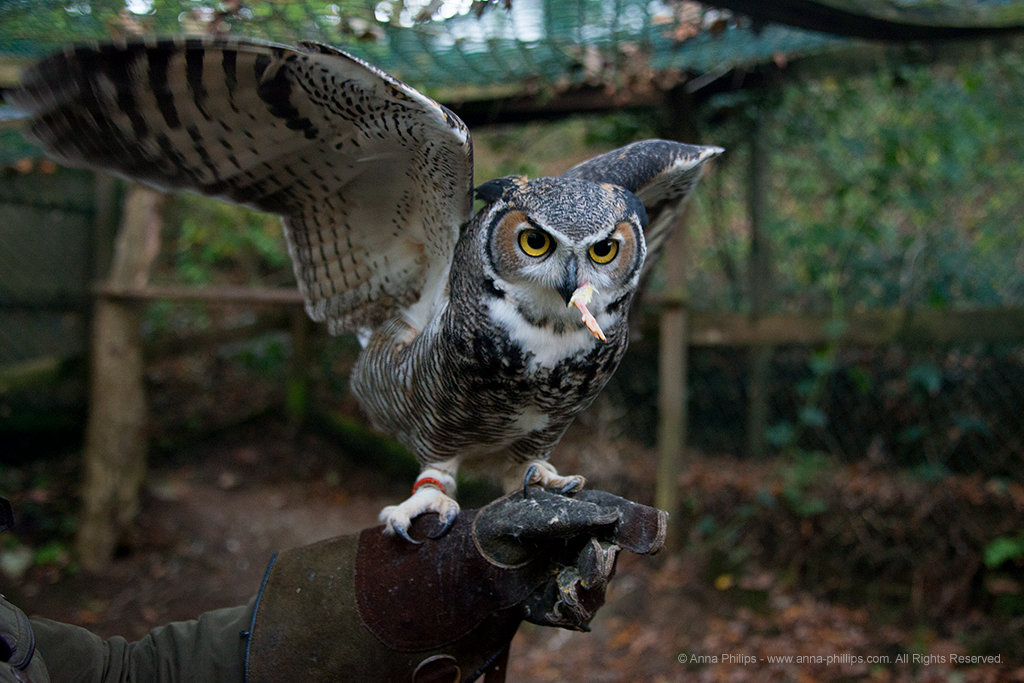 Will enjoying himself a bit of leg

I know you’re not supposed to have favourites when it comes to children/pets, but I always do. As far as these two are concerned, Will is the lucky recipient of such adoration.

It’s his personality more than anything else. When he was a baby he was by far the less confident of the two. Sassy would always be the first out of her cage and fairly comfortable being exposed outdoors. Will on the other hand, would often cower behind her or crouch down for cover.

While Sassy is still the more dominant of the two, Will has blossomed. He’s inquisitive, strong and far braver than he was a few months back. I expect this is mostly due to them both being back at the park and subject to a broader range of stimuli. 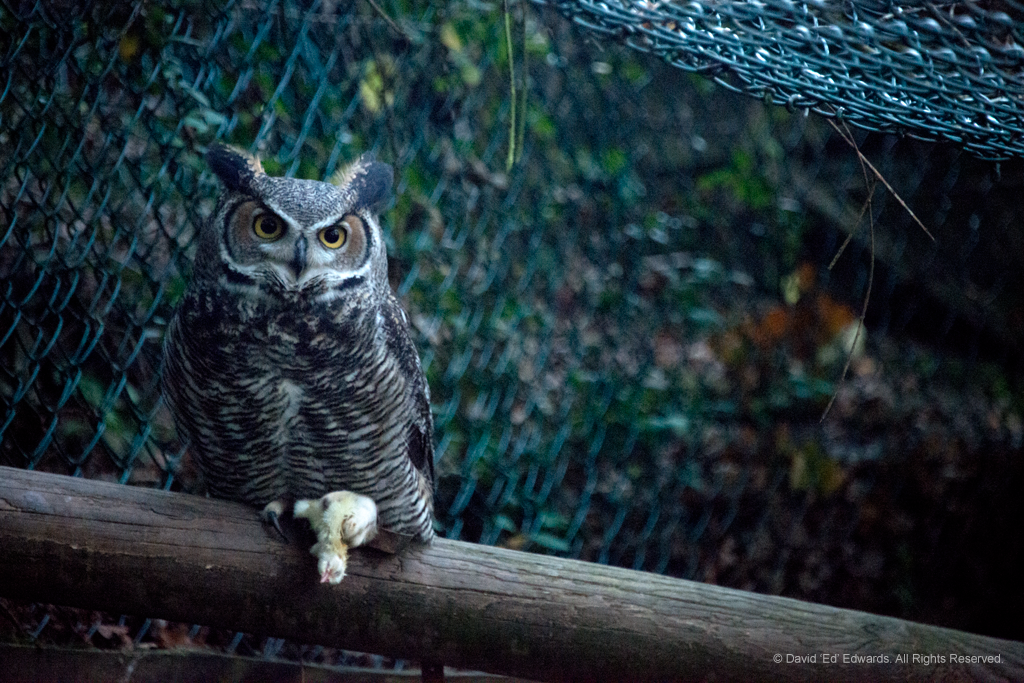 The horns are up!

Anyhow, I’m chuffed with how both are turning out. Health and growth wise, they’re doing well and apparently, are quickly becoming instant favourites with park visitors. Their size, grace and in particular, strong personalities have won over many.

But I’d be lying.