While I’m happy to report that the children have become surprisingly tall, I’m sorry to say I must keep this entry quite ‘short’. Hehehehe… ugh, I’m dead inside.

Life is short, these gits aren't

It’s mad to think that just a few weeks ago, these beautiful, wide-eyed creatures of untold grace were but a pair of glorified chicken-dippers. Emaciated maquettes of coarse, pink skin stretched thinly across jagged bone, sporadic patches of tattered fluff, chirping with no clear sign of cause nor intent.

Like me, up until the moment I wake up.

At least I shit less.

That’s a lie. They’re an improvement on me in every way.

So at the end of last week, Anna took the children back to the Kingsley Bird & Falconry Centre for another review of their progress. The owner was happy with their size and the regularity of their feeding, though he did note that they’re easily distracted – which I insisted (quite vocally and with no small amount of theatrical arm-waving) was a flaw they’ve inherited directly from her.

But this didn’t come as too much of a surprise. They are still young and in fairness, we and Jasper are the only sentient beings (arguable definition) to which they’ve been consistently exposed, so he did advise we be conscious of this and try introducing them to a wider variety of stimuli.

He likewise warned us that in all likelyhood, they’d be flying within the next two weeks. They’re still bouncing/falling around more than anything else, but once their wings are strong enough they’re likely to pick up the rest quite quickly.

When this time arrives, it’s unlikely they’ll continue to live with us so realistically, we have a fortnight to nail the remainder of their training.

I just clean up shit. 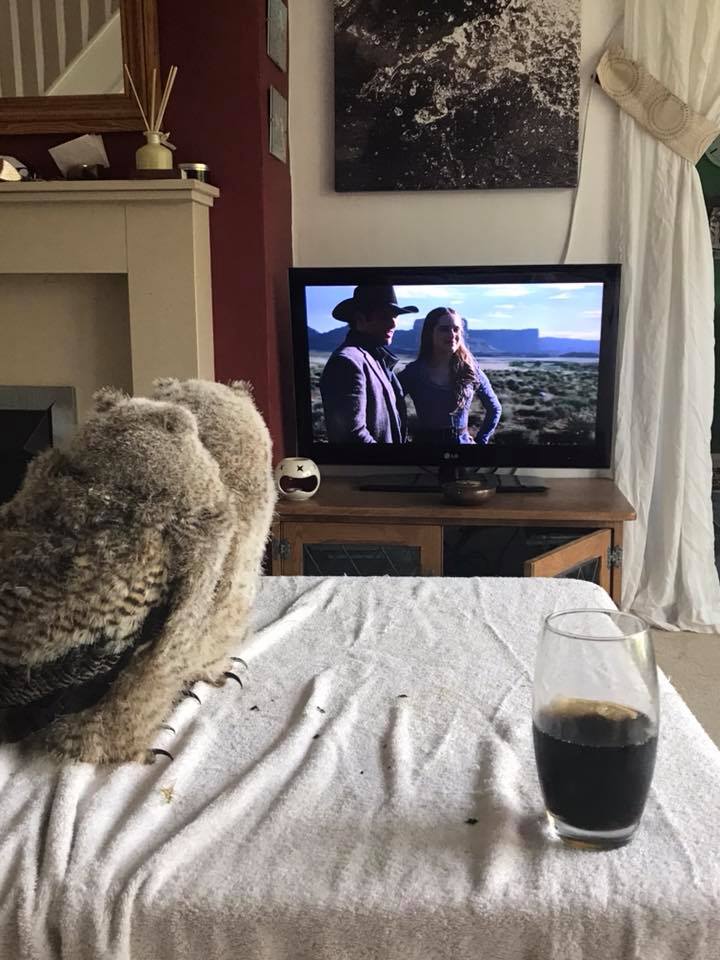 They’re still pretty crap a the whole ‘flying’ thing. They are improving, but their flights tend to be more of a prolonged awkward jump than graceful glide through the air. They’re clumsy, unsure of themselves and panic whenever they touch or land on something other than the floor.

Which is great for me, because watching totally innocent creatures fail at life makes me feel better about my own shortcomings.

That’s until they try ‘landing’ on something stupid like a bloody picture frame, panic and send various desk items flying across the room with their wings.

But it is rewarding to see their progress and I’m genuinely looking forward to seeing them finally soar. Just so long as it’s not straight into a power line.

Our friend Georgina came to visit, which was a great opportunity to introduce Sassy and Stupid Boy to something a little weird and different.

She won’t mind me saying that, because it’s true.

Or is it the truth that usually gets me into trouble? Bollocks, I don’t know, I guess I’ll find out when this goes up. Anyway!

They were a little unsure as first (as you would be – she’s Southern) but it really didn’t take them long to get used to her. As soon as we take them outside, it’s almost as if the pure abundance of random stimuli takes their attention away from any singular being.

More importantly though, is they’re slowly starting to improve at climbing onto our hands. We’ve had to be relatively forceful for a while now, when it comes to getting them to sit on the glove. There’s still a lot of progress to be made, but there is a marked improvement on how quickly they’ll climb on.

Using food has been imperative to this. We whistle (well, Anna whistles, I sound more like someone with a severe lisp trying to say sausages) and get their attention with some food. Once they’ve locked onto the food with their eyes, we stroke it across our wrist and encourage them to come forward.

Eventually, they’ll know to fly onto our hands to collect the food directly. For now, we’re just building that association and getting them comfortable with climbing onto our hands.

Week three down, STILL no disasters

I’m struggling for time a little at the moment and so have needed to keep this one fairly brief, but there’s genuinely been little else to reflect upon.

There hasn’t really been a significant step forward this week, like there has been previously. They are improving, growing and developing no doubt, but I can’t really point to ones any single event which best reflects the progress they’ve made.

Sure, I could go on for hours about all the subtle changes and nuances in each bird’s character that we see developing, but that would be boring and I’m lazy.

I bugger off to South Africa next week and so all updates I receive are going to come straight from Anna. I’m going to miss the little bastards, but am also excited to see just how much changes over the course of a fortnight, when I’m no there to witness the small iterations along the way.