While they’re definitely growing, there’s absolutely no way animals of this size should yet be able to produce ten times their mass in faeces.

Welcome to the Caspian Sea... of poop

I could spend this entire entry talking about the seemingly infinite amount of poop these creatures create. Not just because there’s so much of it – I also quite enjoy talking about poop, in general.

Anyway, I was busy changing the towel in their cage, since it’d become positively vantablack under the sheer volume of faeces, over night. To be clear, we only keep them in the cage during the times when we are out or sleeping. Otherwise if they were loose and had an accident, we’d look like pretty shit parents.

If you’ll pardon the pun. 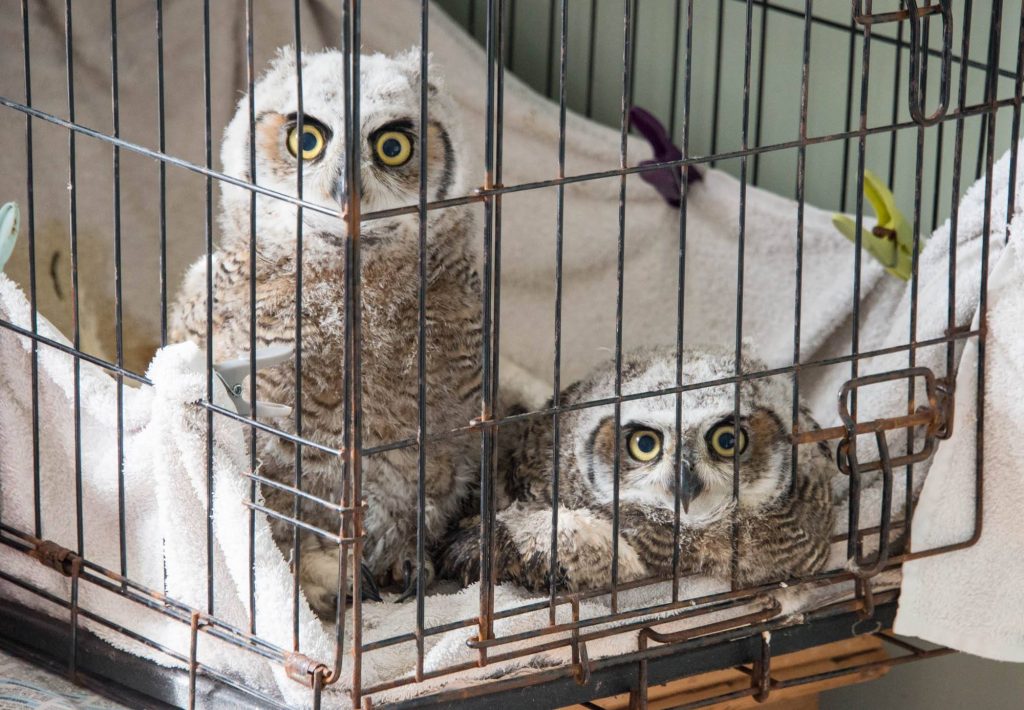 Sassy Girl took opposition to this, firing a stream of napalm-grade turd over my leg which promptly ate through three layers of clothing… the turd, not the leg. Why the hell I was wearing three layers anyway I couldn’t possibly tell you, but I’ve not had this violent a gag-reflex since I last saw a ginger child smiling.

Rage inducing as this was, I can’t stay perturbed at them for long and in fairness, their poo is far, far easier to clean up than mine.

At least their’s is neither green, nor as likely to leave a permanent stain.

Towards the end of Week One, Anna took the owls back to the Falconry Centre where they’ll eventually return, full time. This was to get a bit of feedback as to how we’d done so far and just check that everything was okay with them, physically.

The owner was happy, but advised that we begin abiding a far stricter feeding schedule and attempt physical interaction with the owls, every hour or so.

Or, would you say, every howr or so? Amirite???

Reason being is that if the birds aren’t comfortable around people within the first couple of months, they probably never will be. This greatly diminishes their value from a tourism and outreach perspective, as you can’t be taking predatory birds to visit people if they’re going to go bananas.

I mean, I’d personally pay to see such a thing and take my own deck chair, but that’s because I’m a bit of a dick. 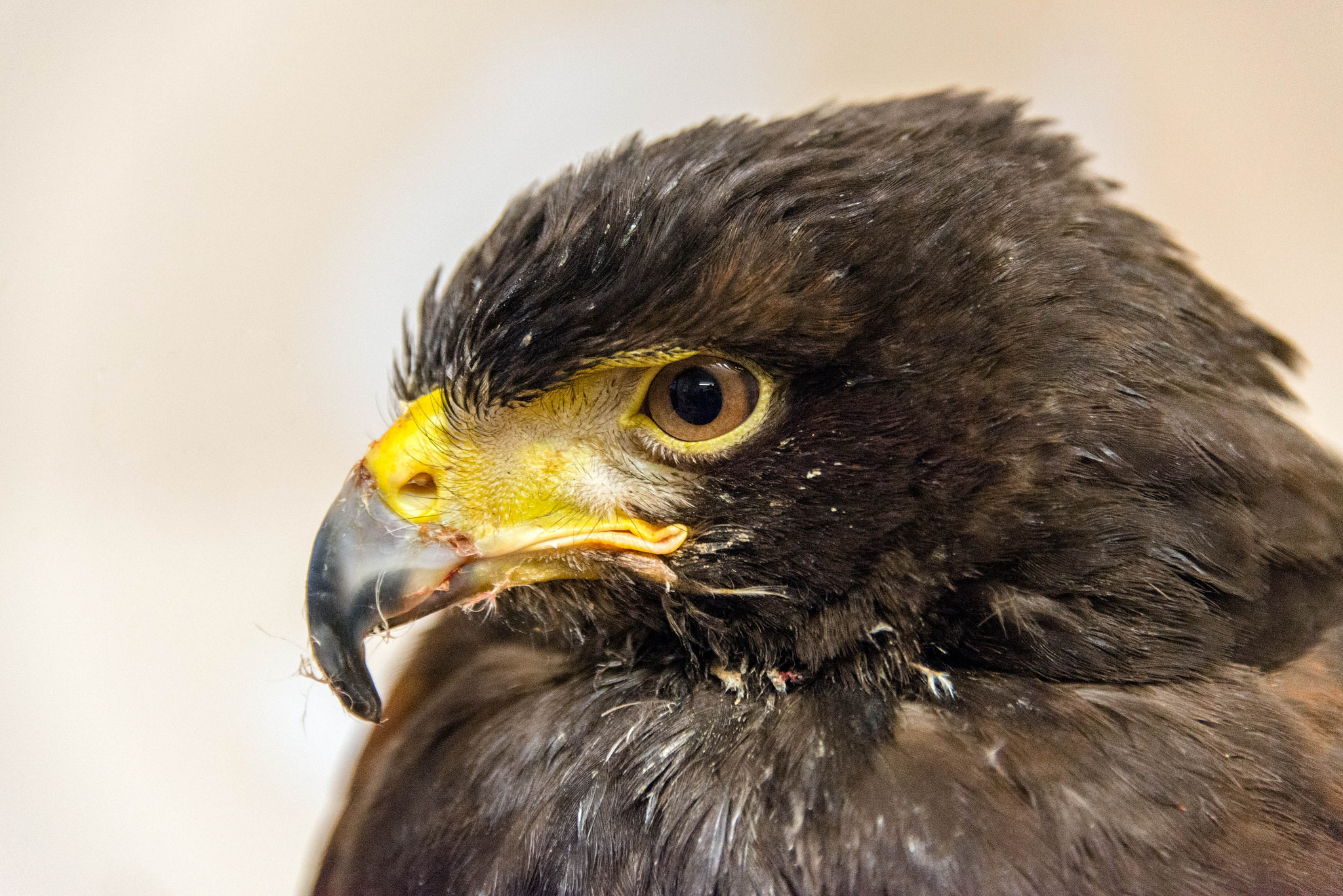 To be honest, I’ve never been especially comfortable with the thought of ‘training’ wild animals. Don’t get me wrong, I don’t think its inherently wrong, nor would I ever count myself among the horde of keyboard activists who spend more time denouncing any practice which doesn’t align with their own superior, Utopian world-view, than actually contributing to said world-view.

Simply put, it’s a lot of responsibility. I’ve always assumed there’s a careful balance between getting an animal to react positively to your influence and quashing its natural behaviour entirely. After all, what’s the point in seeing a wild animal, if everything that makes it wild has been nullified?

But we’re given some clear pointers on what to do and how to maintain said balance. Likewise, any qualms I might’ve had regarding these animals maintaining their wild integrity, are swiftly obliterated by the behaviour of some of the other residents.

Some of these things would very happily fudge you up. 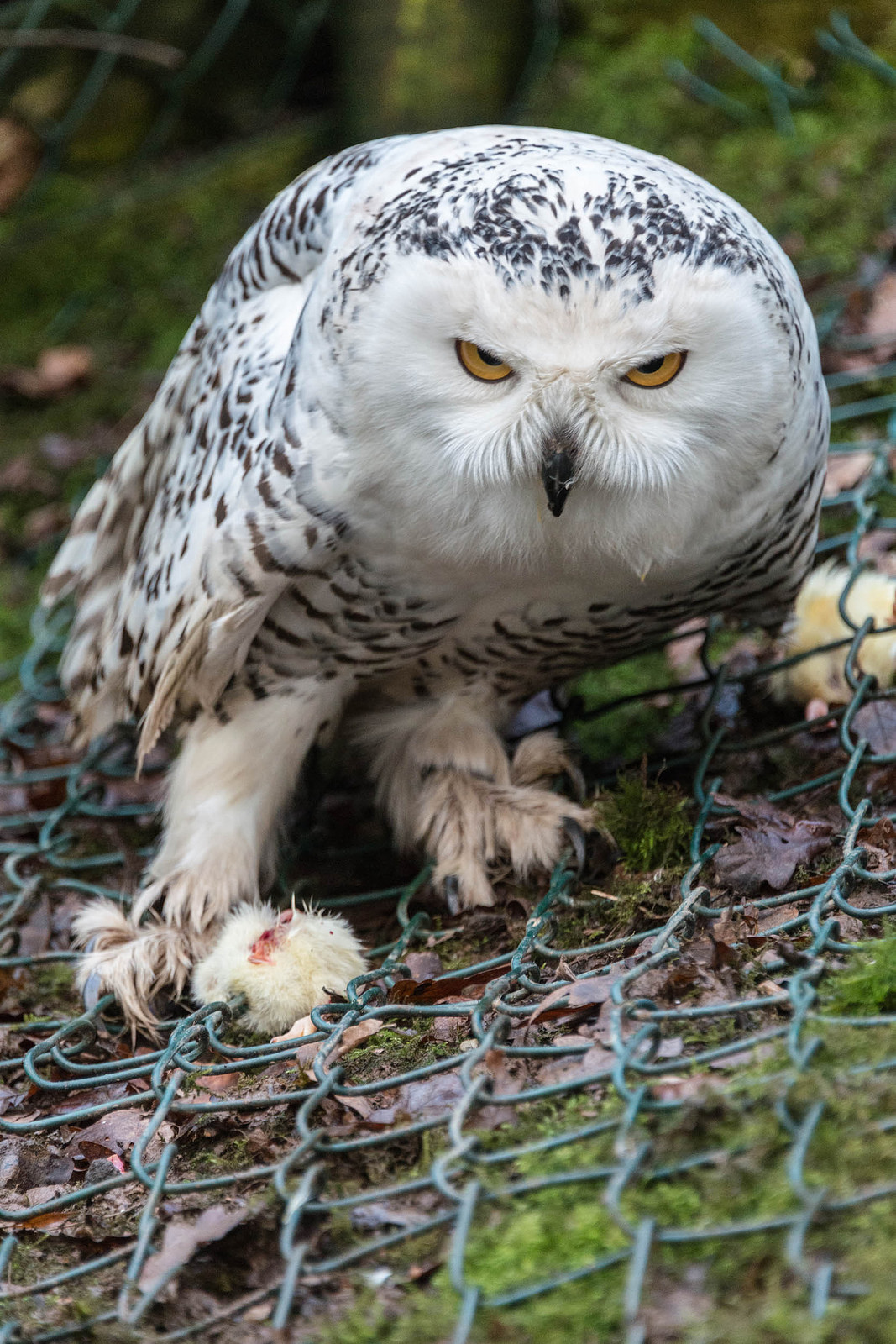 Annabelle… you don’t fudge with Annabelle.

They’re absolutely hopeless at flying, thankfully. If this wasn’t true, they’d likely be half way to Mexico already or, zapped by overhead pylons. A slightly more dire scenario then simply getting a bit of poop all over the place, I think you’d agree.

On the bright side, I find their struggles in the fact of such hopelessness quite entertaining. Watching them try to fly, is something quite special.

If I was anything close to being a real parent in 2018, the first thing I would’ve done is film their attempts. Naturally, I would then upload them to Facebook for the whole world to see and to embarrass them in their teens. Since I am in fact quite a crap parent, I instead implore you to please watch the following scene from Man of Shite.

To get an idea of what it’s really like; simply picture a pair of Great horned owls in place of Henry Cavil, a lawn that desperately needs mowing in place of the mountain range and greatly lower your expectations in terms of the heights they reach:

But it’s proper, proper awesome just watching them ‘figure out’ what flying is. They tend to either flap their wings (which already look impressive) with a surprised expression and to no avail, or they take a bit of a run up, flap again and perhaps manage to get an inch off the ground.

They don’t give up easily, either. They only tend to cease in their attempts when either I get bored and take them back into the house, or something else just captures their attention.

As the week passes, they continue trying and although we still don’t need to worry about an aerial bombardment from them just yet, there is a marked improvement every day. Two more weeks and I reckon these little gits will be reigning hellfire upon us from above.

Yeah, owls are cool – but where’s the cat?

So my brother’s family came to visit at the weekend. He and his wife, Stacey (a talented beautician) were keen to introduce my niece, Ida to her new cousins.

Ida is eighteen months old (I think, or rather hope), at the age where she is wonderfully expressive and curious about the world around her. There’s an infectious, joy-ridden enthusiasm for everything she comes across, which grows alongside her perception of the environment.

Sassy Girl and Stupid Boy however, are not treated to a fraction of this enthusiasm. It is reserved entirely for Jasper, this prick: 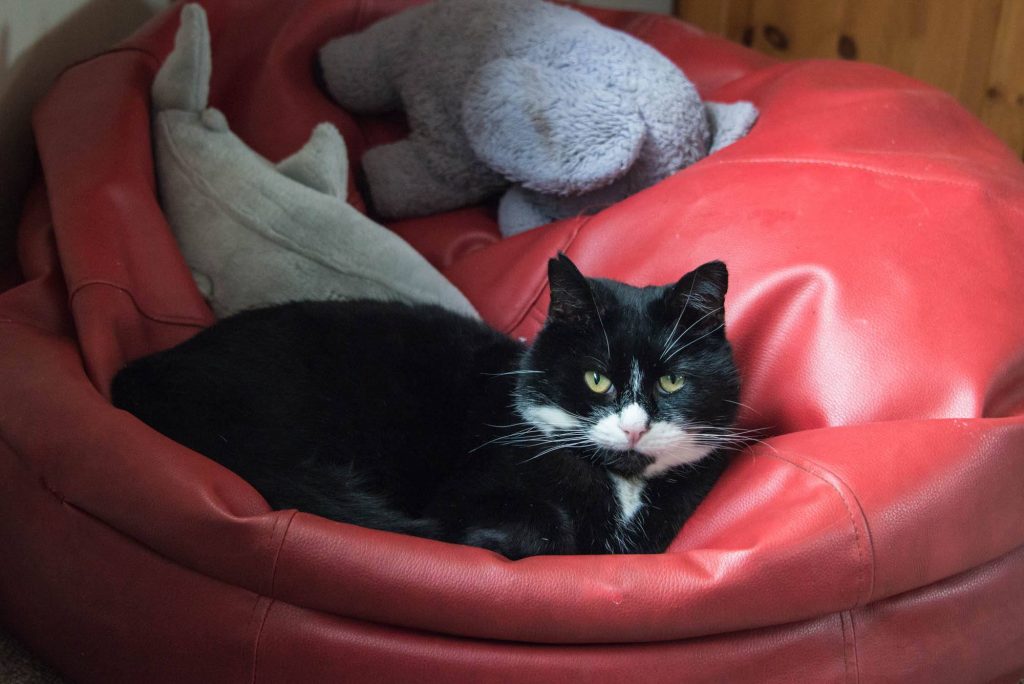 I’m frankly a bit gutted that she’s more bothered about the miserable git prowling the back of the yard, than the two beautiful avian creatures sat mere feet away. Jasper seems similarly disappointed by the attention he’s attracted, scarpering when he senses an incoming hug.

In fairness to him, the owls aren’t particularly expressive at this point either. There’s a lot of new stuff going on and they’re visibly cautious. Once they settle down however, they begin attempting flight again and this captures Ida’s attention. 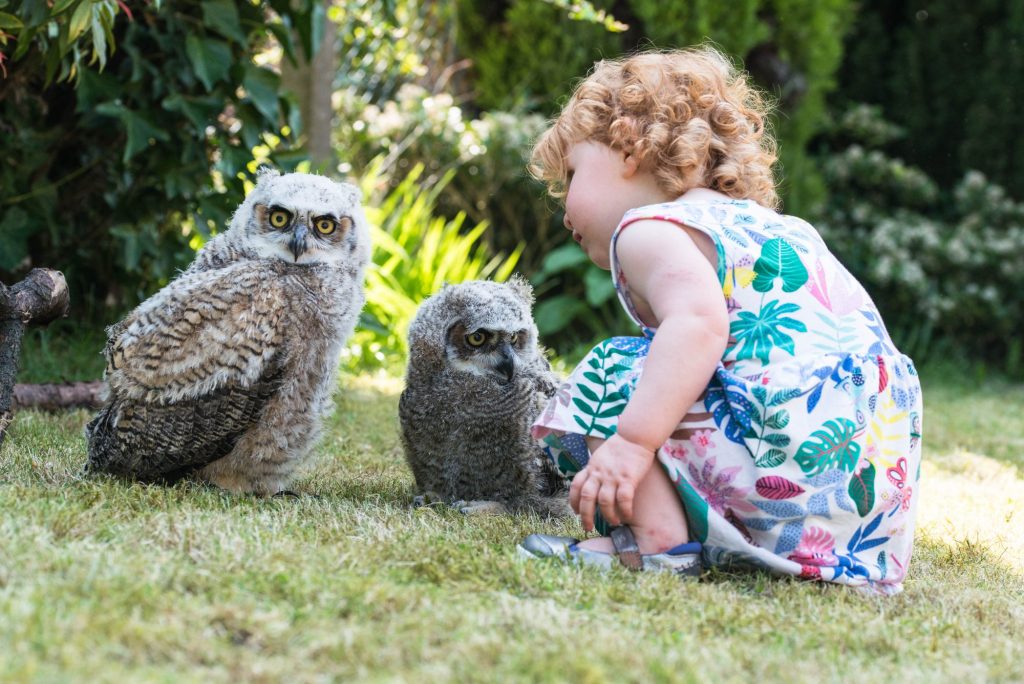 Ida’s the most unknown and bizarre/unpredictable of quantities that the birds have yet come across. Likewise, the same is probably true for her, with the exception of her uncle.

But the two parties are perfectly happy being close to one another. Ida is naturally very gentle when extending a hand to stroke, while there’s no sign of discomfort from the owls themselves.

And there was me hoping for bloodshed.

Owls vs Cat – the lamest battle since BvS

Speaking of battles – Jasper. Both Anna and I were curious about how he’d react to the presence of great horned owls in our home. Would he feel he’d been replaced? Would he try and eat them? Would they tear him to shreds? Would I care?

Turns out, neither party seems to give one solitary shite about the existence of the other.

Anna is relieved, while I’m a little disappointed that we won’t be hosting any Nat Geo’ death-match shows.

We’ll certainly not be leaving the three alone together, but when they do notice each other, there’s no tension or signs of aggression from either.

Unless you count shitting all over the floor as a sign of aggression. I’ve always used it as more of a deflective tactic in awkward social situations, than anything else.

Not that I’d need one.

Week Two down, still no disasters

Veritable tidal wave of rancid poop to one side, it’s been a reasonable, disaster-free week. The birds have adapted well to their new diet, are starting to flex their wings a bit and are getting a decent amount of variety, in terms of human interaction.

I can see next week getting interesting. Slow as their progress toward flight has been, I expect that to end up being something that changes over night.

But so long as they don’t start flying onto/climbing over furniture and picture frames, I’m that’s something we’ll be able to manage too.

He says, with ill-earned confidence.