“Woah, hold your horses (because you probably bought one of those instead of paying me, too). What the fudge do you mean – you’ve bought a bike?”

“No, I won’t stop ‘smiling like that’ and I’m not particularly concerned if the look in my eyes is ‘unnerving’. I am well within my rights to ask; who the fudge considers it remotely professional or appropriate, to spend money owed to someone else for services successfully provided – on a fudging bike?!” 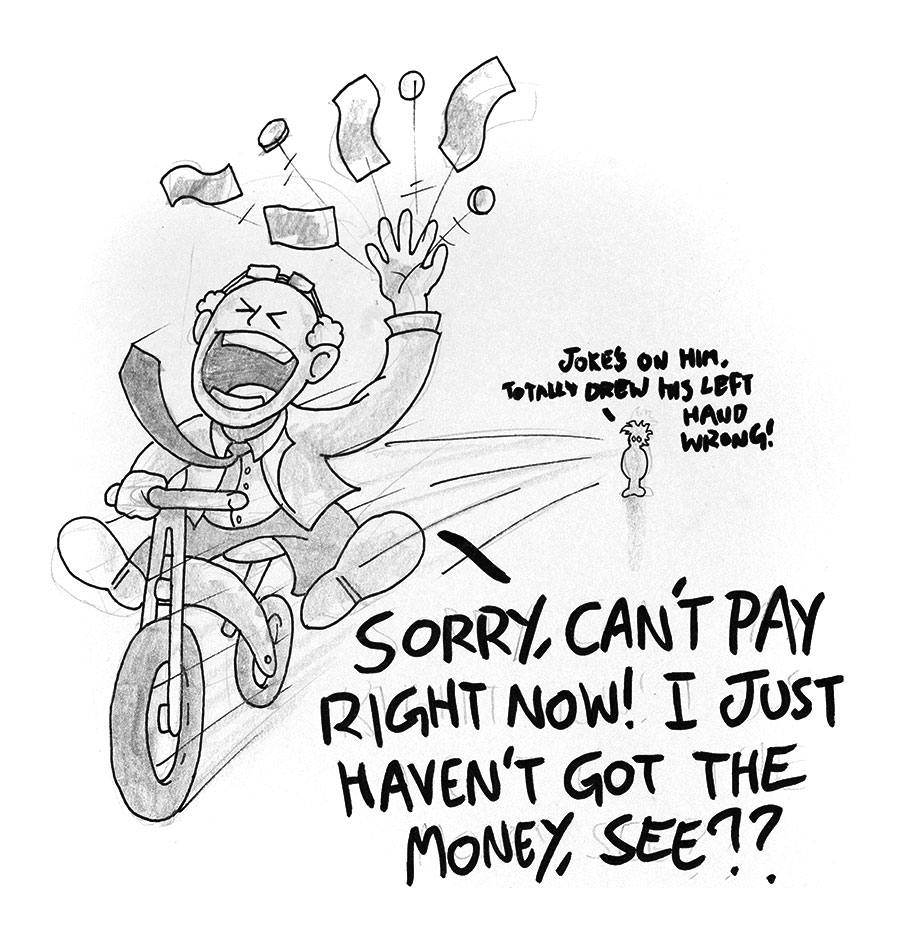 “No, you’re quite right, this is doing my blood pressure absolutely no good. Please, just give me a second to collect myself and better express my perspective.”

“Oh, that’s wonderful, I am so very happy for you. Genuinely, I do so hope this item brings you the lease on life and inner peace that you’ve so clearly earned.”

“But would it not be proper to pay for the work which helped cultivate enough expendable income for you to purchase said luxury, first?”

“Say, why not sell the fudging bike and wire me the pennies I’m owed… please!?!?!”

I got this a lot, in my early years.

Not only with bikes – even by my standards, that would be quite an impressive, if unfortunate market to corner.

Nope, I’ve heard it all: shoes, tables, pets, holidays, lunch, I could go on.

Over the years, I’ve amassed quite the list of crap that client’s have deemed a higher priority than paying me. Its size is comparable only, to that recited by my better half when I enquire as to which aspects of my personality she’d most appreciate me improving – or removing entirely. 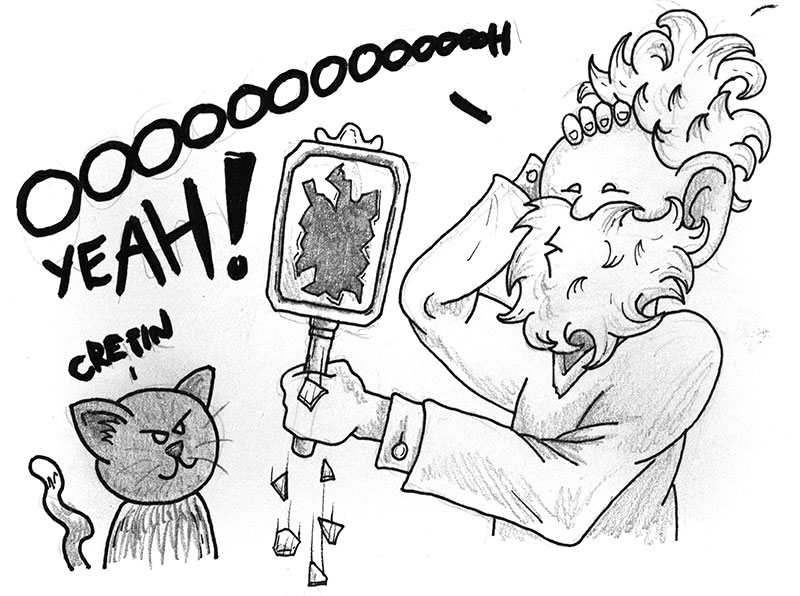 That ‘type’ of excuse

I file this sort of nonsense under the ‘I’m naff at managing my finances, which is now your problem‘ category of totally avoidable ball-ache.

Just to clarify, I’m not talking about someone wanting to re-address their current payment structure before it becomes a problem. These are occasions where they’ve recognised an issue is looming and have taken the front foot to resolve. I always appreciate this and will address those occasions at a later date.

I’m specifically targeting those who believe it’s reasonable and justified to take your work, do what they want with it and fail to pay because… well, sucks to be you?

Few things will cause you to scream at your computer, or assault the neighbour’s cat (if scared of your own) quite like a client expecting you to foot the bill for their financial mismanagement.

The foolishness of youth

As mentioned, instances such as these mainly occurred during my early years.

I’ll admit that due to a mix of naivety, self-loathing and classic responsibility dodging, I’d often roll over. I let people keep the work for free or determine their own payment schedules on a whim, because I’d convinced myself that this was good service and would secure their custom for the long term.

Exactly why I’d want more work from people who thought this behaviour was acceptable, was a question I dared not ask. Probably because I didn’t want to cry myself to sleep in the corner of my office. 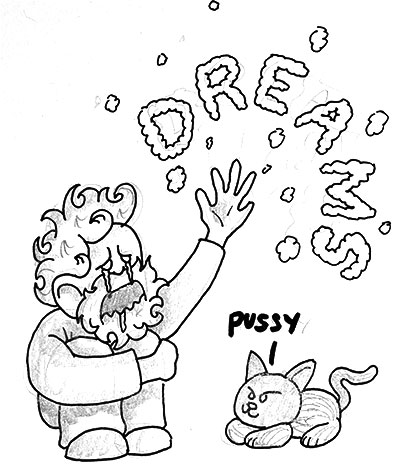 What’s more likely, is I was a young freelancer desperate to make the right impression and earn my clients’ trust. I would accept difficulties imposed unto my business if it meant fewer imposed on theirs. Superficial nobility to one side, this a tragic, utterly self-defeating logic that I’ve seen cost many people their motivation for self-employment altogether.

It leads to situations like those outlined above, where the client’s valuation of the skill, love, attention to detail, hard work and late evenings you’ve invested into empowering their business, is encapsulated by their preference to buy themselves a toy over remunerating you for that contribution.

It’s a question of being taken seriously. You and/or your work.

In these instances, my work was absolutely not being taken seriously. I believed I was providing good service, but few downward spirals are as grave as those born of noble intent. The effects of which can quickly, severely snowball.

Damage can be far-reaching

It damages your cash-flow, mood and disposition towards both existing and prospective clientele, all of which can very easily bleed into your home life – if you even have one, by this point.

But recognise – my failure to be taken seriously was no-ones fault but my own.

You dictate the way your work is perceived, not just through your standards and track record, but in how you interact with clientele.

Enjoying successful self-employment is as much, if not moreso about solid business management, as it as being good/productive in the service you’re providing. It sounds obvious and some people understand this quickly – I am not one of those people.

Theoretically – sure I understood, but not in a practical sense. It wasn’t until I reached the end of my rope that I acknowledged the importance of balancing the two things.

That changed when I started refusing to accept bullshit like this.

How I would advise you respond...

Take yourself seriously – do not tolerate this nonsense.

As always, words on paper will help you. If you’ve got the job/contract in writing, advise/remind your client as such and that you would’ve preferred they get in touch as soon as they knew they weren’t going to adhere to the agreed terms.

And no, realising this ‘after’ spending money on an indulgence does not count.

At this point, you may wish to enforce those terms or propose an alternative payment plan yourself, which I encourage. If the client is saying the problem is ‘I can’t pay’ but not bringing you an actual solution, this is an opportunity for you to be pro-active.

Take the upper-hand and serve the best interests of you both – that’s good service.

You may wish to break the remaining balance into smaller invoices due over the following weeks. Alternatively, offer them more time to pay, but with the inclusion of a small penalty for the inconvenience… possibly worded with slightly more diplomacy.

Some folks are totally cool with this. I’ve also had people ‘refuse to pay penalties on principle’, which always struck me as ironic. It was only due to their apparent lack of principle that a penalty was being imposed in the first place. 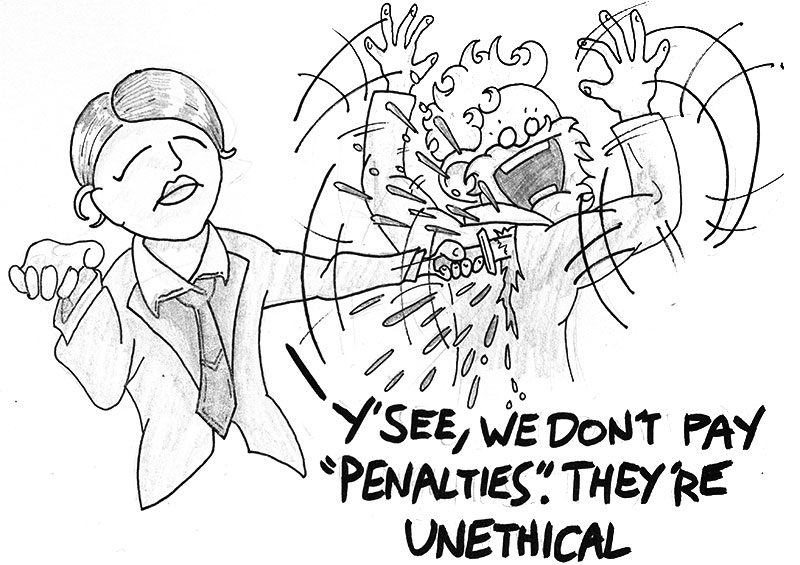 However, if they outright reject and continually fail to provide an actual solution to the problem, politely remind them that their financial concerns are not yours and nor will you be picking up the bill for their financial miss-management.

You’ve done everything within your means to accommodate their needs. However, that does not extend to putting your own business interests in jeoprady.

If they continue to fudge around, begin legal proceedings. If you’re in the UK, a letter from  The Thomas Higgins partnership is usually enough to get the situation resolved.

Funny how often it turns out they really did have the money all along, once you get the law involved. 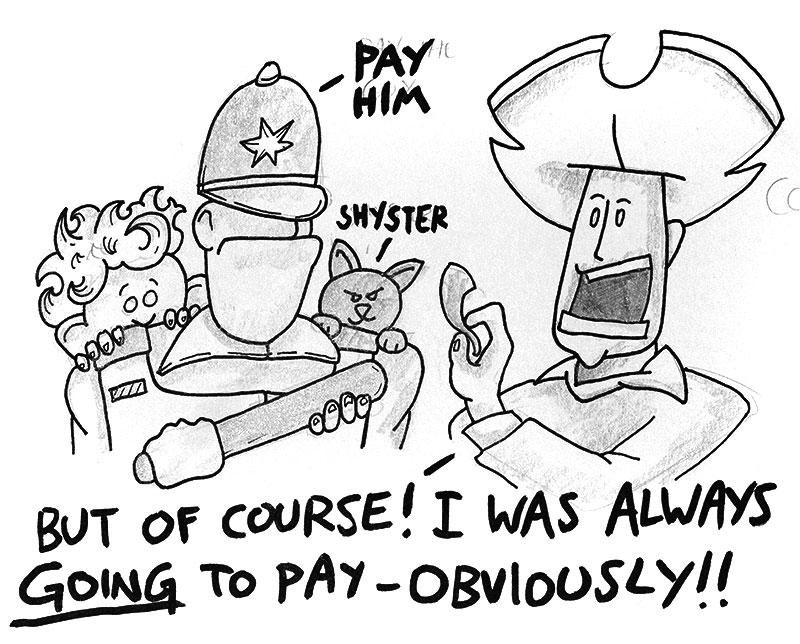 However, if the specifics of this job aren’t in writing, you’re essentially at your client’s mercy.

I might be wrong about that and it’s admittedly been a while since I scrutinised the law.

But it’s like Judge Rinder says – it’s down to you to prove that a legal agreement was in place. It could be that written evidence of terms agreed through email correspondence, might be enough to give you legal backing.

If not, take the upper hand as I suggested earlier. Propose a solution, rather than hoping once will materialise out of thin air.

Again, for the sake of clarity, this is a very different situation to someone experiencing unexpected events and wanting to work with you on an alternative solution.

We’ll get to those later.

All this because of a fudging bike.