Culmination for an exit

In 2008 I was offered a position with an independent shark research company in South Africa, due to start in early 2009.

So that was it, I was done with Krupskaya. I’d enjoyed my time in the band and though I was happy with my contribution to the degradation of taste and class in music, there was a new adventure on the horizon.

We had a five week tour or Europe planned for that year and while the band was set to continue without me, there was a collective desire to squeeze out one more record before I departed, potentially for good.

Musically, our goal with this release was to create the definitive Krupskaya record. It was to combine everything that worked and felt consistent with the tone/approach of the band in previous releases and executed with the benefit of five years experience and higher technical competency.

Naturally, the same was to be said for the artwork.

I made a conscious effort to be more thoughtful and considered with my pre-production on the artwork this time. Due to complications and changes with the various labels we were involved with, it wasn’t until late 2010 that we had a confirmed release date (at which point I was still in South Africa), which afforded me the luxury of being able to plan ahead.

I was reading a lot of Alan Moore at this point and was particularly hooked on a quote featured in Watchmen:

Existence is random. Has no pattern save what we imagine after staring at it for too long. No meaning save what we choose to impose. This rudderless world is not shaped by vague metaphysical forces. It is not God who kills the children. Not fate that butchers them or destiny that feeds them to the dogs.

I love that quote and it resonates with me now as much as it did then (though at no cost to my intolerably chipper demeanour, obviously).

Creatively it is cold, ruthless, straightforward but also layered and rich with texture. I immediately felt an association between it and the music of this new record, which itself was our most precise and uncompromising work yet.

Another quote from the same piece of work further encapsulated the values and themes I wanted to work with this time around:

I sat on the bed. I looked at the Rorschach blot. I tried to make it look like a spreading tree, shadows pooled beneath it, but it didn’t. It looked more like a dead cat I once found, the fat, glistening grubs writhing blindly, squirming over each other, frantically tunneling away from the light. But even that isn’t the real horror. The horror is this: in the end, it is simply a picture of empty meaningless blackness.

In unison, these quotes provided me with everything I needed in terms of a creative foundation and set of thematic rules from which I’d work.

I mean, it was either going to be that – or pandas. 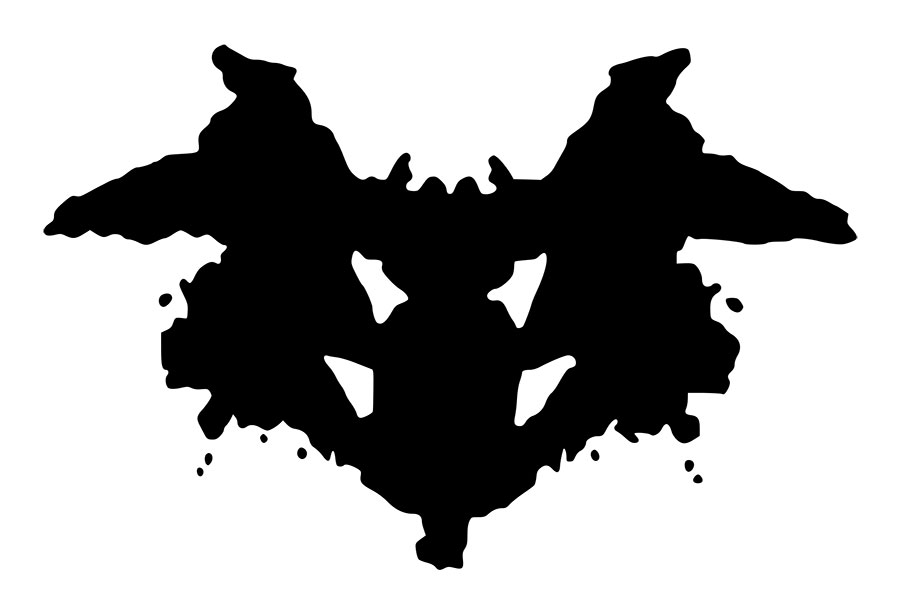 Krupskaya’s music has always revolved around actual events and real-life subject matter, so the artwork I’ve created has always made extensive use of photographic materials.

I wanted to continue this trend, but through a more illustration-based and technically challenging execution. To do this however, I was going to need a centrepiece, a focal point around which the completed art would revolve.

Having already settled on exploring the aforementioned themes, an actual rorschach ink blot made perfect sense. It would be abstract enough to maintain consistency with our earlier work, while likewise being distinct and engaging as a visual centrepiece.

I sourced a number of actual ink blot tests online, combining the various shapes until I had something which I felt had the right amount of variety and clarity (I wanted a shape that was chaotic, but still immediate in how it grabs the viewers’ attention). 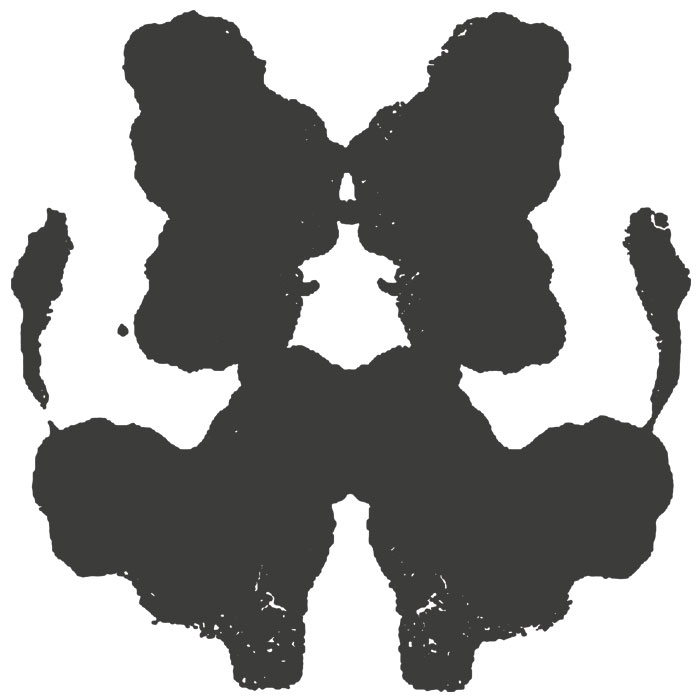 I then redrew the ink blot using shapes and forms that were extracted from various photographs. These photographs specifically related to events or acts involving humankind from throughout our history, many of which are referenced in the music itself.

This gave me the centrepiece I was looking for. Cold, clinical, stark, an endless void of darkness shaped entirely by mankind at its most hostile, careless, naive or exploitative… very happy-go-lucky.

The background was subject to the same core approach, in terms of how I wanted to express the various themes. The key difference however, was that while the central image was a distinct form in its own right, I wanted the background to be more of a pattern, a dense wall of noise through which the centrepiece would carve a hole.

I sourced countless photos which were then collided into one another on a huge canvas. Layers of imagery bleeding into deeper layers of imagery, blended through violence and careful merging in equal measure.

The final piece took several hours to complete, concluding in a pale ocean where every single wave is formed by man’s carelessness, or absolute disregarded for the world around him… without meaning to assume humanity’s gender. 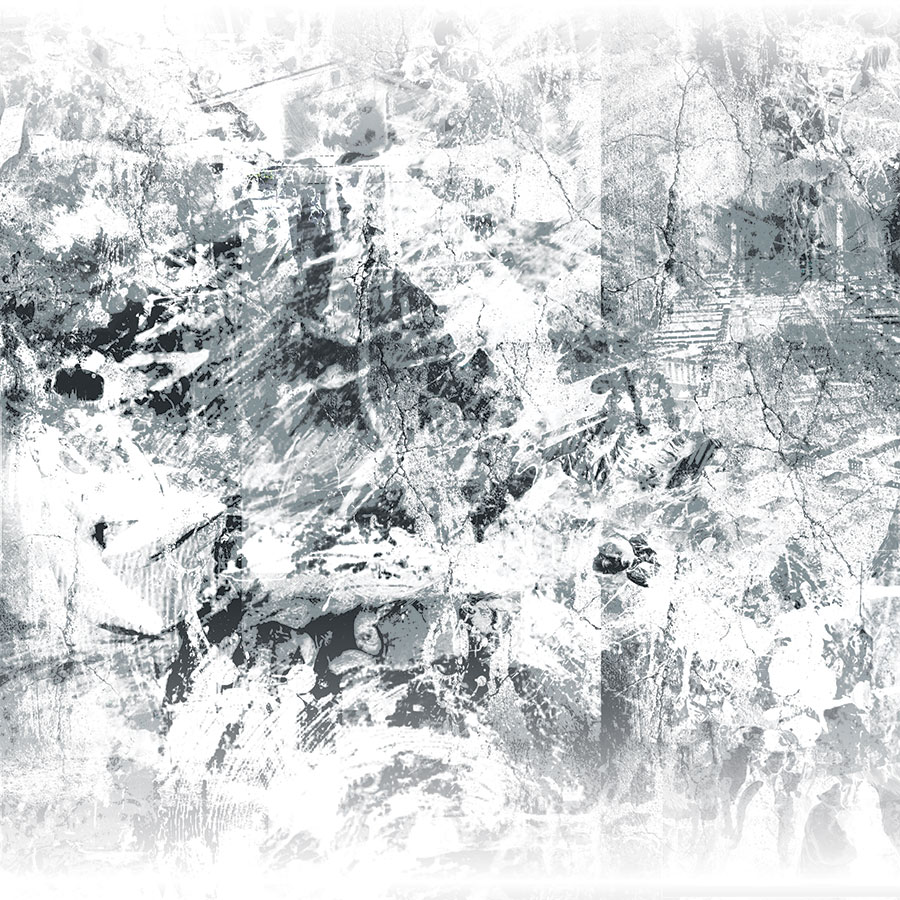 With these two elements completed, I combined them into a final piece. From this, I started cropping squares with a view to finding the best composition.

Simply centralising the rorschach felt too shallow and likewise didn’t encourage, or really even allow for scrutiny of the various finer details. 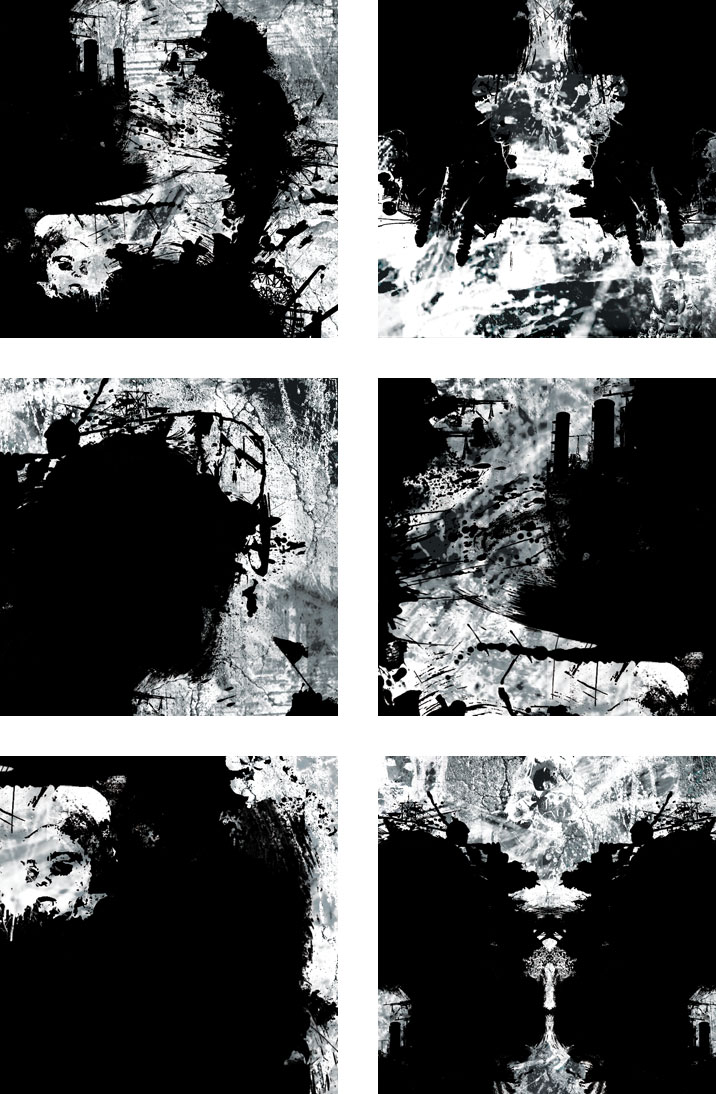 Four crops were chosen for each of the required art panels. I settled on the front cover after finding a composition which featured a decent balance of background and foreground elements, plenty of details for viewers to enjoy and enough space to showcase the actual band logos.

It looked great, but was still lacking something and after reviewing the artwork with Alex, we agreed that some of the grungey, decay-ridden details of the background needed incorporating into the rorschach.

This reintroduced some of the chaotic, noisey abstraction that we’d featured in earlier releases. The image was stark and cold, but easy to get lost in.

The last thing to do was add the band logos, which was initially a bit of a concern because although the composition worked great, the logos themselves clashed with the artwork. It was as if we had this really bad ass background… with a couple of logos slapped on top.

We got around this by printing the logos in silver, so they would capture your eye under the right lighting conditions, but also granted maximum exposure to the cover artwork. 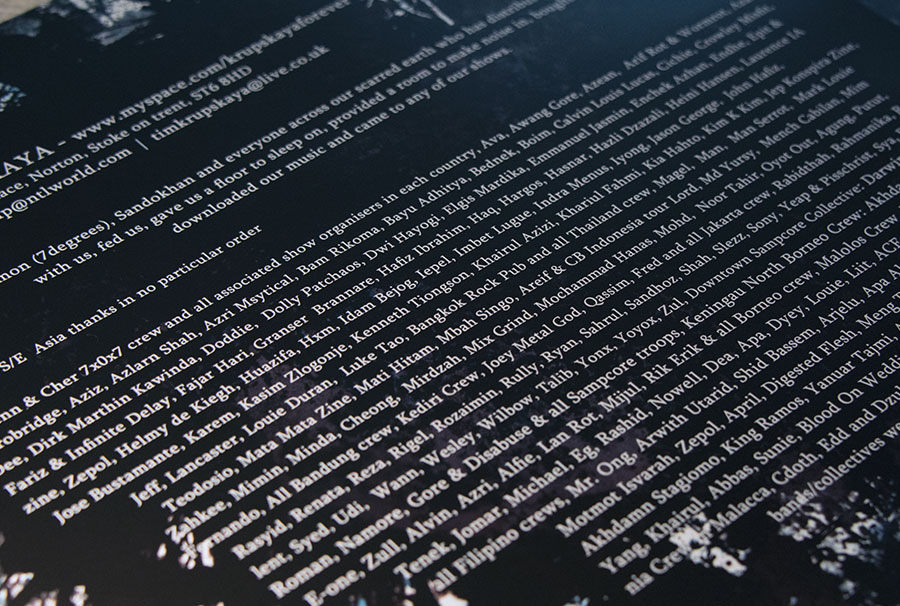 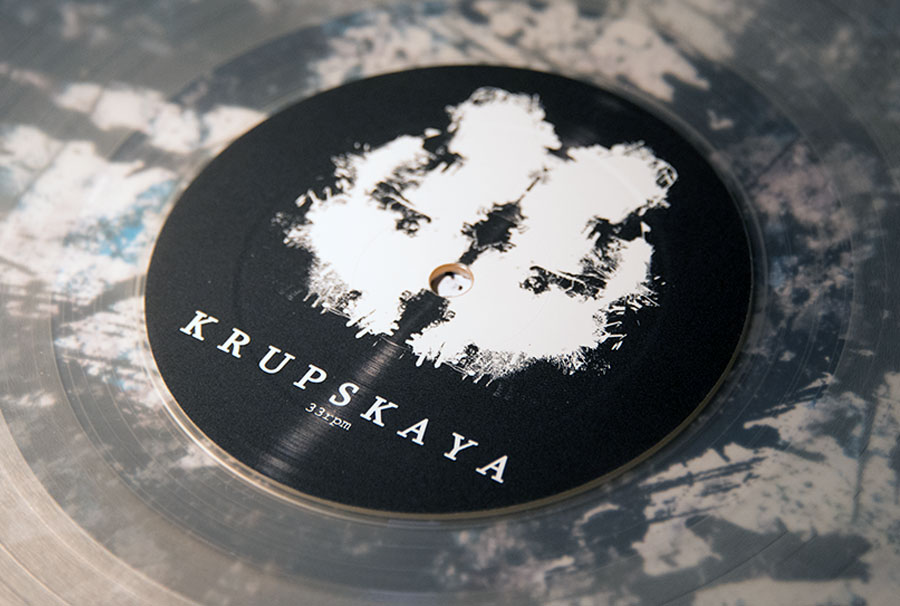 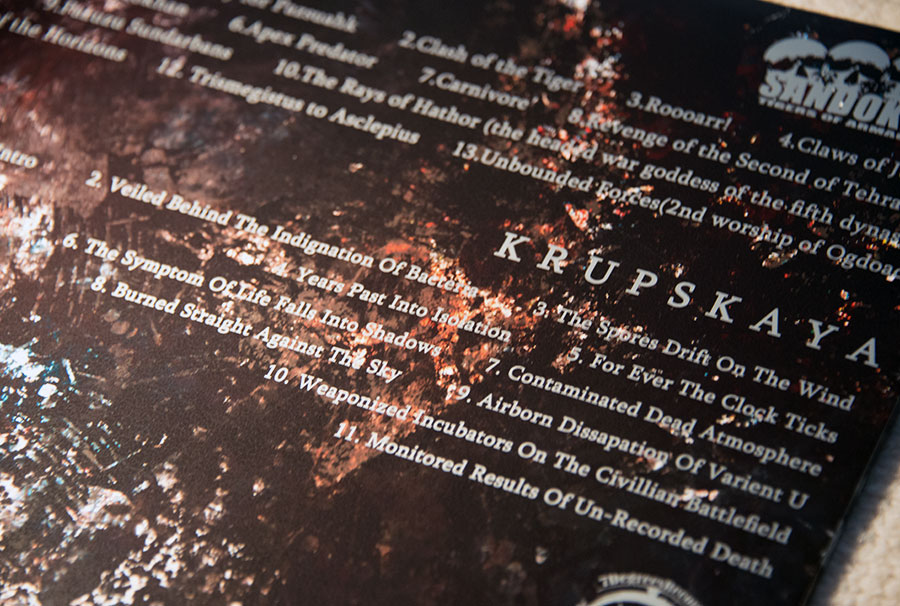 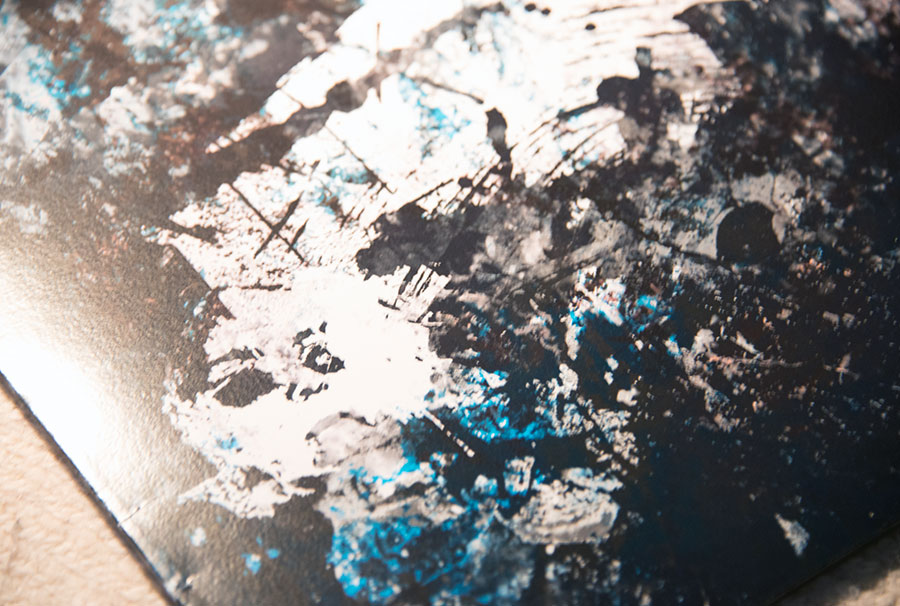 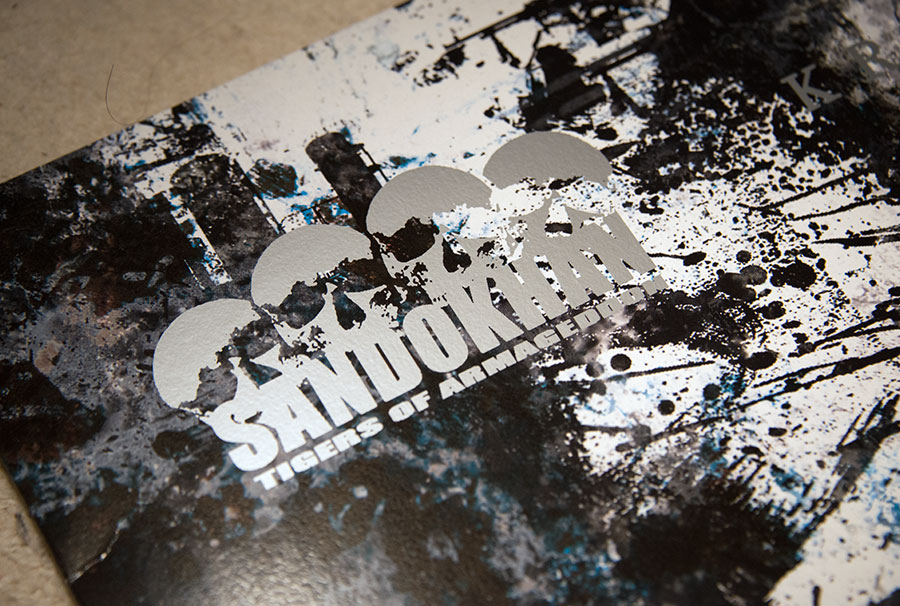 On a technical level, this was (and still is) the strongest singular piece of artwork from our discography.

The harsh, clinical nature of its execution is a direct visual parallel to the approach we took with the songwriting, while the abundance of chaos and texture likewise captures the erratic chaos embodied by the music.

It feels consistent with our other releases but is no less distinguishable as unique in its own right and is the one record I continue to be asked about when we’re on tour.

Folks dig it and feel compelled to ask questions on its meaning and approach.

Yes, 99% of those questions might very well be “What the bloody hell is wrong with you people?!”, but I’m not one to get hung up on such minor details. 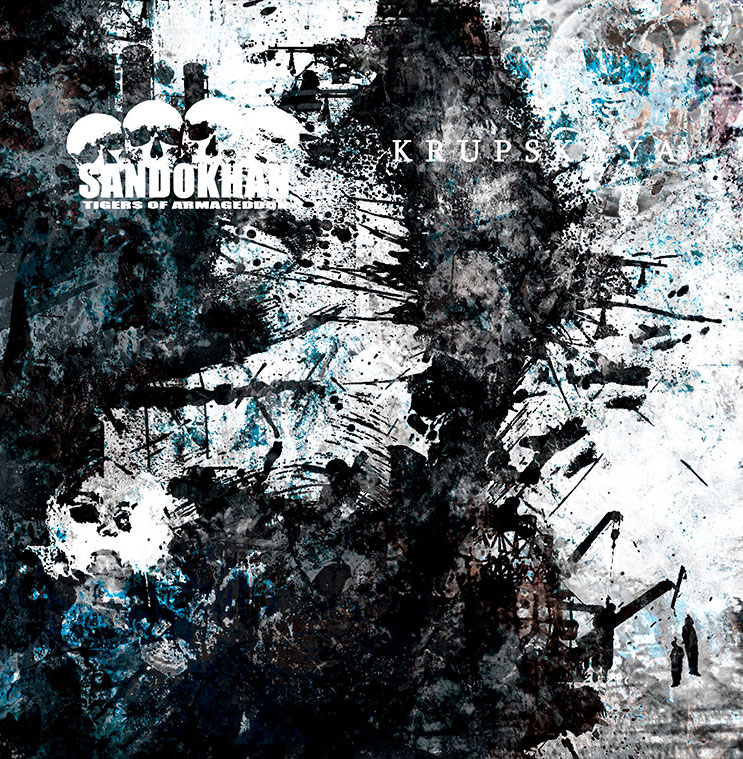