…is what I  would be saying, if I was either A) planning a particular type of shark tagging trip a few years back, or B) a massive twat.

Thankfully, A is a physical impossibility while B is merely a coincidence.

What I am in fact going to be doing for the next three weeks (in theory, more on that and the associated ‘Free Willy’ a-holes later), is assisting an ongoing research project which focuses on the foraging behaviour of great white sharks in Gansbaai, South Africa.

Through innovative, non-invasive technologies, we’re aiming to build upon an existing dataset and fingers-crossed, uncover some of the mysteries behind these animals’ day to day life.

Thinking about it, the title of this journal entry is quite misleading and could in fairness, be considered the absolute antithesis of what we’re actually aiming to do, from practical, scientific and ethical perspectives.

Life through the eyes of a great white shark

The project itself is all about CATS. Not the little soulless little domestic terrorists who cover your arms in scratches and house in shit, rather a camera/accelerometer solution which can be attached to free moving animals with minimal fuss.

Tags in general are a big deal in wildlife research, because capturing the movement of endangered species goes a long way in furthering our knowledge of their day to day behaviour, thus informing conservation policy.

The sort of tags we’ve most commonly used in Gansbaai can be attached to white sharks with a wee bit of force from a long pole, hence the  poking  mentioned earlier (there’s really no non-suggestive  way of saying it). The process is generally easy, inexpensive and is yet to show any clear evidence of having an effect on their natural behaviour.

Here’s a short video we put together on manual acoustic tracking, back in 2012… ugh, I’m old.

The benefit of CATs

While this is a decent approach, what makes CAT tags an even more exciting prospect is their range and relative ease of application, even compared to these methods.

They’re attached via a clamp to the side of the dorsal fin, which is far less invasive, though arguably requires more skill to deploy due to the short window of time in which the fin is accessible above the surface of the water.

National Geographic featured a few clips of this process and the team of uber intelligent folks I’m going to be helping:

Once the tag is attached, it spends a few days collecting data and in our case, filming footage. Eventually, the battery in these CATS expires as does its connective adhesive. The tag is then released from the animal’s body, rises up to and floats upon the water’s surface, where it emits a signal which we can use to track its location and collect it for study.

This is the third expedition for the project, the second I’ve been present for and if the content sourced on the previous trip is anything to go by, we should be gathering some incredible content.

Seeing the shark’s world from alongside their dorsal n as they cruise just beneath the waters surface or investigate the kelp forests, is as scientifically interesting as it is visually compelling. These animals never stop and as is the case with science in general – the more we learn, the more questions end up being raised.

However, whether we’re even able to get a single tag attached during this trip, will depend very much on the presence of the one predator that even great whites have every reason to fear…

Orcas - The Hannibal Lector of the Ocean

Recently, great white sharks all but disappeared from Gansbaai’s waters, following sightings of Orcas (more commonly known as  Killer Whales , or in my opinion,  dickheads ), which isn’t uncommon as, Orcas are known to feed on great whites.

What’s alarming however, is that three shark corpses have washed up in the last couple of weeks, each with their livers removed, suggesting that Orcas are actively targeting these sharks in some sort of bizarre, ritualistic homage to The Silence Of The Lambs.

The story has made international news, with even the Daily Mail taking a break from their usual vilification of all minorities to cover the event: 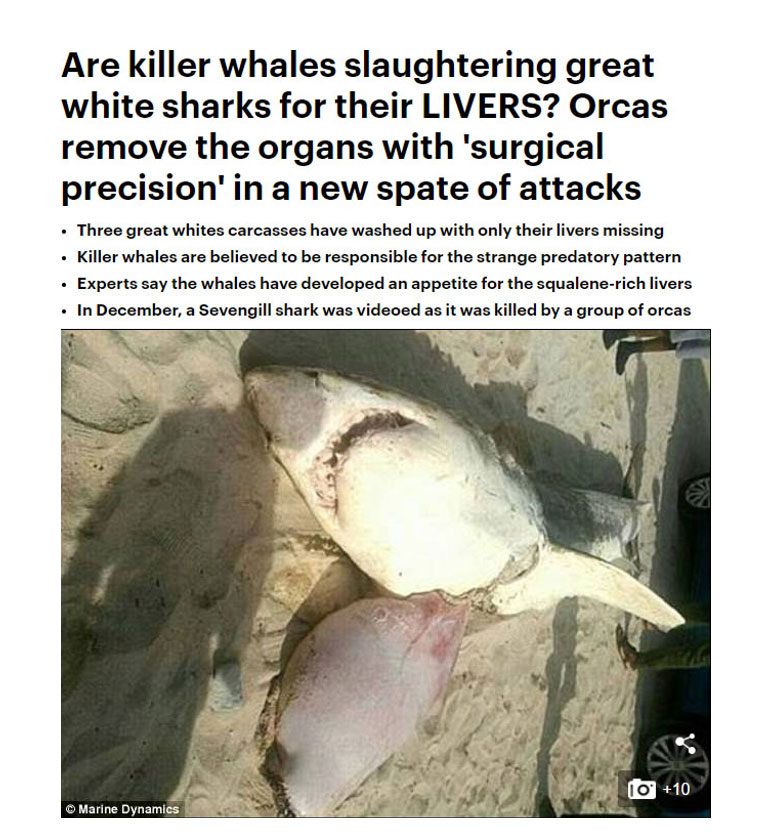 Even after Orcas leave an area populated with great white sharks, the sharks themselves are known to avoid said area for entire seasons, depending on the part of the world they’re in.

While this is the nature of science and the occurrence represents a fantastic opportunity in itself – it doesn’t make it any less of a ballache.

Wildlife – rarely does things  exactly how you’d like it to.

This is the first South African trip I’m making in the last ten years, where anything that even remotely resembles ‘normal work’ is being let behind, allowing for the full, unadulterated focus of sharks and their related activities.

Or, as is looking quite likely, three weeks spent gorging on wine and cheesey garlic bread while lamenting the presence of knob-head killer whales, hell bent on ruining my fun and the progress of science by chomping the greatest of sharks species into extinction.

No, I’m not being overly dramatic.